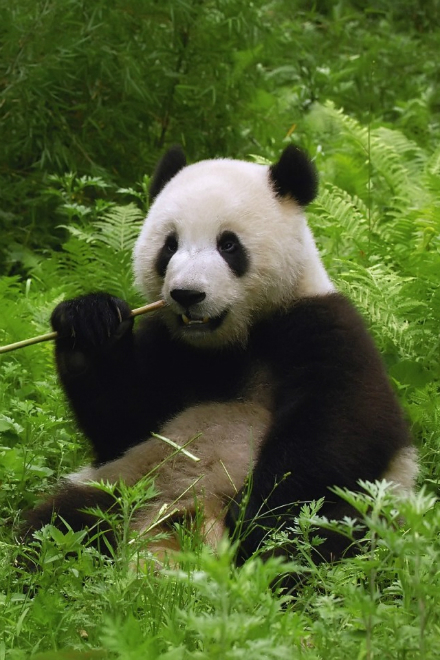 After some conversations (and a few cute panda videos)with a friend I realized that maybe an animals history is just as important to remember as a human beings history. The fact that so many of them go extinct or are in danger of becoming extinct is a tell tale sign of how we, as humans, are able to effect the habitat of other creatures of this world. And I want to be conscientious of that.

I do realize that many of the animals that go extinct do so because of natural causes. I am not so daft as to think that humans cause all the grief on this planet. But in this scenario, with regards to the Panda, I think we did fail them and we do have a certain responsibility to help those animals that we directly impact.

The panda's food source has been greatly diminished. Being an animal that has a diet of 99% bamboo, when the bamboo is greatly reduced, the species numbers falls as well.

Every day giant pandas need to consume about 26 to 84 pounds of bamboo. As more and more of their natural habitat is being eaten up by development, they also lose access to bamboo, which can lead to their starvation. Giant panda bears also have a low reproductive rate, with the females only able to become pregnant for two to three days each year.

And, I can honestly say that humans are stepping up to ensure that the species is taken care of. We are doing what needs to be done in order to save the species that we've directly impacted. And we are taking responsibility. This is a good thing... to see we aren't just forgetting about the other animals on this Earth as we forge our way through the lands. The panda bear was on the endangered species list with only (roughly)1600 in the wild . It is now listed as "vulnerable. There are 1864 Pandas now roaming the wild...(excluding dependent young) ...

According to the American Heritage Dictionary, the English word for panda is derived from French. This is probably because the first westerner who saw a panda in 1850 in Baoxing was a French missionary, P.A David. The people of that area used the Nepali word “nigalya-ponya” (means eater of bamboo) to describe the panda, but David possibly altered to the modern word “panda”.

Peace and Friendship
Although the panda is classified in the taxonomy of living things as a carnivore, its diet is primarily herbivorous. And it has very docile temperaments, almost not actively attacking human and other animals. Therefore, panda in Chinese culture is regarded as the symbol of peace and friendship. 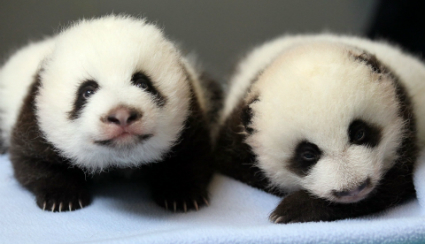 If you see a Panda in your dreams:
To dream of a panda means a need to stop focusing on your worries and problems – what we resist persists.

Pandas also are thought to be balanced creatures, the black and white of their fur getting them the recognition of being the physical manifestation of the "yin-yang" symbol. The panda has significance even in the art of feng shui:

The bear is important to the concepts of feng shui, the Chinese art of harmonizing humans with their environments. According to this philosophy, a bear represents masculine energies, and placing a figure of a bear in the home -- particularly the main entrance -- helps to protect the house and its inhabitants. Also, placing a bear's image in the part of the home where children might reside helps parents to give birth to strong, healthy baby boys.

Some Facts:
Pandas have roamed the Earth for over 2-3 million years. They spend 14-16 hours eating and their diet consist mainly of bamboo. (They have a special lining in their throat to protect it from bamboo splinters) But they also are known to eat small rodents and in captivity are fed things such as mango.

Pandas are normally born in August or September, the mating ritual takes only 2-3 days and once done, the female panda will chase the male panda out of the area. Female pandas can't conceive until they are 7 years of age. Usually the cubs stay with the mother for 2-3 years and that is one reason they have low birth rates. In captivity, pandas have twins more often then they do in the wild.

They have a very good sense of smell and can find bamboo even under the dark of night...which is good because they can eat anywhere upwards of 25-30pounds of food in a day, sometimes up to 100 pounds in the spring. Unlike other bears, they don't hibernate. Pandas are loners, it is very rare to see more than one at a time out in the wild. They have also developed a modified wrist bone so they can grasp, peel, and eat the bamboo in under 40 seconds... 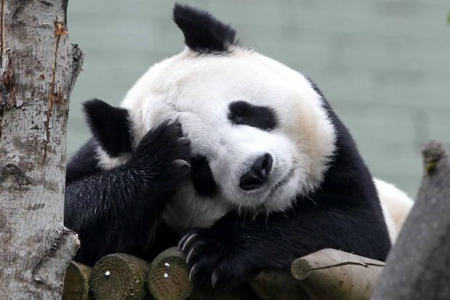 The Dark Side of Being a Panda:

Because pandas are thought to have medicinal properties/qualities to them, they have been hunted throughout the ages. The pandas pelt can go for as much as $60- 100 thousand and the gall bladder of a bear goes for around $3000 on the black market.


Chinese used to hunt pandas for their pelts because it was believed that sleeping on panda fur could ward off ghosts and help regulate a woman’s menstrual cycle. They also thought panda urine could dissolve a swallowed needle.


They were hunted for the longest time freely, it wasn't until the early 1960's that hunting Panda bears became illegal. Yet that still didn't/doesn't stop poachers from killing them, especially when people are willing to pay such high amounts for their pelts and meat. As recent as 2015 there were poachers arrested...

Traditionally, eating a bear's gallbladder and bile was said to have medicinal powers. Unfortunately, bear farming, which uses some 10,000 Asiatic black bears to harvest medicinal bile and which generates almost $1 billion a year, is China's "most brutal operation," according to Peter Li, China Policy Specialist of Humane Society International. However, Dr. Li says beliefs about such animal cruelty is slowly beginning to change with the rise of animal welfare organizations in China....

In 1368 – 1644 AD, during the Ming Dynasty, the panda was described as having great medicinal value. It was believed that the panda’s pelt has a magical influence that could prevent tumors and repel plague. They also believed that drinking panda urine can dissolve impurities consumed by an inattentive patient.

Long, long ago, the Giant Pandas lived in the high mountains of Tibet. Their fur was completely snow white. They were friends with young shepherdesses, who watched their flock in the mountains around their village. One day a mother and her cub were playing with the shepherdesses and their flock when a strong and hungry leopard attacked the cub. The shepherdesses tried to save the cub but were unsuccessful and the leopard killed them...

Long ago, God owned two beautiful white bears. It only remains pure white because of the pure thoughts in the people’s minds in the sky world. God took care of them very carefully by feeding them only the best quality food and fruits. There was nothing in the sky world those two bears have never eaten before...

So, not really the complete story, but hopefully enough of an introduction to the history of the Panda.

As always, thank you for reading this and hopefully you find something out ya didn't know..
blend57

Your own predispositions make you biased towards these goofy looking things.

Unfortunately we humans are like the plague to the natural world. We've caused many extinctions already and will cause many more..

Haha!! I've never seen those before. A panda bully..who hangs out in the grocery store..terrorizing innocent shoppers..who would've thought it?

Thanks for the laugh...

Thanks..we humans do mess up a lot of stuff. But, it is a positive thing that we realize it and try to fix it. Before we never cared, just kept doing what we were doing and to hell with the consequences. Now it seems as though we recognize the harm we cause and try to minimize it as best we can. That is a good thing, and will only continue to get better as we become more aware. That's how I try to think about it anyways..moving forward we'll be more cautious about what we do and how we do it.

Pandas aren't goofy...ok, well maybe a bit..and clumsy too..they seem to fall all over the place, spend more time on their butt than on their feet..lol

Still..their cute in their own way...

this is interesting, they nurse on panda mothers teets though?

posted on Mar, 5 2017 @ 09:15 PM
link
i read and seen on tv they are very scent orientated,,, fickle picky sorts when it boils down to mating and making a baby...found a tid-bit
pandas in the wild are very sacred in china, is what i know about them....lord god i love them!
thanks blend, they mean a bunch and so do you for your great thread work!

Quite adorable little creatures aren't they? And thank you for the extra tid bid you linked peppy..will have a look at it in a few moments. I know they are sacred in some areas of china, even thought to be good luck and bring you good fortune.

A symbol of peace, they have been given out to 23 other countries as a show of diplomacy:

A long read at that link...

Thanks for the interest!
blend57

You always give information very entertainingly and I enjoy your threads.
Memphis is one of the few zoos in the US (not a fan) with Giant Pandas on lease from China. They have yet, last I heard, to produce an offspring. Hmmm, wonder why? Anywho...

Closer to me is the Zoo Knoxville that only has Red Pandas which aren't really related to the Giant Panda other than millions of years ago, they had the same ancestors. I suppose that does make them sort of related in the way that everyone around where I live is sort of related...

Here's a link to the Panda Cam- Big Brother Always Watching-(no wonder they can't 'get in the mood')... at Memphis, it is off line currently, if you wanted to take a looky look.

Thanks, my friend, for the thread and your new shiny colorful avatar!
I love her!