Baltimore PD swamp gets the drain. I think we can all agree that those who abuse the power of the badge to line their own pockets should see no mercy and get the heaviest of books thrown at them. These wolves in sheep’s clothing are charged with very serious crimes – the type of corruption you expect to see in movies:

Seven Baltimore City Police officers are being federally indicted for a racketeering conspiracy, according to the Justice Department, in an investigative case that was secretly conducted and kept quiet about even from the city's State's Attorney.

The arrests of the officers allegedly involved in racketeering were announced in the U.S. Attorney’s Office on Wednesday morning. The accused officers were reportedly robbing victims ranging from $200,000 to a 'couple hundred dollars,' filing false affidavits, and making fraudulent overtime claims while officers vacationed in Myrtle Beach and gambled at casinos.

…One of the officers was also accused in a separate indictment of participating in an illegal drug organization and tipping its members off to investigations.
…Sometimes, narcotics and weapons were seized in addition to money and, "in several instances, the defendants did not file any police reports," the indictment alleges.


See the article(s) for specific details on their crimes. These 7 abusers are the worst of the worst.
Thankfully, there was no attempt at cover-up or ‘protecting their own’ in this scenario:


The Baltimore DEA’s Assistant Special Agent in Charge Don Hibbert explained that the DEA was conducting a probe when they "discovered information in the course of our drug investigation and we were able to work with our partners at Baltimore PD and the FBI and passed the information along and it worked the way it should” have been….
…Commissioner Davis did recognize the "apparent irony" that these overtime claims were being made at a time when the DOJ was conduction an investigation into the police department's civil rights violations.


There were reports of issues years ago, including several lawsuits:


Some of the officers have long been accused of using excessive force or of other wrongdoing. The city has paid out more than $500,000 in settlements in cases involving the officers, according to a review by The Baltimore Sun.

Members of the city's state legislative delegation called for a federal investigation into Rayam in 2009 after he was involved in three shootings over the course of two years. The city has settled multiple lawsuits involving Hersl.

"The majority of these officers have been known to my attorneys as having significant credibility issues," Baltimore Deputy Public Defender Natalie Finegar said. "We have aggressively been pursuing personnel records to be able to highlight the issues with their credibility on the force."

As recently as October, the Police Department was praising the unit in an internal newsletter for its work getting guns off the streets. The unit made more than 110 gun arrests in less than 11 months last year.


Naturally these inglorious bastards tried to cover their own asses once they found out about the investigation into them – to no avail:


The indictment also alleges that when officers found out about internal investigation interviews, they coached one another ahead of time. On or around September 7, Gondo and Rayam were inside Gondo's Baltimore City Police car. Gondo asked Rayam if he was going to the Internal Investigations Division (IID) to be interviewed. When Rayam said he had to give IID a report on the 15th, Gondo reportedly told 'Sarge' not to 'say anything about the entry.' Later on the 13th, again in Gondo's police car, they "discussed how what is recorded on their body cameras will 'come back to bite [them]' and how Rayam would meet up with Sergeant A. to "coach him" before the internal investigations interview

In federal prison has to be one of the worst placing for a corrupt cop to end up.
Cop : Federal prisoners :: Chum : Sharks

They will soon be praying for mercy!
They brought a great shame upon their department and all officers who honor the badge and respectfully serve their communities.

Birds of a feather stick together... the level of corruption by the "authorities" all across the board (different cities, different departments, etc.) is appalling

It is mind-blowing. They do well protecting their own too, and that culture makes it much more difficult for whistleblowers to come forward.

Here are your 7 criminals *previously* hiding behind the badge: 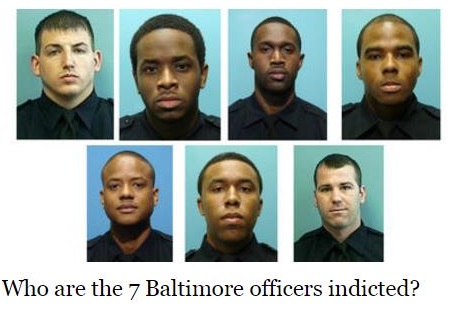 Stole in one way or another almost $1 million.

I hope their families weren't in the know!

originally posted by: iTruthSeeker
Is this a case of Cops robbing drug dealers?

I'm not 100% sure, it is possible that could be the case in some instances (can't rule it out) but here is a quote from the Maryland U.S Attorney:

Rosenstein said that the indictment alleges that these officers "were stopping people who had not committed crimes and stealing money.

So maybe it was both - stealing from drug dealers AND the innocent.
Terrible!

posted on Mar, 2 2017 @ 10:02 AM
link
now, start rounding up any and all that may have been aiding and abiding those scums, the cover my back fraternal solidarity is a thing. thats how to properly swamp drain.
edit on 2-3-2017 by odzeandennz because: (no reason given)

posted on Mar, 2 2017 @ 10:46 AM
link
This isn't surprising. People are not infallible and there will ALWAYS be people who breech the trust given to them. Anyone thinking that cops cannot be corrupted are being naive.

My father was a cop and he used to mention all the time that some cops are crooked. He'd tell me the one thing that kept him straight is that "He liked to sleep well at night".

These cops are out busting dirt bags and may pull up on a 19 year dope boy with $10k on him. The temptation is high.

posted on Mar, 2 2017 @ 11:40 PM
link
its not always about "protecting" the officers. You have 7 bad cops. Combined, how many years in total have these guys put in and how many arrests have been made over that time? If convicted and fired this calls into question everything, all arrests and even cases they were involved in with others, resulting in appeals and retrials of all who can afford a good lawyer. Courts are hammered already, can you imagine, 7 COPS!,,,damn right they might try to keep it quiet. Lol. What a mess this could and will likely be