I fully accept those gold ornaments as being legitimate finds. As a detectorist (as the Netflex called them) myself in the US, I applaud the finders. What I have difficulty with is accepting that ancient goldsmiths could produce such fine, ornate examples of their craft with iron tools in that environment. What training they must have had, resources, equipment and finally the artistic imagination to create such works. Frankly, I see noting better today, and perhaps weirdly, that troubles me to no end.

I posted a thread on the bog bodies a few years ago. One of the many interesting things was trade goods from Spain up in Ireland. I haven't read about goods from up here being found down in Spain although it's implicit in the context of trading.

People often see 'trade route' and imagine people actually travelling the hundreds of miles. Yes, some did, but it would have been more commonplace for foreign goods to travel far by being passed along fairly static communities.

Language-wise? There would have been an ebb and flow between regions with overlapping dialects carried along by the dominant cultures like waves lapping on a shore. Like waves, it wasn't all one way traffic as they'd slosh back and forth.

Your link is interesting and reminds me of a good book called Sapiens. I notice Cunliffe adds the caveat, 'based on those bones' and it highlights the difficulty in generalising from small samples. It doesn't lessen the intrigue though, does it? 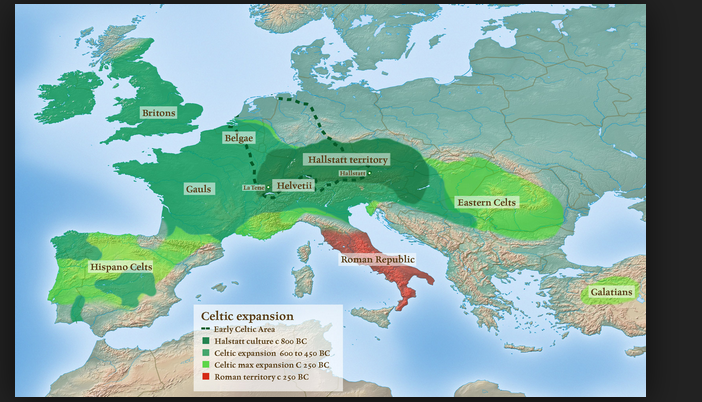 originally posted by: gortex
a reply to: Cobaltic1978

The more I learn about Iron Age Britain the more I think it would have been a good time to be alive , living in small communities growing what you need and bartering for what you want.

Not necessarily. This was the age of the Celts, who were basically small communities that often fought each other (fighting seemed to be the national pastime.) Lots of people died early or had family members kidnapped/stolen and had farms and houses destroyed. And there was disease, high infant and pregnancy mortality (not a good time to be a woman), tooth decay, and so forth. If you were a noble or royal in control of the iron exchange, you did well. Peasants... not so much.


originally posted by: gortex
a reply to: TinfoilTP

They were made at least 150 years before the Roman's first excursion over here so no not Roman.

Not in the slightest. Already answered by others but from an artistic viewpoint the Claudian invasion (the successful Roman attempt) led to a surge in interest in Celtic jewellery in Rome because of the exceptional quality of the pieces.

I'm aware of what my country was like at that time and the hardships associated with living life back then , I crave freedom not longevity so for me being alive then living in a small community at war with other small communities is preferable to living in a large community at war with other large communities .... at least back then they knew what they were fighting for.