posted on Feb, 28 2017 @ 12:11 AM
link
Lots of people have likely become more familiar with America's largest dam, located in Oroville, CA, and the problems that have come up recently. 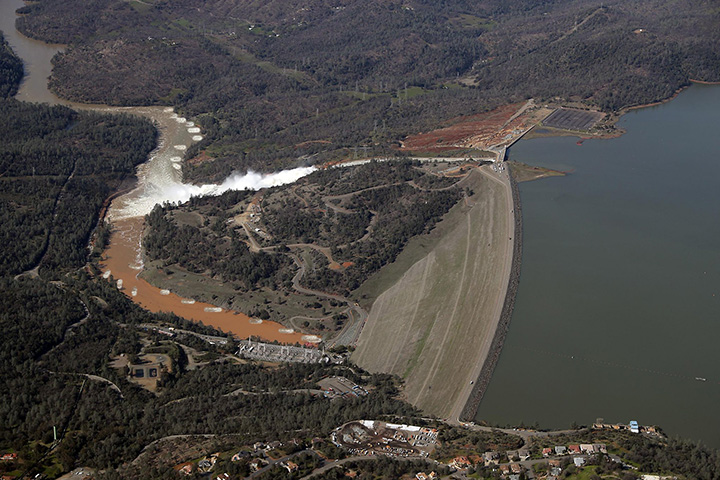 While it's not a permanent fix, I thought of an idea that might help: running several large siphoning pipes from Lake Oroville down to the Feather River below. Using this Gravity-fed pipe flow calculator I can figure (very roughly) that each siphon pipe could remove 1000 cubic feet per second if its diameter was about 5 feet, fed by gravity alone. This could be in place of or in addition to the damaged main spillway. 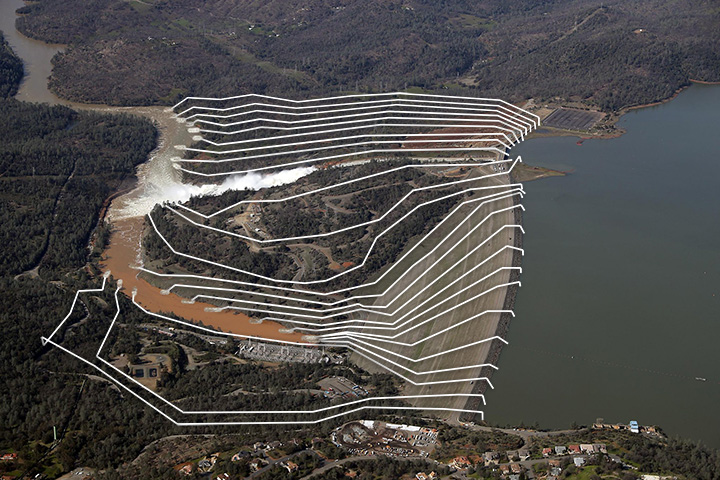 One siphon wouldn't do very much, but 25 or 50 could make a huge difference over time. Thoughts?
edit on 28-2-2017 by johnsequitur1221 because: OCDC is my favorite band ever

The problem with Oroville is not just the amount of water in the lake, but the problem of getting enough water out of the lake to minimize the additional damage to the spillways, making room for additional rain (pouring in record amounts this year) and what is expected to be a record amount of run-off due to snow pack melting later this year.

And all this water must be fed into the Feather River slowly enough to keep the river from flooding the highly populated communities down stream.

Unfortunately, although your solution Would lower the lake level quickly, and relieve pressure on the dam and spillways,it would also increase the flow into the Feather River to the point that downstream flooding might be even worse.

How to fill the siphons?

Nowhere near as bad as an uncontrolled release should the spillways or the dam itself fail. A siphoning network could delay or prevent the dam from failing, saving thousands of lives. It can't be a worse idea than building an earthen dam that big in the first place, let alone without due and timely maintenance.

Probably would need some kind of pump to get it started, unless you know somebody who, oh.. nevermind

So, instead, how about operable drains at the base of the damned dam.

You'd only need a pump to get the movement started, but I admit I'm not sure how to disconnect it once the siphoning effect kicks in. I'm sure it would be more complicated than siphoning off my pool cover, but not impossible. Drains seem like a nice idea, but would be much harder to install during the rainy season. They can't even properly repair the main spillway for several more months if I'm not mistaken.


You'd only need a pump to get the movement started

You did the math so far, what's that volume and how much does that water weigh? How strong does that pump have to be to lift that much water against 1 bar?

Of course, you could submerge the siphon behind the dam, plug the end, then use a crane to lift it over the dam and drop it on the other side. Still the same weight. Calcs?

Nowhere near as bad as an uncontrolled release should the spillways or the dam itself fail. A siphoning network could delay or prevent the dam from failing, saving thousands of lives. It can't be a worse idea than building an earthen dam that big in the first place, let alone without due and timely maintenance.

But the dam, itself, is perfectly sound, and in no danger of failure.

The maintenance issue affected the spillway, only.

The emergency spillway issue was more a basic design flaw traceable back to the limitations of engineering 60 years ago.

Granted, those design issues could have been addressed before this, but since the emergency spillway had never been close to being used, an attitude of "if it ain't broke don't fix it" was allowed to flourish.

My calcs were based on downward flow only, I wasn't trying to figure out how strong of a pump would have to be used. Placing a vacuum (dry) pump near the low end could suck the water up and over the rise as long as it's less than 33.9 feet higher than the initial lake level (assuming standard atmospheric pressure.) Another (underwater) pump could help to push water into the high end and over the rise, and both could be disconnected once the siphoning effect kicks in. Reattach the two pumps to the next pipe, and repeat.

Easier; place a shutoff valve below lake level on the downstream side and take your time filling the siphon to that point. Open 'er up when it's full up. You'd need an air vent at the apex, of course.

I don't suppose they have an online version of a suggestion box? Of course, that would imply that officials there are any less than 100% confident they can solve the problem. Also, even if it's workable, it would probably have to be presented by a certified engineer (which I am not) just to be considered. Red tape you cruel mistress...

Methinks this summer will be a busy time at the dam.

Hopefully this will be the Pearl Harbor of getting us to mobilize and fix our infrastructure. We need a WWII economy and mindset, but without some other enemy to blame it would be tough to achieve. Also that without the lots of people dying and inevitable Michael Bay tribute... that'd be greeeeaaaat.

originally posted by: Phage
a reply to: johnsequitur1221
Big ol' pump. For each hose. Lot of water to lift up and over.

So, instead, how about operable drains at the base of the damned dam.

They can get 16,000 cfs from the Powerplant at the base of the damn but the erosion created sort of a natural dam backing the water up over the exit water from the turbines.

They have shut off the main spillway completely so there is no water leaving now, which allows them to try and dig out the diversion pool that's backed to the base of the dam. I forget but it's something like 20 feet too high.

It should be around a week for that to get turned back on if everything goes right. They've been able to keep the inside of the powerhouse dry somehow.

originally posted by: johnsequitur1221
a reply to: Phage

Hopefully this will be the Pearl Harbor of getting us to mobilize and fix our infrastructure. We need a WWII economy and mindset, but without some other enemy to blame it would be tough to achieve. Also that without the lots of people dying and inevitable Michael Bay tribute... that'd be greeeeaaaat.

Oh I hope so.. (assuming you mean it's already scared people into fixing things, not that it will fail and kill people and then we will be on board?)

It's a perfect opportunity for Trump to mean what he said about infrastructure. And somehow I don't expect him to capitalize on this.


Somehow where I live water mains just break when ever they like and we don't get to have water for days.. it's at least happened twice in a few years.. Making it seem like it's going to be more common going forward.

For some reason it seems like it's more fun to build Nuclear Missiles than pipes and dams and amazing subways and stuff.

I grew out of that in my teens.. Go figure.

The turbine intake is usually well below the top of the dam. Open the intakes wide and drain the lake.

I just did some rough calculations and you've drawn about 27-30 MILES of 60" diameter piping. Forgetting (for just a moment) the hydraulic requirements to get the siphon action going initially, the installation of the pipes themselves would be a MASSIVE undertaking. The environmental consequence of such an operation alone would have all of CA screaming bloody freaking murder! I mean, think about it; you're not just going to lay those pipes on the surface (and certainly not without anchoring them), the forces of the water alone moving through the pipes would rip them to shreds in seconds!

It'd be cool to watch though!!!

The turbine intake is usually well below the top of the dam. Open the intakes wide and drain the lake.

the water won't flow through the turbines right as the outflow from those is like 20 feet under water. The pressure pushing back into the dam would mess it all up.

So that's what they are working on as we speak..

At the same time they also need to re rout power to the dam, cause you can't just run turbines with no power outlet.