...AnBot—a black and white, 149 centimeters (59 in) tall, 78-kilogram (172-pound) security robot that looks like a more efficient R2D2, and a less threatening Dalek—is now patrolling a railway station in China.

...the machine can aid commuters in the station, respond to questions, scan, as well as identify faces, and if deemed necessary, pass these images on to security. The machine’s sensors also allow it to keep track of air quality and changes in temperature. At night, the AnBot can reliably guard the station and alert authorities to possible emergencies, like fires, and recharge itself autonomously.

...This development begs the question: will the progression of robots in public spaces make us safer, or just take existing jobs?

AnBot was developed by China's National Defense University. It was the first security robot used in Shenzhen airport, introduced early in 2016. Now, it's capabilities have been expanded, and it's the first to be used in a train station.

At present, AnBot is not armed. But who knows what the future will bring?

China is embracing robotics and automation across the board - from security to manufacturing. After a huge push to automation in the past few years, it looks like they're positioned to regain lost ground in the global economy - in electronics especially, not just manufacturing.

The article concludes: "Will the progression of robots in public spaces make us safer, or just take existing jobs?"

Unfortunately, along with economic gains come other worries. Like other nations, China is grappling with the problem of jobs lost to automation, and poverty. A minimum income guarantee program called "dibao," started in the 1990s and expanded nationwide in 2007, failed miserably. Corruption and administrative problems are blamed - only 21 percent of poor households got the dibao, and more than half of dibao recipients were above the poverty line.

Now, China too, is looking at a Universal Basic Income to bypass corruption, and to avoid the killer administrative costs and red tape bottlenecks.

...What is different between Universal Basic Income and China’s Minimum Livelihood Guarantee (Dibao)？

Dibao is China’s Minimum Livelihood Guarantee program. Anyone with an income below the minimum can receive a supplementary income up to the standard. In this way, Dibao is unconditional: no one can take away someone’s right to the Dibao income. The Dibao only provides a grant to those that are below the Dibao income standard. Thus, the government must conduct strict evaluations of recipients’ economic situations, which creates a lot of implementation problems and issues of abuse. By contrast, Universal Basic Income provides the grant to every person, regardless of income. Moreover, China’s Dibao benefit has a large discrepancy across different regions, consistent with the regional economic inequality that China already faces. Here is more information for reference: China’s MCA.

...Back in the 1990s, China started experimenting with a minimum income guarantee that topped off incomes to a minimum level set by local governments. China called the program dibao, meaning minimum livelihood guarantee, expanding the program nationwide in 2007.

...A report by the World Bank found that for every 10 RMB spent on the dibao, only 1 to 2.4 RMB reached individuals in poverty (cited by the Economist). The World Bank also found the dibao program only lowered the poverty gap by 6.5 percent.

Corruption and inability to determine households’ poverty status have plagued the program. According to Lu Yang in the Indian Journal of Labour Economics, based on 2010 survey data only 21 percent of poor households were able to receive the dibao, while more than half of dibao recipients were above the poverty line.

Looks like something out of a bad 80s B movie scifi flick.

originally posted by: paraphi
But can it go up the stairs?

Nope, can't go up stairs. BUT - seems the "information points" were added to the PoliceBot for the train station version.

...NDU promises that in addition to standard police patrolling, the Anbot can undertake riot control, by remotely firing its electroshock weapons (or by running over unruly protesters).

...Anbot has several features to take robotic law enforcement up a notch. ...

...Anbot's most controversial feature is naturally the onboard "electrically charged riot control tool" (likely a Taser or extendable cattle prod). ...The Anbot's large size means that it has room to mount other law enforcement gear, like tear gas canisters and other less lethal weaponry.

...billed as the "first intelligent security robot," Anbot will not be a replacement for human police anytime soon. In addition to the obvious need for human policemen to chase after any criminals able to walk up stairs, Anbot's limitations also include human social and emotional intelligence, apprehending suspects (as opposed to knocking them down), and like all robotic platforms, vulnerability to cyber intrusions. However, with its need for minimal human supervision, autonomous response, ability to find persons of interest and collect audiovisual information, and its electrical weaponry, Anbot will be a potential force multiplier for any interested police departments, and as People's Daily cites, will "play an important role in enhancing the country's anti-terrorism and anti-riot measures." 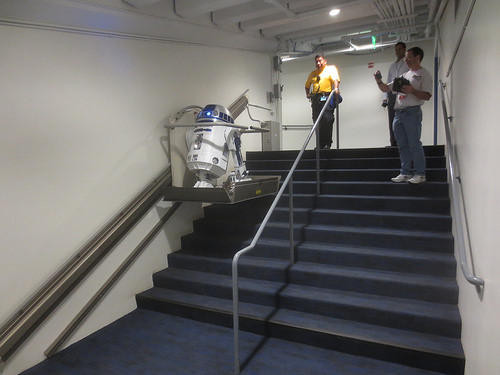 Oh Jesus... look, that thing is not RoboCop. It is not a police person, lacks powers of arrest, lacks the necessary equipment to drop a suspect or detain them, lacks the agility necessary to save a life, chase a crook over variable terrain, pull a suicidal person off the train tracks, or do anything else I expect a police officer to do on a train platform.

Its more like RoboSnitch. Its just a mechanical git that reports on events to a central hub, as opposed to having any wits of its own, AI, or anything remotely impressive going on with it. I am, as a hairy beast of a man with a liking for sharp objects, a damned sight more like Aragorn from Lord of The Rings, than this thing is like RoboCop. It does not even have a taser system!

ETA: I stand corrected, the nonetheless ineffectual waste of components will, at least, carry a taser.
edit on 27-2-2017 by TrueBrit because: (no reason given)

originally posted by: six67seven
Can it withstand a 4-iron to the dome??

No problem - mountable - and it already has tasers. They just added the info capability, and held back on installing the hard stuff.

Abbott... can interact with the public, respond on scene to crimes, and has weapons to knock out human troublemakers.

...“If you ask me to describe the development of China’s robotics industry in one word, I’d choose ‘explosion’,” said Zhao Jie, a professor of mechanical engineering at the Harbin Institute of Technology in the northeastern Heilongjiang province.

According to him, investment and talent are rushing into the industry, with the involvement of giants as well as startups. In line with the trend, the Harbin Institute of Technology’s startup HIT Robot Group launched in 2014, in partnership with the provincial government.

The top-notch university has done years of cutting-edge research into robots. It is the maker of China’s first space robots and lunar vehicle. One of its priorities now is to develop service robots for professional use, such as defense robots.

Some of its anti-terrorism robots, which can sniff out bombs, climb slopes, monitor environment and operate guns, have been exported to countries in the southern hemisphere already, an employee at HIT Robot said.

Technology seems to be slowing down over the years. Probably because of the greed of the rich.

It's being sold internationally already. The capabilities are not all listed - or connected. And I suspect China is holding back a fair bit for its domestic market. No, it's not AI, but it still can make decisions (like to shoot or not) unless that bit is disconnected.

I hope the inventors won't take it too seriously when someone kicks it to try to get a candy bar out of it.

And it can taze you, how sweet.

Just in time for Christmas. 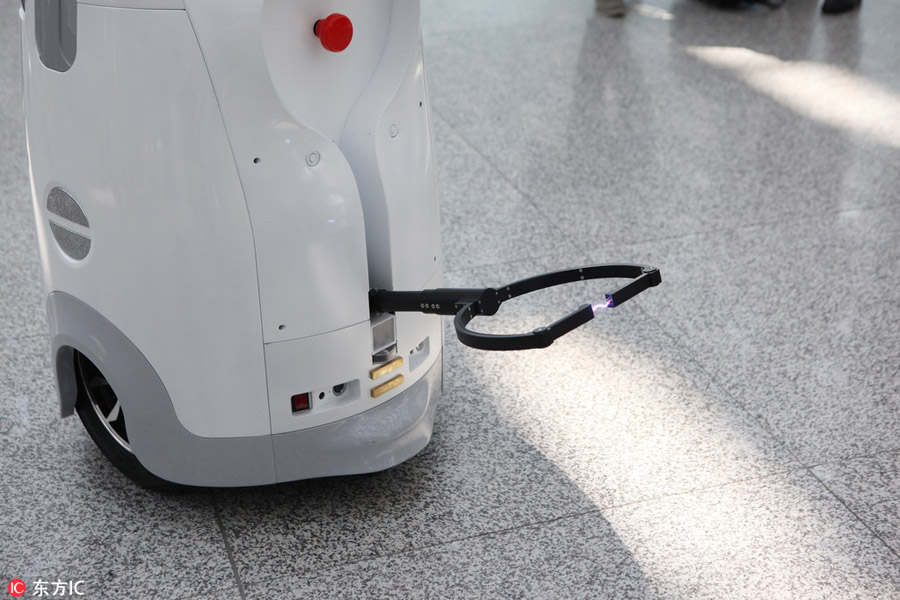 China has the most thirst and desire for all things tech and also considered a rival, yet Hilary Clinton is OK selling out secrets to them.

My post isn't meant to be political, but let's face it from An-robots to iPads, to nuclear tech, there is nothing they won't get their hands on.

So why do we sell our secrets to China again?

Because our economic system is based on capitalism, and the maximization of profits.

Capitalists have NO national or other loyalties. They're in it for the cash. Period.

lol. Yeah. ...If any wealthy person with international corporate assets ever tells you they're a nationalist or a patriot, do not believe them. They are lying. Most likely, they're just trying to crush their competition.

It's all fine and dandy now as cute cuddly metro assistants, but when they start saying

It's all over, we're boned.

edit on 27-2-2017 by Tranceopticalinclined because: (no reason given)