Is it just me or does it look like that recently farted a rainbow?

Is it just me or does it look like that recently farted a rainbow?


We need to learn to pull a nyan cat and learn how to make rainbow fart rockets.

originally posted by: DBCowboy
This was going to be yet another Trump rant about how we'll never agree and how so many are calling him Hitler and a dictator and a Nazi and how the leftists are actually Nazi's and they are the true haters.

If the Bitch of Benghazi had won the election, I'd be hating everyone and everything she did.

I'd be commenting on her stupid cabinet picks, her clothes, her policies. I'd be calling her "Hitlery". I'd be hating her. I'd be angry at everyone who voted for her.

So hate. I cannot, in good conscious, mock that in which I would otherwise do.

I will still point out the ridiculous things people say and make my observations on life on the internet.
Hate.
Hate with every fiber of your being. Embrace the hate.

Well you know that Hitler thread with hundreds of posts got offed yesterday, so it's probably par for the course if you should make another thread calling Trump another Hitler...just like that.
There is a caveat though, Trump does have cultish guys guiding him, how much that rocks Trumps boat is far too early to tell, or even if he gets the picture himself, but I have to say he demonstrates daily heavily dictatorial traits similar to Hitler, while being in a different era now.
I don't like Hillary at all, I like Trump even less, he doesn't really care about little people that much, and certainly in what I have seen of him, IMO, and sadly remarks made while people are cheering and roaring at his rallies.
He does care a lot about himself though. The thing is, Trump is an oligarch, not the biggest one in the world but an oligarch nevertheless, and even when he failed completely, he was too big to fail, just like the big banks were too big to fail in 2007-2008.
So, for talking about haters I think is flawed, that is how politicians propagate a theme in the main, not all of them, but mostly. I think it is more that decent people should show their disgust of people in high office, and why.

I think people weaken the meaning of 'hate' when they use the word so often and attach it to everything so flippantly.


originally posted by: thesaneone
Hate is a weakness.

I think people weaken the meaning of 'hate' when they use the word so often and attach it to everything so flippantly.

Do you hate Milo? From what I have read on the interwebs he is supposedly a Nazi?

Humans are meant to be flawed.

originally posted by: Lysergic
I need this shirt

One of Palin's eyes is lower than the other.

This picture is both anatomically AND analogically correct. 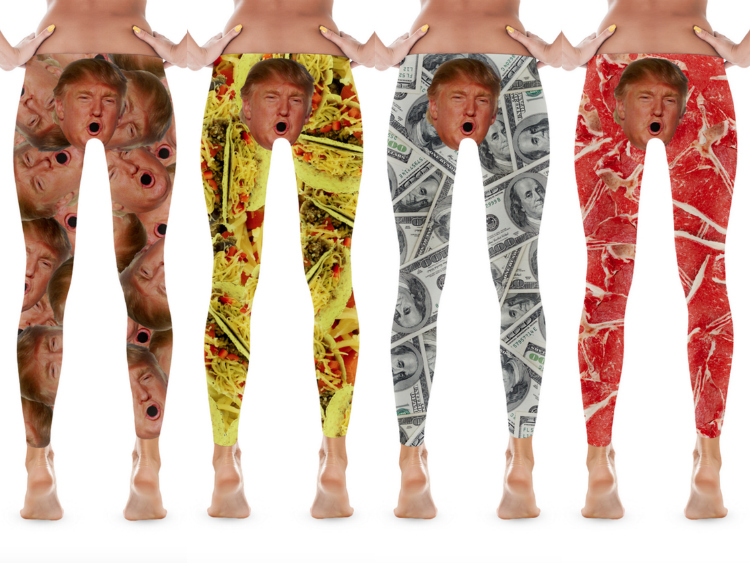 Have
A
Terrible
Evening

Realistically, Trump is a CEO, and he's used to having complete control of his businesses.

Yeah, being president doesn't work that way, so only time will tell how well he fits that new role.

But if he wasn't something of an autocrat, he wouldn't have been so successful at his previous roles in life. And after having had control of his businesses for decades ... you ought to expect the man to be a bit set in his ways and sure of himself.


If the Bitch of Benghazi had won the election

First time I have herd her referred to as such Give it time and even the left will come to embrace it and then the real healing of hate can start .

originally posted by: DBCowboy
a reply to: seeker1963

Complacency is the downfall of all civilizations.


originally posted by: DBCowboy
a reply to: seeker1963

Complacency is the downfall of all civilizations.

I don't think we do. If we did, we wouldn't have a thread about rainbow farting pink unicorn alpacas.


Hate is the prime reason for adrenaline . Its natural .

"Hate with every fiber of your being. Embrace the hate."

Interesting OP, you made me contemplate hate and question why..........

posted on Feb, 26 2017 @ 10:28 AM
link
NO. There are several stages of hate.
When your country is split in two it can still be like marriage when hate is just love in disguise. It used to work as a motor of progress in democracy.
When it becomes dark and destructive, the mind of the country becomes schizophrenic, self-destructive. Do not soak the mindset of Syria folks. Muslims played with the hate-energy and look how the fire consumes them. They have found themselves in a meat grinder. It has no end until they realize where is the root of their ignorance. 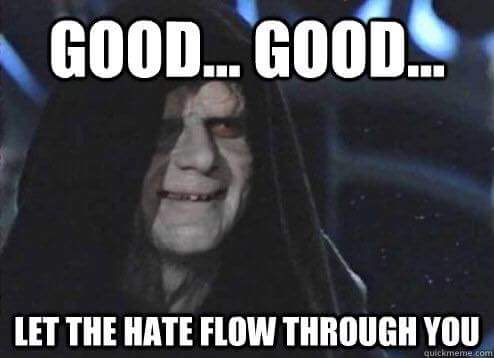 I use my fear
to empower my hate