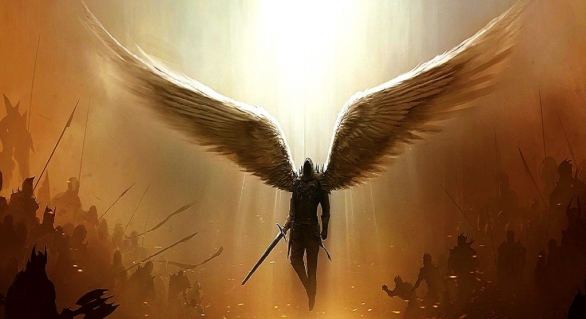 The old man heard the shadowy figure and his peculiar footsteps;" So your awake, how come? " he said with a smile and turned his head towards the shadowy figure. " Oh... " and the old mans smiled left his face. The shadowy figure, looked different, his appearance had changed, his skin was red and his eyes yellow, his crimson armor and him became one, only problem was, it feed on blood;" I feel black magic ", was the only words that came out of the shadowy figure.

" You been gone for a while, what have you done " The old man was curious in his reply, knowing that the 108 beads around the shadowy figures neck was the only thing that kept him from becoming a monster.
" I wanted to see, i wanted to.... know the difference between magic in this world, to see who can be judged with an instant. I came across an interesting tale of families keeping their children safe. They teach their young to safely row a boat across the river, where corpses of millions lay in its waters. Mother to daughter it usually is, its always been been like this, its natural. Their natural bond, will guide them even if they fall into the water, they can swim, where most drown....... Those should not be judged "

The shadowy figures wings started to grow, his senses, heightened and his sight began to glow. The old man looked at the metamorphic event folding in front of his eyes;" Dont Judge to quickly, or those beads will run out quickly "

The scream that followed, was not to be mistaken for anything other than ...
edit on 2017223 by tikbalang because: Image