Rand Paul: US is 'lucky John McCain's not in charge'

“Everything that he says about the president is colored by his own personal dispute he’s got running with President Trump, and it should be taken with a grain of salt, because John McCain’s the guy who’s advocated for war everywhere,” Paul said on “This Week.”

Paul added that if McCain were “in charge” the country would “be in perpetual war.”

“If you look at the map, there’s probably at least six different countries where John McCain has advocated for us having boots on the ground,”

Well well well, look what we have here.....McCain is being called out by whom some here at ATS consider to be the legacy of a hero, Senator Rand Paul.

McCain's further attempts to undermine Trump are starting to produce some vocal loyalty to the office of POTUS among Republicans. It's about time.

As far as McCain’s rhetoric saying Trump is trying to “shut down the press,” Paul cautioned against hyperbole.

“I don't agree with his analysis and applying that to the president,” he said. “I haven't seen any legislation coming forward that wants to limit the press. I see President Trump expressing his opinion, rather forceful in his own -- you know, his own distinct way.”

McCain is the definition of an establishment politician. I personally take the opposing position of him most of the time.
edit on 20-2-2017 by CriticalStinker because: (no reason given) 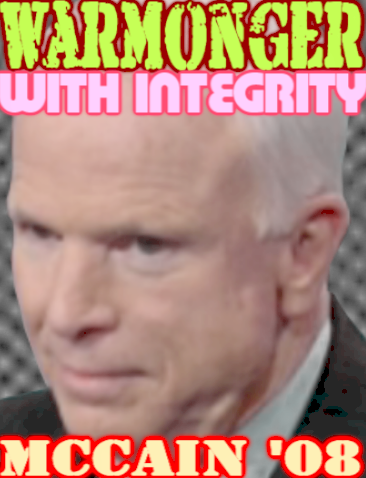 In my Neocon Wars film, I have this video clip in there of him off on a total rant, back in the 90's, where he was candidly going off the hook against any and all notions of "nation building". I tried finding the clip in recent months to paste into a thread. It was during the '08 run the clip went viral. I couldn't find it recently, but it might be in GooTube; if not it's in my piece (they ban).
edit on 20-2-2017 by IgnoranceIsntBlisss because: (no reason given)

McCain is a flyboy who was the son of a respected general, crashed a lot, sunk the USS Forrestal, and probably gave up secrets as a POW.

I don't understand how he keeps getting re-elected, and as a person that grew up in AZ, I no longer like it there because of his extended stay and Arpaio's. At least sheriff joe is gone and maybe facing some charges, but the whole government of Arizona is corrupt as fawk.

He is a Hillary.

Wookiep
+4 more
posted on Feb, 20 2017 @ 02:08 AM
link
Rand is right. McCain is a war-mongering establishment RINO. He always has been. The fact that Rand is calling out McCain and preferring Trump over that fool is TELLING.

McCain wants globalism, like the establishment has always wanted. It is that one thing, that has made both parties the SAME. Trump is NOT for globalism.

Pay attention Paul supporters! Rand, like his father is a smart cookie.
edit on 20-2-2017 by Wookiep because: (no reason given)

originally posted by: TinfoilTP
Rand Paul: US is 'lucky John McCain's not in charge'


John McCain: : US is 'lucky Rand Paul not in charge'.

Frankly, Paul is a lunatic, I've heard his beliefs.
Anything from his lips is already quite suspect, as far as I am concerned.


originally posted by: TinfoilTP
Rand Paul: US is 'lucky John McCain's not in charge'


John McCain: : US is 'lucky Rand Paul not in charge'.

Frankly, Paul is a lunatic, I've heard his beliefs.
Anything from his lips is already quite suspect, as far as I am concerned.

Ohanka
+8 more
posted on Feb, 20 2017 @ 02:26 AM
link
John McCain is the single most reprehensible, evil piece of pond scum that inhabits the swamp known as the US congress.

He'd be the worst person in American politics if Hillary Clinton wasn't a thing.

The man is evil. He advocates war with practically everyone, then will go home and cry about his war stories when campaigning for re-election, and use veterans to promote his own nonsensical brand of theocracy when he's proven time and again he has nothing but utmost contempt for them at the end of the day.

He's a vocal supporter of Fascists in Ukraine and Georgia, a big friend of the radical Islamist "moderate" opposition in Syria, and was a strong driving force behind practically every US war & intervention in the past 30 years.

originally posted by: IgnoranceIsntBlisss
I couldn't find it recently, but it might be in GooTube; if not it's in my piece (they ban).

Yes! I'm about to watch.

posted on Feb, 20 2017 @ 03:18 AM
link
I have a feeling Rand Paul is saying this now because there is a supposed audio recording of McCain getting tricked into thinking he is on a phone call with the Ukrainian prime minister (I think) but it's a couple Russian hackers trolling him.

Supposedly he undermines the administration during the call - if it's real

posted on Feb, 20 2017 @ 03:18 AM
link
I dont care for Trump, but this is absolutely true. McCain is one of the most dangerous men in America. And hes backed / controlled by some really nefarious characters.

Yes,Mc Cain is a paid off tool,plus the fact he is senile,reminds me of a song,Levon,wears his war wounds like a crown

Wasn't he reving a jet engine with the breaks on or something and it caught a missle on the plane behind him on fire? Atleast that's how I heard that story.

He did a wet start and caused this

you are just pulling crap out of your arse

At about 10:50 (local time) on 29 July, while preparing for the second strike of the day, an unguided 5.0 in (127.0 mm) Mk-32 "Zuni" rocket, one of four contained in an LAU-10 underwing rocket pod mounted on an F-4B Phantom II (believed to be aircraft No. 110 from VF-11[1]), accidentally fired due to an electrical power surge during the switch from external to internal power. The surge, and a missing rocket safety pin, which would have prevented the fail surge, as well as a decision to plug in the "pigtail" system early to increase the number of takeoffs from the carrier, allowed the rocket to launch.

The rocket flew across the flight deck, striking a wing-mounted external fuel tank on an A-4E Skyhawk awaiting launch,[1] aircraft No. 405 from VA-46, piloted by Lieutenant Commander Fred D. White.[2][13] The Zuni rocket's warhead safety mechanism prevented it from detonating, but the impact tore the tank off the wing and ignited the resulting spray of escaping JP-5 fuel, causing an instantaneous conflagration. Within seconds, other external fuel tanks on White's aircraft overheated and ruptured, releasing more jet fuel to feed the flames, which began spreading along the flight deck.

The impact of the rocket had also dislodged two of the 1000-lb AN-M65 bombs, which fell to the deck, and lay in the pool of burning fuel between White's aircraft and that of Lieutenant Commander John McCain. Damage Control Team No. 8 swung into action immediately, and Chief Gerald Farrier, recognizing the risk, and without the benefit of protective clothing, immediately smothered the bombs with a PKP fire extinguisher in an effort to knock down the fuel fire long enough to allow the pilots to escape. The pilots, still strapped into their aircraft, were immediately aware that a disaster was unfolding, but only some were able to escape in time. McCain, pilot of A-4 Skyhawk side No. 416, next to White's, was among the first to notice the flames, and escaped by scrambling down the nose of his A-4 and jumping off the refueling probe shortly before the explosions began.

there - stop making crap up

if your gonna talk sh@@ about someone you should at least your facts straight, his father and grand father were both 4 star admirals. and mccain didn't start the fire. that has been proven time and time again.

now is mccain a d---head yes he is, but all that crap about starting the fire and giving up secrets is nothing but rumor and innuendo.
edit on 20-2-2017 by hounddoghowlie because: (no reason given)


McCain was a prisoner of war for 5 1/2 yrs, in 1968 refused early release when the commies found out who his dad was,commander of all U.S. forces in vietnam.they also tried to beat him into submission.
he did make a anti-American propaganda confession, just like many others, that was to be expected. but when he wouldn't make any more they beat and tortured him more.
edit on 20-2-2017 by hounddoghowlie because: (no reason given)