A story about Gypsies

A week ago, there was a thread about gypsies, well, not really a thread it was more about accusing gypsies as a whole group. It started reasonable and civilized, but when i disagreed about, well, mostly everything, and the accusing of the whole community and instead said;" A few rotten apples doesnt mean the whole harvest is spoiled " I was told by one prominent member, which name i wont disclose, but most people who have been in here for a while, knows the few i have a hard time finding a common ground with.

One person wondered why they should even be allowed to breed, and even I, who most of the times have something to say, just looked surprised about the true colors coming out.
The other made accusations which had no real source unless it was the Daily Mail, a tabloid to source it to.

Instead of learning about the true nature of things, the thread became mostly filled with stereotypes based on Guy Ritchie movies, but one thing i realized for those few who disagreed, was that when a Gypsy told them otherwise, they couldnt stand it.

The Romani, the largest European minority group with approximately 11 million people, constitute a mosaic of languages, religions, and lifestyles while sharing a distinct social heritage. Linguistic and genetic studies have located the Romani origins in the Indian subcontinent. However, a genome-wide perspective on Romani origins and population substructure, as well as a detailed reconstruction of their demographic history, has yet to be provided. Our analyses based on genome-wide data from 13 Romani groups collected across Europe suggest that the Romani diaspora constitutes a single initial founder population that originated in north/northwestern India ∼1.5 thousand years ago (kya). Our results further indicate that after a rapid migration with moderate gene flow from the Near or Middle East, the European spread of the Romani people was via the Balkans starting ∼0.9 kya. The strong population substructure and high levels of homozygosity we found in the European Romani are in line with genetic isolation as well as differential gene flow in time and space with non-Romani Europeans. Overall, our genome-wide study sheds new light on the origins and demographic history of European Romani. 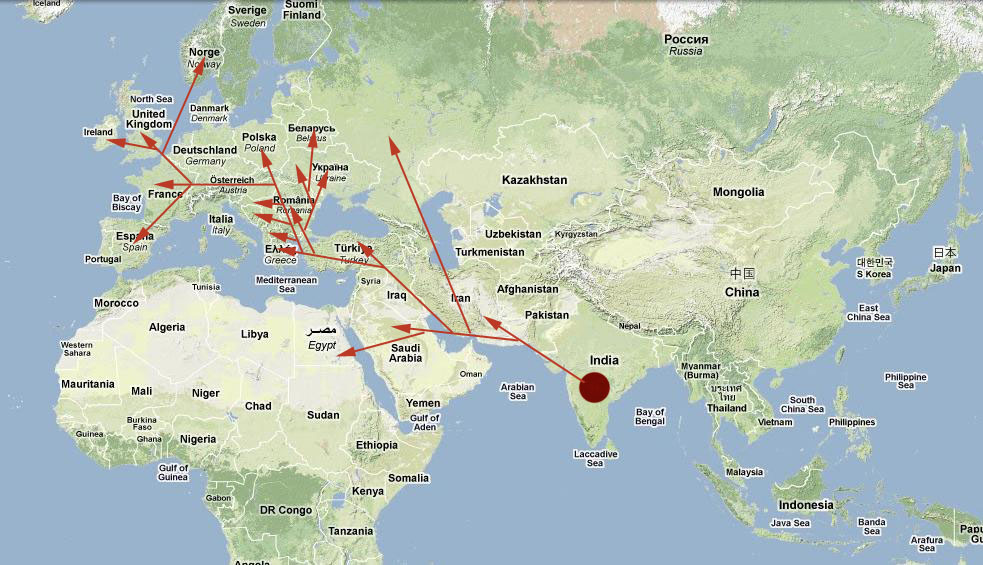 The Kale (also Kalá, Valshanange) are a group of Romani people in Wales. Many claim to be descendants of Abram Wood, who was the first Romani to reside permanently and exclusively in Wales in the early 18th century, though Romanies have appeared in Wales since the 15th century.Generally speaking, the Kale have employed a tribal structure in which a group of several family units would be under the authority of a male chieftain. However some Kale families are matriarchal with a senior woman being chosen by consensus among the other women of the family to take the leadership role

The Sinti (also Sinta or Sinte; masc. sing. Sinto; fem. sing. Sintesa) are a Romani people of Central Europe. They were traditionally itinerant, but today only a small percentage of the group remains unsettled. In earlier times, they frequently lived on the outskirts of communities. The Sinti of Central Europe are closely related to the group known as Manouche in France. They speak the Sinti-Manouche variety of Romani, which exhibits strong German influence.

The Romani (also spelled Romany; /ˈroʊməni/, /ˈrɒ-/), or Roma, are a traditionally nomadic ethnic group, living mostly in Europe and the Americas and originating from the northern regions of the Indian subcontinent, presumably from where the states Rajasthan, Haryana, and Punjab exist today. The Romani are widely known among English-speaking people by the exonym "Gypsies" (or "Gipsies"), which some people consider pejorative due to its connotations of illegality and irregularity.

In February 2016, during the International Roma Conference, the Indian Minister of External Affairs stated that the people of the Roma community were children of India. The conference ended with a recommendation to the Government of India to recognize the Roma community spread across 30 countries as a part of the Indian diaspora.

Some Romani people are Christian, others Muslim, some retained their ancient faith of Hinduism from their original homeland of India, others have their own religion and political organization

Saint Sarah, also known as Sara-la-Kali ("Sara the Black", Romani: Sara e Kali), is the patron saint of the Romani people. The center of her veneration is Saintes-Maries-de-la-Mer, a place of pilgrimage for Roma in the Camargue, in southern France. Legend identifies her as the servant of one of the Three Marys, with whom she is supposed to have arrived in the Camargue

Mother Goddess figurines have been found in the excavations of the Indus Valley Civilisation in Mohenjo Daro and Harappa ( The Indus Valley Civilisation (IVC) was a Bronze Age civilisation (3300–1300 BCE; mature period 2600–1600 BCE) [.. Link source ...] , in the Sindh – Punjab – Haryana area Some Romani claim Punjab is their original habitat], and Mata Kali [Mother Kali] is still worshipped in India. Therefore, Saint Sarah is now increasingly being considered as "a Romani Goddess, the Protectress of the Roma" and an "indisputable link with Mother India"

Parallels between the ceremonies worship of Saint Sarah and the Hindu goddess Kali, identifies the two as one and the same.

Being a gypsy, does not make me into anything unique, i am however raised to to take on any unjust fight. I wont lie just to make someone feel comfortable with their mask on. The prejudice is something a gypsy lives with, and its something fought everyday.

When i started researching my background and backstory i opened doors i never thought existed, i ventured into a realm where science was clouded with a pictographic language, i learned that also. And then i saw everything, the myst disappeared and that gut feeling i had, was now not just theories but real.

But when you hear;" Why are you even allowed to breed " You sit and wonder why a gypsy always fights.
edit on 2017219 by tikbalang because: image

One group came from North India, and the other group came from Egypt to Scotland, brought there by the Templars to help with metal working needed for battle weapons. The term "gypsy" referred to a person thought to come from Egypt, although most came from India and not Egypt. I guess people couldn't tell the difference, so everybody got the name gypsy. Funny enough, the "gypsies" from India are the ones that wandered about, which is what we really think about gypsies. While those from Egypt, that should really be called gypsies, stayed put in Scotland, and didn't "roam" the land like the Roma.

I wanted to address the accusations of being a lying gypsy, and the Kale part, its easier to have assumptions based on prejudice against a culture that stayed pretty much the same throughout paradigms..

Even though i am outspoken there is a Mystery door, that i believe only one who knows the culture can walk through..
Your Blood is the key not the knowledge.. I know lots of parables

In all seriousness, the attitude towards the Roma and other members of the group that are pejoratively called "gypsy", is very similar to that which the Jews have put up with over the centuries.

Good info, hopefully some ppl look at it before they lay down judgements on whole communities or even individuals!
I been researching the Romanies travel through Europe and i found some interesting theories and legends, like the one with Rajput king Phritviraj Chauhan whom were defenders of northen Indian borders and around 1000ad they finally lost due to backstabbing governments around and Muslim invader Muhammed Ghori broke through Chauhans army and result of it that army split up in three parts and one part travelled through Afghanistan to Europe and they were called Romanes Chave aka sons of the God Rama.

I noticed that the other thread had seemingly disappeared as it was indeed becoming ever less civil, I never read the full list of the other comment's but have to say that I am disgusted at that particular comment.

As you know I draw a line between true Gypsy's of the Romany origin and modern new age travelers (Whom are responsible for most of the problem's as in fact British Roma do tend to have a few bob (be fairly well off) and I only reported from my own experience, I also pointed out that as well as Jewish ancestry on my mothers-mothers side there was also a link to Russian Gypsy though it may or may not have been in law's.

But historically as you know the Jewish community were also denied the right to settle and forced to move on from place to place, pogrom and forgotten holocaust followed them were ever they went and one travelling community met another when the Gypsy's whom got there name from being mistake for Egyptian's entered western europe from the east, Not sure about Amptah's history but it sound's fascinating as well and if they were Coptic Christian's there is no reason that Templar knight's would not have brought them if they had worked for them, indeed if that is the case then a stronger link should be found to back up that story in Portugal than even in Scotland since Portugal was very much a Templar country with it's king even being a Templar himself (with the only recorded Templar dispensation to take a wife and have children as it was usually forbidden for the Templar's to do so as they were a monastic community of warrior monk's - Divided between the Noble's whom were of course Templar Knight's and the peasant's whom were the Templar Soldiers - they had full autonomy from the control of Rome, also a rare thing).

So these two community's traveled together, Jew and Roma and even intermarried though there culture's were of course kept separate, today however many Roma are probably of Jewish extraction and many Jewish are probably of Roman extraction.

Of course this shared persecution reached it's worse moment during the NAZI reign of terror, many regard the hundreds of thousand's (if not more) of Roman also gassed and murdered by the NAZI's as a forgotten holocaust overshadowed as it is by the number of Jew's also murdered.

Here is some more reading on this crime against humanity.
www.jewishvirtuallibrary.org...
history1900s.about.com...

I am sorry that the previous thread deteriorated as far as it did.