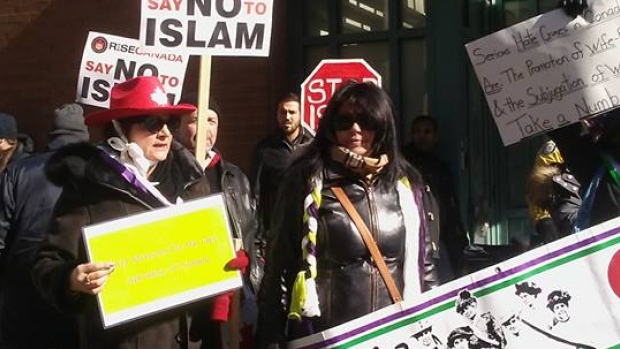 Police are investigating whether an anti-Islam rally held on the doorstep of a mosque in the heart of downtown Toronto Friday had any criminal element and whether it could be considered a hate crime.

With signs of love and support plastered to its exterior, Masjid Toronto bore little sign on Saturday of the rally held there just a day before, during which more than a dozen people — with banners and loudspeakers in hand — called for a ban on Islam as Muslims prayed inside.

Douglas-Cook said it's too early to determine whether the incident will be considered a hate crime but that investigators are looking into the possibility...

So if RCMP are determining whether this is a hate crime or not, then wouldn't #BLM fall into the same category, religion aside? It would be like saying ME lives matter.

There is something calling for a peaceful protest, and in this case it wasn't violent. But some civil unrest is going on and whatever the issue going on in the US has Canadians starting to feel the movement.

I live in toronto, and I feel everyone is entitled to their opinions, but I don't condone this. I can see where the unrest is coming from because Toronto is the most diverse city in the world and racism is really scarce here so it's not surprising people are shocked and upset.

It's a touchy subject and I'll just leave it at that.

posted on Feb, 19 2017 @ 01:50 PM
link
And yet Muslims and Blacks are entitled,it seems, to protest against Whites? Call for Death to Whitey? Call for the death of anyone who speaks against the Quran? Again this is not equality, if one group can do it, then so can all groups. This is what is causing a lot of the resentment, when others are treated as "special".

posted on Feb, 19 2017 @ 01:54 PM
link
I read up on the story on the cbc, not too sure if this was really a racist event, but thats why we have freedom of speech, also why we have laws againts hate speech.

But some civil unrest is going on and whatever the issue going on in the US has Canadians starting to feel the movement.

I joke with my buddies when we see a murder in the paper about which ethnic group it is and I am usually right...it is not a Tom or a Dave or a Jenny....its more and more a name I can't pronounce and is obvious they are immigrants.
After the write up in the paper,it usually goes on at some point "so and so arrived in Canada at"

People are too PC to say it...but most I talk to want the Trump treatment.
Screen them so we don't have to put up with their BS.
Make sure there are no terrorist ties.
Make sure they are educated and have something to offer.
DON'T just let ANYONE in!!!

No more "honor killings" or female genital mutilation....we should NEVER let these types in.

PC crowd...bash all you want.

I am kinda live and let, but and it's a big but, on the condition they assimilate and don't force their religion or political views on us. I lived through the later end of the ANC insurgency in South Africa where they tried to force their Marxist political views on us using terrorism, we just killed the terrorists. A simple solution to a serious problem. Hopefully none of this becomes stupid or violent, I am too old to do my previous work.

The RCMP are a bit of a joke however, along with CSIS and our government. They will investigate BS for the sake of the PC crowd, but they won't investigate hundreds of millions in tax and public funds frauds, in order to protect politicians and universities or passenger planes being blown out of the sky by IMF or UN operatives. They write their own laws and the break them at their convenience. C'est la vie, plus ça change, plus c'est la même chose.

posted on Feb, 19 2017 @ 01:58 PM
link
As along as there was no violence,it should not be a hate crime.Otherwise the Wetboro Baptist Church would be out of business with all their hateful crap they spew.

posted on Feb, 19 2017 @ 02:07 PM
link
If them protesting Islam amounts to a hate crime, then what these SJW's have been doing so far amounts to genocide.

Toronto does not equal the USA.

Canada is, simply put, no longer a free nation. Speaking out in peaceful protest is not any sort of crime, much less a "hate crime" If Canadians want freedom, they'd better start fighting for it.

Protesters are known as provocateurs now.
Remember the G7??

originally posted by: dukeofjive696969
I read up on the story on the cbc, not too sure if this was really a racist event, but thats why we have freedom of speech, also why we have laws againts hate speech.

Free speech and hate speech laws cannot coexist. You have one or the other.

Protesters are known as provocateurs now.
Remember the G7??


Not offhand? Should, but been tired all day, so not recalling at the moment!

Some really are provocateurs. Some actually protest lawfully. Seems a lot these days are the former sort, though, doesn't it?

posted on Mar, 2 2017 @ 08:30 PM
link
This is likely a response to motion M103 in Canadian Government
Which had to do with anti-islam speech.
Some say it is an attack on free speech some say banning certain speech is good.
I dont know what ended up on happening with M103.

Here is a vid having to do with it.