These cards are totally accurate!


Clearly it could be looked at as a play on the situation. We know many organisation of the US want to bring assange down, many understand he could be assassinated and thus killed. If they kill him, they may also wish to go after the organisation itself, Wikileaks. So not just to kill its leader but the actual system itself. "and Stay Dead". The coffin behind him, is him.

However, I think you are not here to try and resolve this intrigue. Sadly.
edit on 19-2-2017 by BlackProject because: (no reason given)

That's because there is no intrigue.

originally posted by: Mandy555
The cards are a homage to the book.


"at the time events" were not, at that time events at all. Most of the events that are depicted in those cards happened 10 years on wards. To depict precise art work and reference to the actual events in such a way is far beyond coincidence.

I guess the reason this being just another story to pass people's time allows us all to miss the detail in which is being presented here.

I am not one to jump on topics like this usually but this certainly leaves me thinking something does not quite add up, at all.
edit on 19-2-2017 by BlackProject because: (no reason given)

I originally read the Illuminatus trilogy back in 96 it was my gate way drug to conspiracies.

It's a very trippy book.

It was the year when they finally immanentized the Eschaton. On April 1, the world's great powers came closer to nuclear war than ever before, all because of an obscure island named Fernando Poo. By the time international affairs returned to their normal cold-war level, some wits were calling it the most tasteless April Fool's joke in history. I happen to know all the details about what happened, but I have no idea how to recount them in a manner that will make sense to most readers. For instance, I am not even sure who' I am, and my embarrassment on that matter makes me wonder if you will believe anything I reveal. Worse yet, I am at the moment very conscious of a squirrel-in Central Park, just off Sixty-eighth Street, in New York City-that is leaping from one tree to another, and I think that happens on the night of April 23 (or is it the morning of April 24?), but fitting the squirrel together with Fernando Poo is, for the present, beyond my powers.

posted on Feb, 19 2017 @ 12:42 PM
link
Heck some of the Expansion games Include church of the Subgenius Cards which
is an interesting rabbit hole to go down. 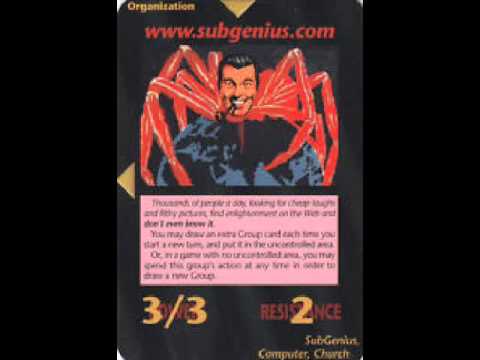 posted on Dec, 21 2019 @ 08:56 AM
link
Hi, I have just joined this site here for the purpose of replying to this article. It's a good article and a good discussion. Maybe as the world is turning ever more weird (Clown World) this could be a decent site to stay grounded. We'll see.

On the subject: good summary in the original article.

First I would like to see if anybody who is in actual possession of the physical game can verify the actual date. I mean, the mystique around this game could be posthumously created. Before we even consider whether the "predictions" are co-incidences or more, let's first verify that they are pre-dictions and not created after the fact. I never saw this game physically, I only read about it. And I only read about it in recent years. So can we have somebody testifying and sharing convincing new pictures (i.e. pictures that aren't just copies of those we have long seen) of an actual copy of that game back in 1983? At least a beat up box with some price tag or other imprint that dates it to the pre-1990s? If I go on Amazon now and buy this, I likely get a post 2010 version, when none of those cards are predictions. And if you show pictures from the 1980s, you ought to show those cards in question, to make sure they weren't swapped out.

Now that said, here is my interpretation of the "Trump card" which have become even more true since the inauguration day. Did you notice Melania Trump's dress on inauguration day? It reminded everyone of Jackie Kennedy on Dallas open car ride. There are differences, but the allusion was obvious. You could say: oh, that is just because Trump is going to be a historic president as JFK was. A legendary president. Well? Is that sufficient? I don't think so. In reality Melania, who certainly did not choose this dress all by herself, was put beside Donald with a message: "our snipers can take you down any time, now have a nice presidency."

Has there been any president who had been threatened from his first months in office that the "intelligence community" has "6 ways from Sunday" to go after you (Chuck Schumer) and you should try not to upset them? What president has ever upset the intelligence machinery, or every vowed to fight the corrupt creatures that have infested the government apparatus? Well, JFK has a little, but not to the extent Trump has? And how much of that corruption has ever seen the light of day before now? When has there ever been a vice president assigned to "anti-corruption" work, like Joe Biden, in one country, like Ukraine, whose son, like Hunter Biden, receives payments form a corrupting company, like Burisma, in the amount of like US$ 166,666.66 per month, and it is a matter of original documents on the public record, frank open bragging statement by said vice president, that he got the prosecutor Shokin fired by threat of withholding aid in the amount of 1 billion US$. All of it in the open and in the clear, and NOBODY in the mainstream media taking that up? And Wikipedia declaring it "debunked conspiracy theory". Never before in the history of America has any of this happened, and yet, Donald Trump has not been sniped dead yet? Is it a matter of time? Or what?

I think what this card is telling us is that there might be no way for us out of Clown World. That they no longer just flash fleeting allusions and signs in front of our eyes and then call us "conspiracy nuts" when we pick up on them, but now they have the audacity to show us plain facts on silver platters, like holding 4 fingers in front of our eyes and demanding under threat of psychiatric internment that you claim that there is nothing there, 5 fingers, and you must not only say it, but you must really believe it.