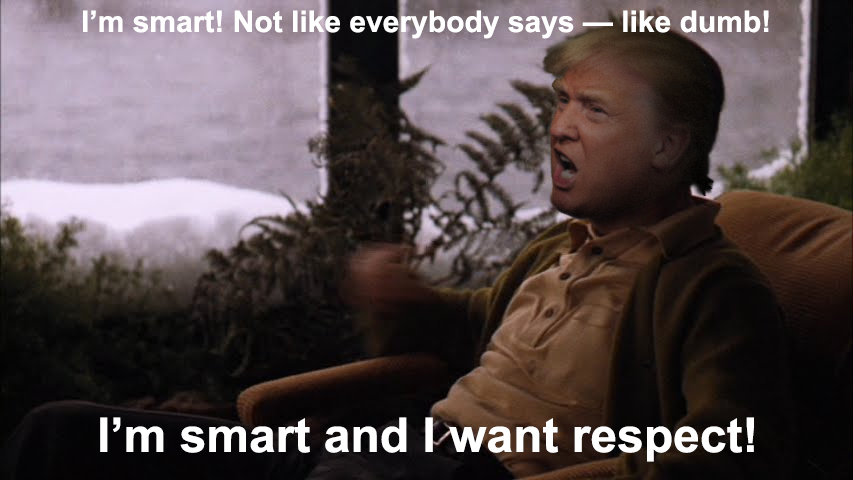 Delivering another formulaic drivel fest, Dear Leader meandered through his familiar litany at today's first 2020 campaign rally in Melbourne, Florida. It wasn't just the rhetoric that was recycled, once again Trumpster Fire was flanked by a row of the same cult members from earlier Florida rallies. 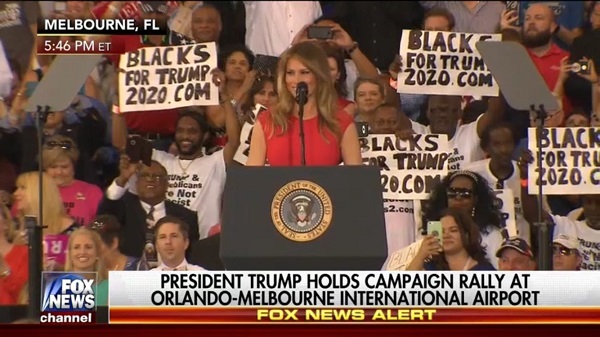 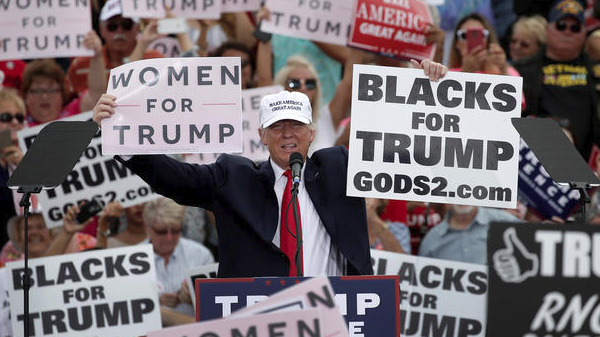 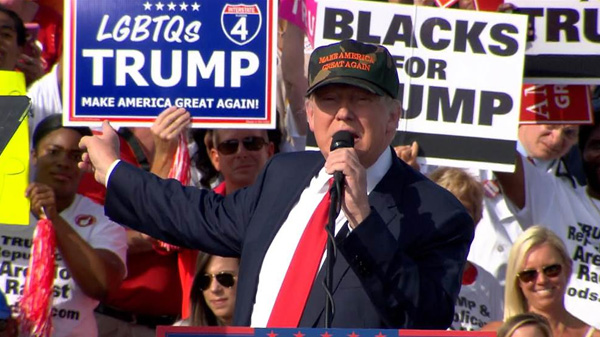 It's clearly not a coincidence that the exact same cult members keep showing up directly behind Donald Trump in these Florida rallies — they're being placed there to give the impression that Donald Trump enjoys strong support among black voters. While it's pretty sad that the failing so-called President, one of the most prolific liars in all of history (it's true, believe me), is using people as props (sad!), the truly special part about it is that they're members of a bats# religious cult:

He's also a former member of the murderous Yahweh ben Yahweh cult, which was led by the charismatic preacher Hulon Mitchell Jr., who was charged by the feds in 1990 with conspiracy in killings that included a gruesome beheading in the Everglades.

Michael, along with 15 other Yahweh followers, was charged for allegedly conspiring in two murders; his brother, who was also in the cult, told jurors that Michael had helped beat one man who was later killed and stuck a sharpened stick into another man's eyeball. But jurors found Michael (and six other Yahweh followers) innocent. They sent Mitchell away for 20 years in the federal pen.

In the years that followed, he changed his last name to Symonette, made a career as a musician, started a radio station in Miami and then re-invented himself as Michael the Black Man, an anti-gay, anti-liberal preacher with a golden instinct for getting on TV at GOP events. He's planned events with Rick Santorum and gotten cable news play for bashing Obama.

Since 1997, he's been charged with grand theft auto, carrying a weapon onto an airplane and threatening a police officer, but never convicted in any of those cases.

Take a look at the website the dishonest Trump team is promoting. Pressing "enter" on the blacksfortrump2020.com site opens up honestfact.com, a site featuring such revealing passages as these only-slightly-less-comprehensible-than-Trump gems:

Don't forget Blacks For Trump Blacks we fought for you, we are not responsible for you winning the Election all we are are the helpless that made our good White Republican brothers happy & comfortable because Black & White in unity is the Whole body of Christ 1Cor. 12:12-13 & as Christ we are the Comforters in unity we make each other comfortable about making America great.

3.TRUMP PROTESTERS ARE SONS OF PERDITION (ISHMAEL) THE LOSER WHO MUST BE REVEALED FOR BLACK & WHITE TO UNITE 2Thess. 2:1-11! THE PROTESTERS ARE PHONEY Black people & are really east Indians acting black

That's the type of nut that our President, having a tremendous weakness of character and need for constant affirmation, has used as props. 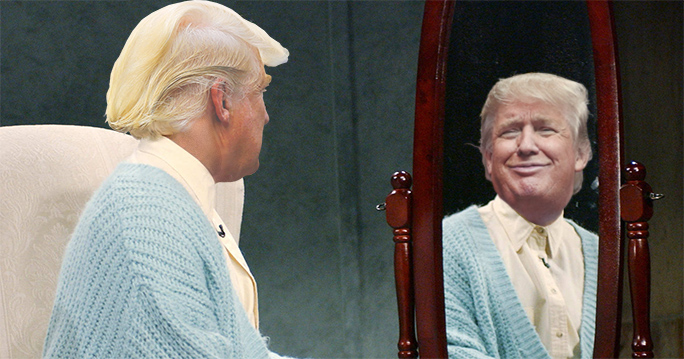 It's beyond the scope of a single post OP but for those of you, who despite seeing multiple appearances directly behind the podium by the same group, need more evidence suggesting coordination between Team Drumpf and the Yahweh Ben Nuts, read here and then view here and here. 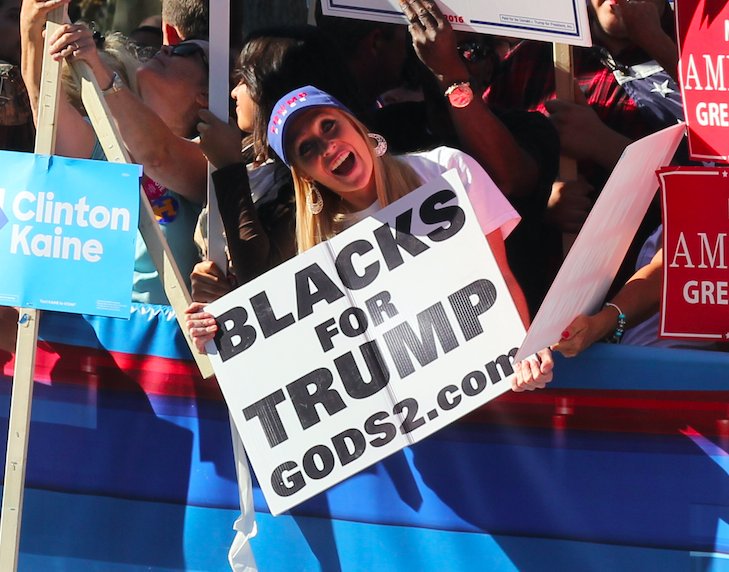 originally posted by: theantediluvian
hat's the type of nut that our President, having a tremendous weakness of character and need for constant affirmation, has used as props.

It's ironic that you used that picture because I think there's a good chance Al Franken will be the next POTUS. 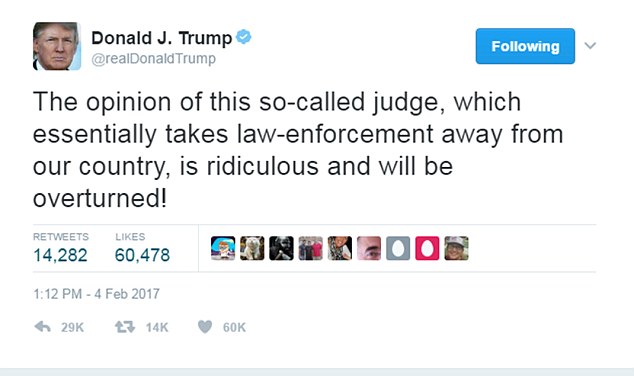 I hope you're not going to try to hold a random guy on the Internet to a higher standard than the so-called President!

If I was ever curious about people behind Trump is these two: 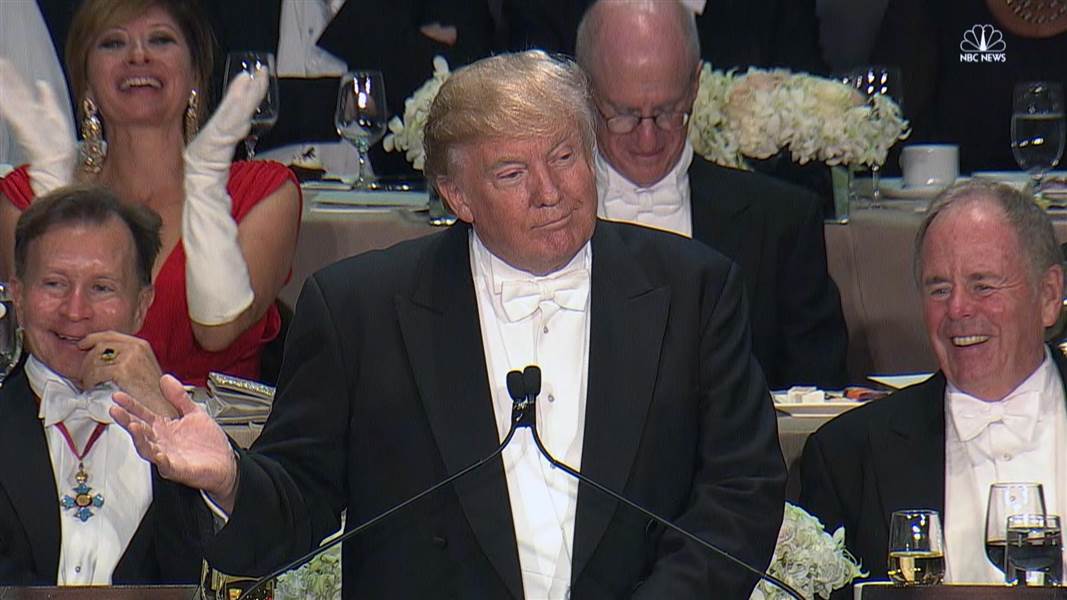 They seem very powerful and seem to be enjoying his rhetoric emmensly.

I need to cite a source to be snarky? Well it's a rally and this:

(I used ZH because I figured that's your kinda pro-Putin propaganda outlet ;P)

posted on Feb, 18 2017 @ 08:49 PM
link
This is a public rally. It serves two purpose. One is fund raising. Second is keeping in touch with the people so he don't forget about them like past president have done.

posted on Feb, 18 2017 @ 08:53 PM
link
Why not go the whole hog and erase his reflection from the mirror in your picture,other than that get over it,your getting to be a one trick pony when your capable of better.
edit on 18-2-2017 by khnum because: (no reason given)

To the left is John J. Studzinski

John Joseph Paul Studzinski, CBE (born March 19, 1956)[1] is an American-born British investment banker and philanthropist.[2] He is Vice Chairman of Investor Relations and Business Development at The Blackstone Group.[3] He is also a Senior Managing Director of Blackstone.[4] He joined Blackstone in 2006 as global head of Blackstone Advisory Partners, the company's mergers and acquisitions advisory arm, and he ran that division for nearly a decade.[4] Prior to joining Blackstone, Studzinski was at Morgan Stanley from 1980–2003, and at HSBC from 2003–2006, building mergers-and-acquisitions divisions in both of those institutions. Studzinski is heavily involved in hands-on philanthropy, patronage, and charity work. His numerous charitable activities revolve mainly around the arts, the homeless, and human rights. His own charity, the Genesis Foundation, supports and nurtures people in the creative fields in the early stages of their careers. Born and raised in the U.S., Studzinski moved to the UK in 1984, and holds American and British citizenship.[5] Since 2006, he has divided his time between London and New York.[2]

The medal appears to be: Most Excellent Order of the British Empire

The other man it seems is James P. MacGilvray, Executive VP, UBS Financial Services and member of the Board of Directors of the Alfred P. Smith Memorial Foundation.
edit on 2017-2-18 by theantediluvian because: (no reason given)

I need to cite a source to be snarky? Well it's a rally and this:

(I used ZH because I figured that's your kinda pro-Putin propaganda outlet ;P)

I don't like ZeroHedge very much but i'll take it this time.

Though I don't think it really confirms that this was a campaign rally. President Trump's hostility to the Established Media is pretty clear for all to see, he seems to prefer to address the people directly. That's what I viewed this event as.


Jesus, give it a rest already

Can you link at least one post where you're not crying?

Try spreading some inspiration for once.

Let me guess...they all look the same to you.

How dare these black people stray from the Dems plantation and fall outside the narrow stereotypes of black Americans by the regressive left!

Keep up the good work !!