Will there be any new serious religions?

It doesn't have to go as far as trans humanism.

I'm talking about an A.I. that teaches a way back to the esoteric.

I did mention those other tools as connection to it. But maintaining and feeding that connection wasn't ultimately my point.

The A.I, teaching spiritual freedom and enlightenment was where I was going with it.

posted on Feb, 14 2017 @ 01:54 PM
link
a reply to: IgnoranceIsntBlisss
Yes, I've always seen "political beliefs" as a form of religion. Toynbee talks about the "corporate self-worship" of human groups. But I think environmentalism would have a better chance of becoming truly world-wide. A political religion is half the world, at most, against the other half.

I know, I tried finding some good Youtube clips of the plot ("Go God Go!"), but none came up.

Very well. That as a standalone could go that very route. No doubt. it's just that it's all coming at us at once:
The Technological Singularity

In the meantime, dig this:
The Church of Google


We at the Church of Google believe the search engine Google is the closest humankind has ever come to directly experiencing an actual God (as typically defined). We believe there is much more evidence in favour of Google's divinity than there is for the divinity of other more traditional gods.

We have compiled a list of nine proofs which definitively prove Google is the closest thing to a "god" human beings have ever directly experienced.

I'd say that the Matrix/Simulation theory is the new religion. It is a safe, blanket belief that seems to draw in those who think the existing explanations are "fairy tales". I have one question for the simulation folk: Who created the simulation?

You're not wrong. Transhumanism would easily win out in a contest of influence between the two. It appears with those funding the research, and the funds to buy technological immortality, this ideology already has won out.

Maybe what I'm talking about they'll peddle to the masses to keep them complacent.

originally posted by: IgnoranceIsntBlisss
a reply to: the owlbear

I know, I tried finding some good Youtube clips of the plot ("Go God Go!"), but none came up.


Yeah, they're not available in the US on YouTube. I figured you knew about it from your post. People are always going to find something to argue about and war over.

No religion could possibly get off the ground with science explaining everything that happens.


There was a time I might have agreed but after learning about the Aum Shinrikyo cult I realized that even intelligent people like scientist can be pulled into bizarre belief systems.

Aum Shinrikyo had many members who were scientist and believers in the cults Ideology. Their knowledge helped them engineer biological weapons and sarin gas.
They were a billion dollar cult that puts Cobra Commander to Shame.


This fist video is a good run down of the cult

Here is some of their really weird Anime Recruitment

Oh, I've seen the entire South Park canon (which also includes the "movies" from their games).


That's a funny episode, them ripping on agnosticism, when they're agnositics:


The big joke that whole Staunch Agnostic drill sargeant character, in my view is that True Agnosis can't be staunch.

I dont drink much soda pop, but I do love Dr. Pepper!

It's been my neuroscience+agnosticism based thing I've been living by since 2006, based on neuroscience (the FMRI political bias brain scan study), crafted to be the best possible solution to mass social group obsessionisms, ultimately a unique hybrid of 'religious' agnosticism applied with my counter-mass social group adherence theory.

I never really posted about it online all these years, but last year when I finally noticed all the crazy Identity Politics driving everyone mad, I finally drank a bunch of beers and wrote that up.

posted on Feb, 14 2017 @ 02:22 PM
link
As someone who was raised a Catholic and still identifies as a Catholic today I can honestly say I hope not.

i really really hope not.
last thing we need is another religion

originally posted by: WUNK22
I sure do wish God would intervene. Man I have a whole lot of questions for him!! Maybe he could just rid us of anyone who kills in his name, that would be a great start!!

Why do you want God to intervene? As for killing...

And fear not them which kill the body, but are not able to kill the soul: but rather fear him which is able to destroy both soul and body in hell. -- KJV, Matthew10:28

God is not a lover of the flesh.

It doesn't have to go as far as trans humanism.

I'm talking about an A.I. that teaches a way back to the esoteric.

I did mention those other tools as connection to it. But maintaining and feeding that connection wasn't ultimately my point.

The A.I, teaching spiritual freedom and enlightenment was where I was going with it.


Now that I've thought more to your words, there used to be this crazy site that was a an occult esoteric religion thing based on emerging tech stuff. I used to talk about it back in the 2004-2006 era. I mentioned it in my "TWYS" piece. I also alluded to it here:
Finishing the Unfinished Pyramid
I tried finding the site just now, there were numerous very specific phrases in the site. The ones I've remembered so far aren't bringing it it. "neu-genesis" "Genesis II" "Eden II" "Neu-Tower of Babel"
The site layout was pretty cool actually. Really artisitic. Like being in another dimension. Seriously creepy. Dark page theme. Ahead of its time for sure. Not a lot of stuff relating to mind sciences, AI, and such tech in the light of occult religion stuff came up in the Google God in those days. I deliberately looked all the time, and that was basically it (outside of the New Agers and their more generalized "transformation of consciousness" type talk). The main site interface was the "_____ Cube". I'm trying to remember, exactly what it was called. It also talked about "The Washington Stargate" "opening", which isn't coming up in the Google God so the site might by lost to history. You can see some of their art images in that end segment on my TWYS, which might just be the last places they exist online.
The Washington DC Stargate: 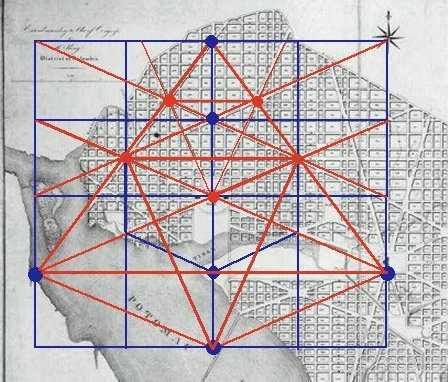 I used to have a lot of writings about these kinds of topics in my old original myspace blog, but post-2006 I realized how important my AGI Manhattan Project work was, as its REAL, and that religious/prophecy mumbo jumbo gave no credence to my real work, and by then I had gone "Socio Agnostic", so in my new blog site I never reposted any of that old stuff over from myspace. Myspace nuked itself eventually, and in 2010 youtube & photobucket nuked my media accounts so even the obscure spots that kind of work still existed it ended up the media was all neutered.
edit on 14-2-2017 by IgnoranceIsntBlisss because: (no reason given)

Against any organized religion... and after 1-8th grade in Catholic school (still can't go to the zoo's penguin house as they look JUST LIKE the Dominican nuns do)... it took me a long while to learn about other faiths.

I believe a little bit of all of them is closest to the truth. Once the world embraces unity of ALL faiths and creeds... we will finally be closer to the truth... and if one does not believe? That would be OK too.

Hasn't anyone around here been touched by his noodley appendage?

posted on Feb, 14 2017 @ 03:49 PM
link
There are too many things to take place of religion in modern times for a specific one to emerge, in my opinion. Such as your choice of sport, TV show, movie franchise, politics, science, video game, and so on. Religion filled the void in people's lives after all other basic needs were satisfied. In modern times we don't sit around a fire and discuss why certain things happen, we just Google it on our phone by the fire and continue the conversation.

Perhaps the Internet is the new religion...

Second off. I dunno. I think all of that other media lacks the ability to really, lastingly fill the void the way a religion can. I think that now more than ever people are thirsty for a combined set of values and stories to share and live by. Maybe that's just people that I know, but I know a lot of spiritually thirsty people.

originally posted by: lordcomac
with science explaining everything that happens. .

Lol. I have no words.