posted on Feb, 14 2017 @ 12:01 PM
link
Ken Johnston, 74, who did have a minor honorable role in the Apollo program, is in India being honored by an aerospace academy in Chennai. He has long posed as an 'astronaut consultant pilot' [he actually flunked out of flight school] and an astronaut selectee dropped at the last minute by changes in requirements [he never met the minimum standards to apply], but actually appearing in public as a real astronaut is a new level of make-believe. Those poor academics in India paid for his trip there, based on his claimed status. This can only end in tears. 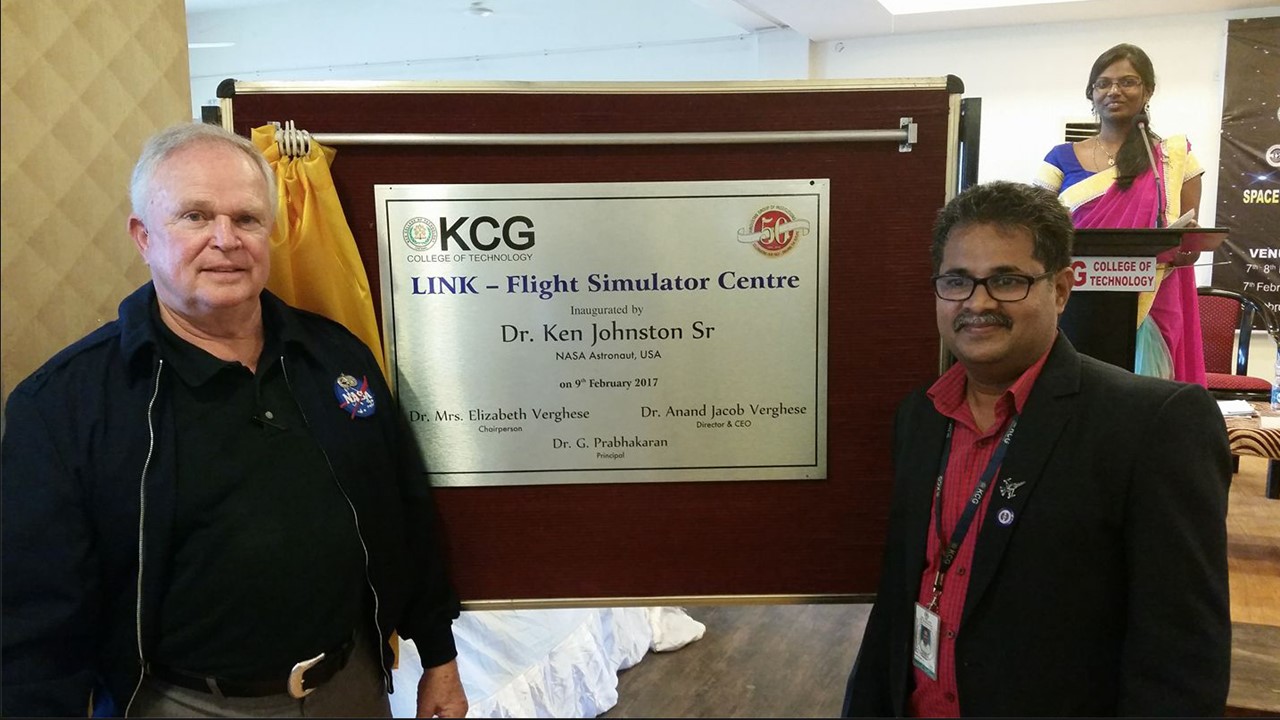 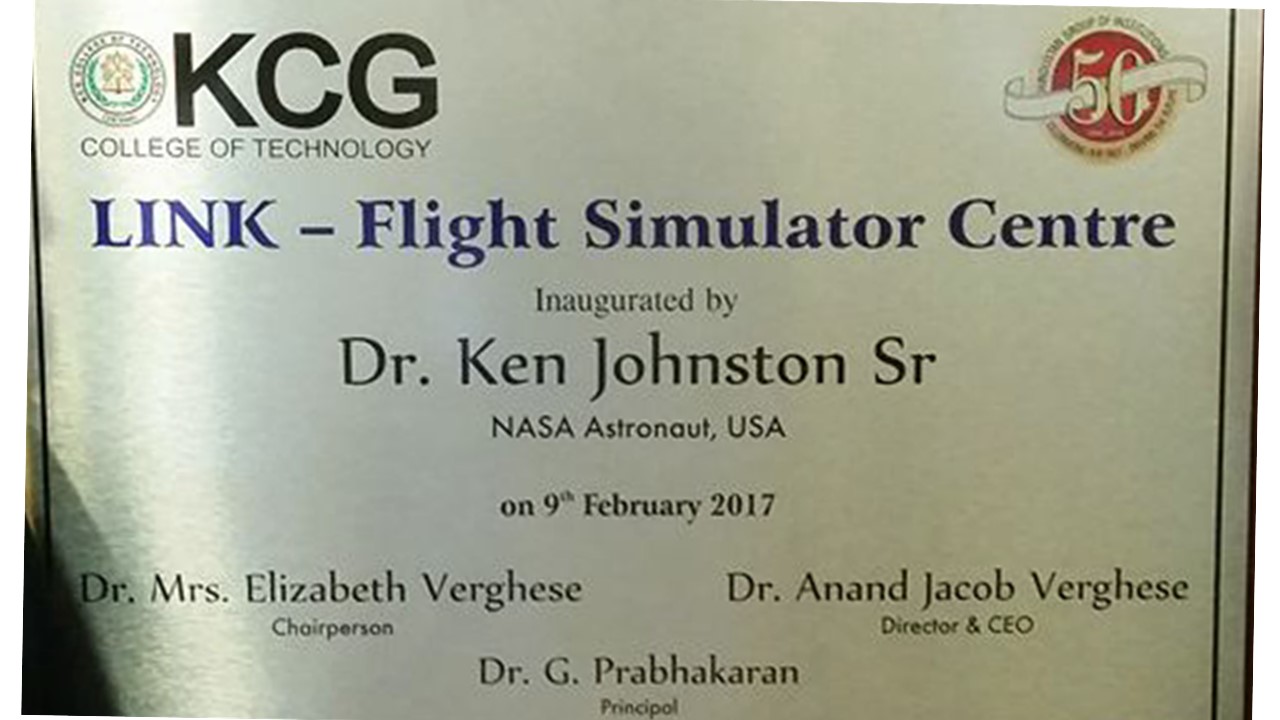 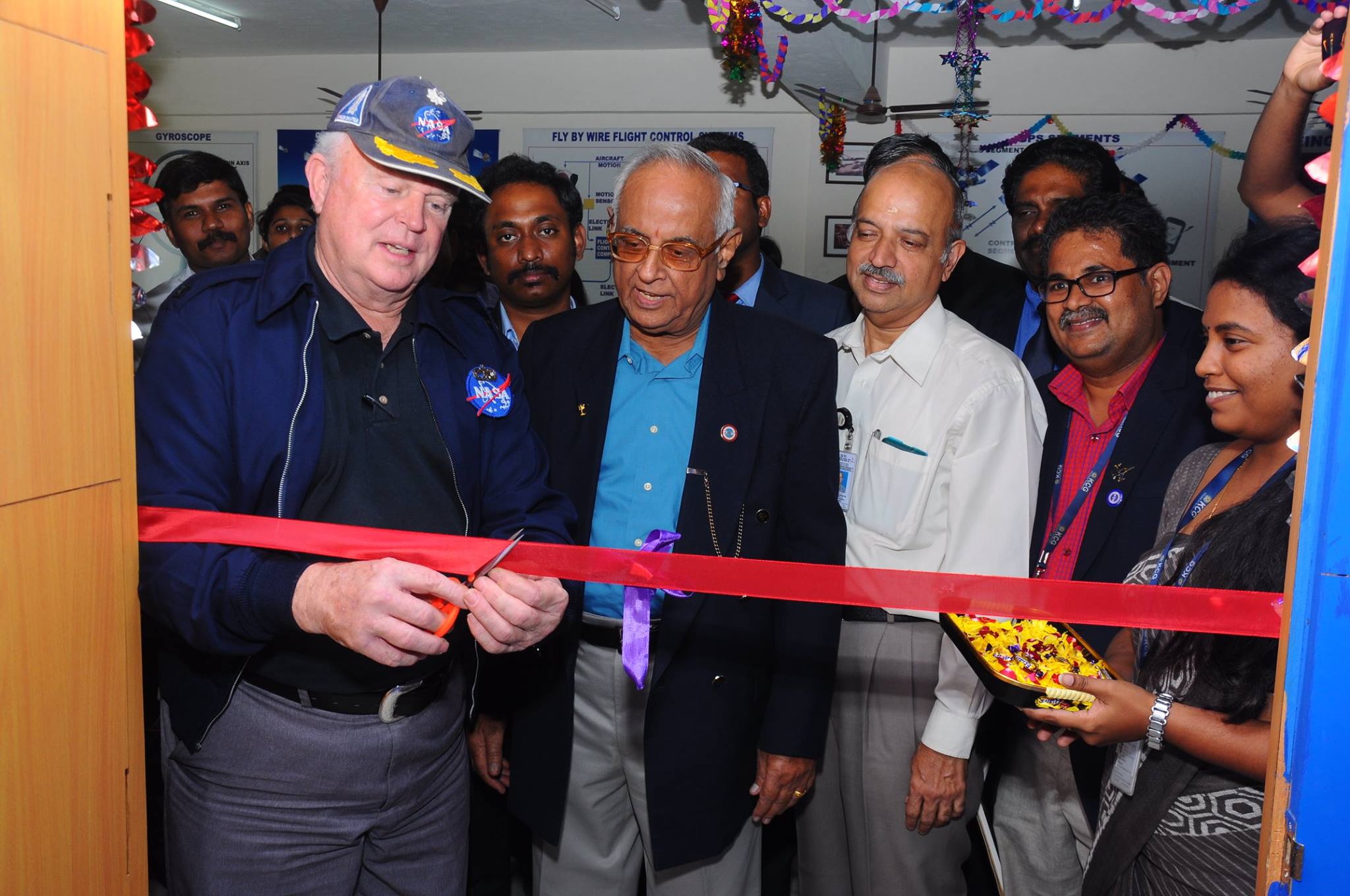 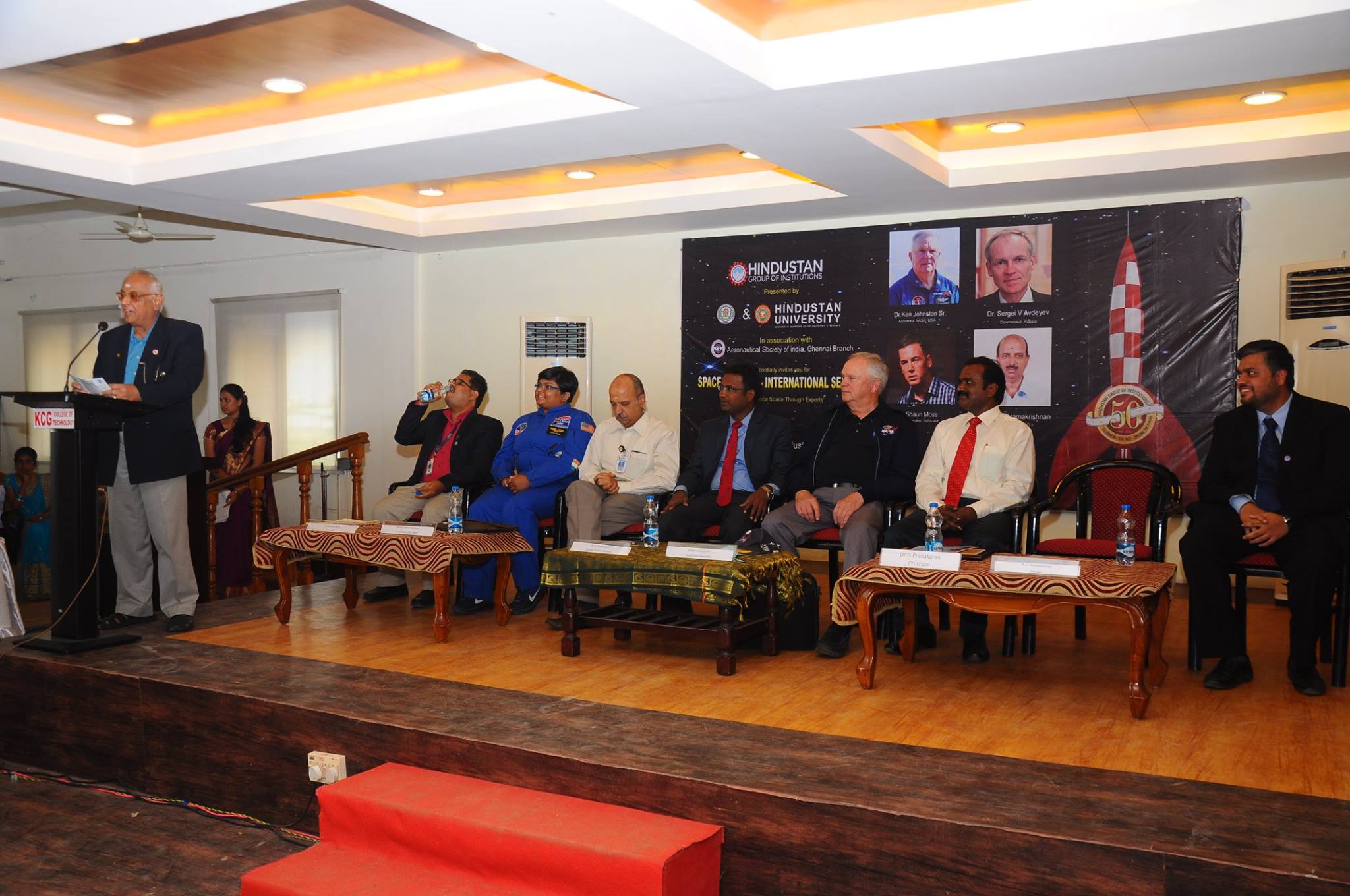 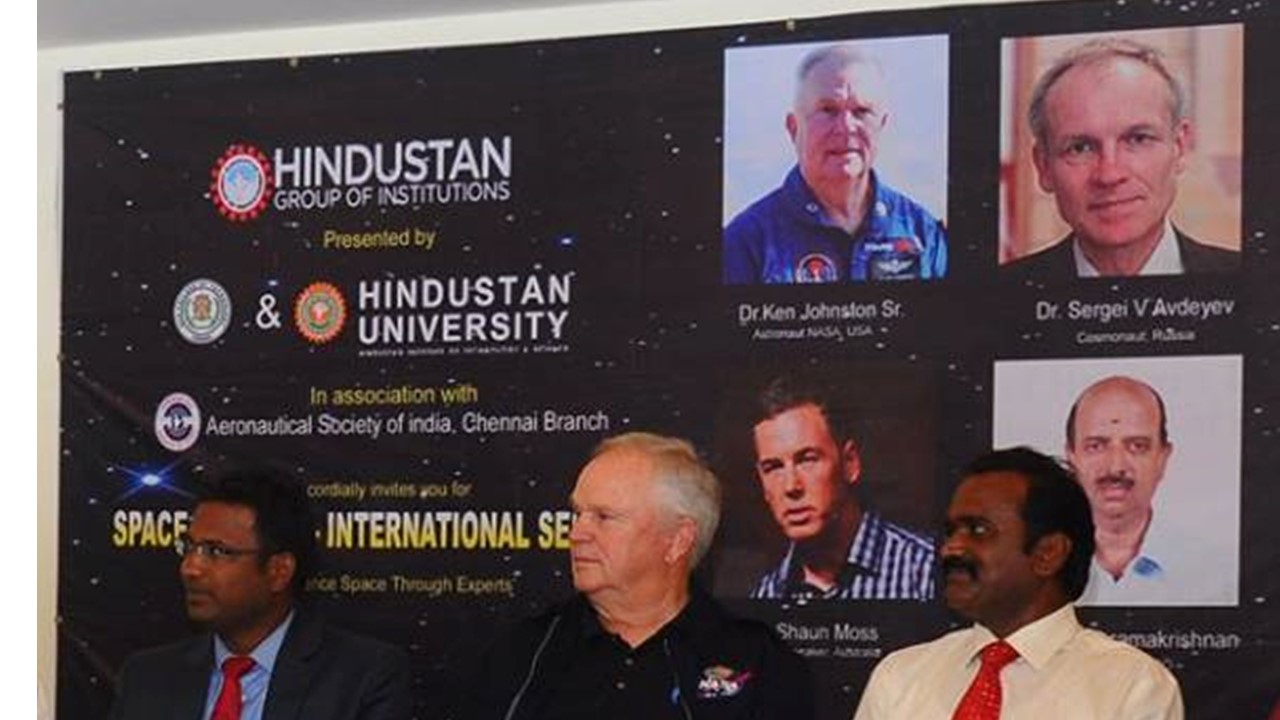 posted on Feb, 14 2017 @ 12:02 PM
link
Local news is full of stories about how excited the students were to meet a real astronaut

posted on Feb, 14 2017 @ 12:11 PM
link
Most surprising for an institution of higher learning, the Indian professors never found out his "PhD" was a worthless certificate bought from a post office box in Denver. www.jamesoberg.com...

originally posted by: JimOberg
His most recent activity was his book of 'secret Apollo photos" showing alien bases on the moon.

Hey at least somebody over there is talking about them 👍

posted on Feb, 15 2017 @ 10:31 AM
link
India has always been a dubious place when it comes to science & technology. They have some dodgy scientists (like the guy who claimed he found signs of life in a meteorite) or dodgy projects (like a supercomputer allegedly based on ancient Vedic belief).

So no big surprise an American conman/hoaxer was able to fool them.

Poor kids, they didn't even meet a real doctor.

originally posted by: scobro
I may be wrong but, something tells me you don't like this individual much!

By no means, I like the guy, he's a sweet old geezer -- and i have no problem with our generation BS'ing the kiddies about what we actually did. It's when he gets into vicious accusations of fraud against people I worked with, now unable to defend their own reputations, that i draw the line.

posted on Feb, 18 2017 @ 01:57 AM
link
I take your point, but I do have a problem with BS-ing the younger generation. There are enough of them who think it's BS to start with without this guy and others like him adding to it by making a living telling lies - even if they've been telling them so long they've started to believe them.

originally posted by: OneBigMonkeyToo
I take your point, but I do have a problem with BS-ing the younger generation. There are enough of them who think it's BS to start with without this guy and others like him adding to it by making a living telling lies - even if they've been telling them so long they've started to believe them.

Agreed, especially when he uses his FAKE credentials to support the credibility of his FAKE UFO stories. That's why I've dug out the actual facts about his biographical claims, and used them to debunk his UFO stories. But there are plenty of other harmless old guys with stories that happened to other people, that they 'remember' happening to them -- but those stories were REAL and the actual authorship is unimportant.

posted on Feb, 22 2017 @ 07:05 PM
link
I've found TWENTY personal Facebook pages where Indian kids and their families were thrilled to meet a "real astronaut". This is very sad.


Meena Swain added 3 new photos — with Rudra Biswal.
· February 7 at 8:38pm ·
It was a day of dream ...most exciting one...for Richul...to have some time with Ken Johnston, Director of Apollo Mission who has landed on Moon.
And
Shaun Moss,Mars society Secretary .Work of Mars Society is about planning about the future at planet mars. Planning about how developments can be made to make human settlement possible in mars.
www.facebook.com...

Srimathy Kesan added 13 new photos.
· February 8 at 1:34pm ·
"Athidhi Devo Bhava", to our special guests who made it all the way from the United States, Australia, Russia, Netherlands and our own desi Scientist.
Thank you Dr. Ken Johnston Sr, Civilian Astronaut, Pilot and Apollo Astronaut trainer, NASA, Mr. Shaun Moss, Chief-MARS Settlement and Tedx speaker from Australia, Mr. Karthik Kumar, Analog Astronaut from Netherlands, Ms. Olga Pogosyan from Moscow Aviation Institute, Moacow and ofcourse our own Space Scientist Mr. Jayakumar for accepting to come to Chennai for the culmination of "I 4 India- Ignite, Inspire, Invent, Innovate for India.
The gala "athidhi bhojanam" was served at home today.... felt sooo happy and content. Never in my wildest dreams did i ever think i would be cooking for such real life heroes.. Thank you God, thank you for such'an opportunity...
All good things have to come to an end and so is this, absolutely ...so very difficult to bid byee to them.. but, guess..tat is LIFE...

Anita Kommareddy A best pleasing pic I could see on this morning!!
It is an honour for you sree!!
I m sure you must have floored them with your hospitality!!...See More
Like · 1 · February 8 at 6:51pm

Reshma Razack Wonderful sree ji. ..they might have felt true hospitality at you home....because your a one such person filled with love nd care..I do remember on navarathri festival our global bmmschool kids visited your home nd we could feel the joy on there fa...See More
Like · February 8 at 8:01pm

Madhavi Balamurali U r truly a Bindazzzzzz in evry way my darling 😍 😍
How lovely to see the pics and u r evergreen hospitality 😘 😍 😘
Like · February 8 at 10:18pm

Avanthitha Roshan Rajesh Lodha Very Nice
Like · February 9 at 12:13am

Balakrishnan Shinivas Nice to view all ..
Like · February 9 at 9:41am

and
“Finally meeting a NASA astronaut KEN JOHNSTON; life is really taking different turns giving me motivation to propel towards the modified end.”
Balkar Singh Good. keep it up
Like · Reply · February 7 at 7:30am


and
Syam Narayanan S
· February 10 at 1:16am ·
With Ken Johnston Nasa Astronaut
www.facebook.com...

Kushal Roy added 3 new photos.
· February 7 at 9:32am ·
Today Dr.Ken Johnston Sr ( Astronaut NASA, USA ) had a visit to our university. ...I'm proud to meet him and I would like to presurve this memory for ever.
www.facebook.com...

Hindustan International School added 18 new photos.
· February 7 at 8:07am ·
Space is for everybody. It’s not just for a few people in Science or Math or for a select group of astronauts. That’s our new frontier out there, and it’s everybody’s curiosity to know about space.
Today @HIS,Guindy students from Grade 3 to 7 had a mind blowing interactive session with Dr.Ken Johnston Sr., Astronaut, NASA Whistle blower, Mr.Shaun Moss, International TEDx Speaker, Mars Research Station. Students got answers for their questions related to Mars, black hole, becoming an astronaut, galaxies and so on. Have a glimpse of it.
www.facebook.com...

Razi Qurashi added 4 new photos.
· February 12 at 12:51am ·
Dr. Ken Johnston, Chief trainer and Test Astronaut of NASA, visited the B.M. Birla Science Centre and witnessed the Planetarium show on the Universe and the 3D show today and he was very impressed with both the shows. He said that he looks forward to visiting India again very soon. The event was organized in collaboration with SPACEADHYAAN, HYDERABAD .IQNEWS
www.facebook.com... 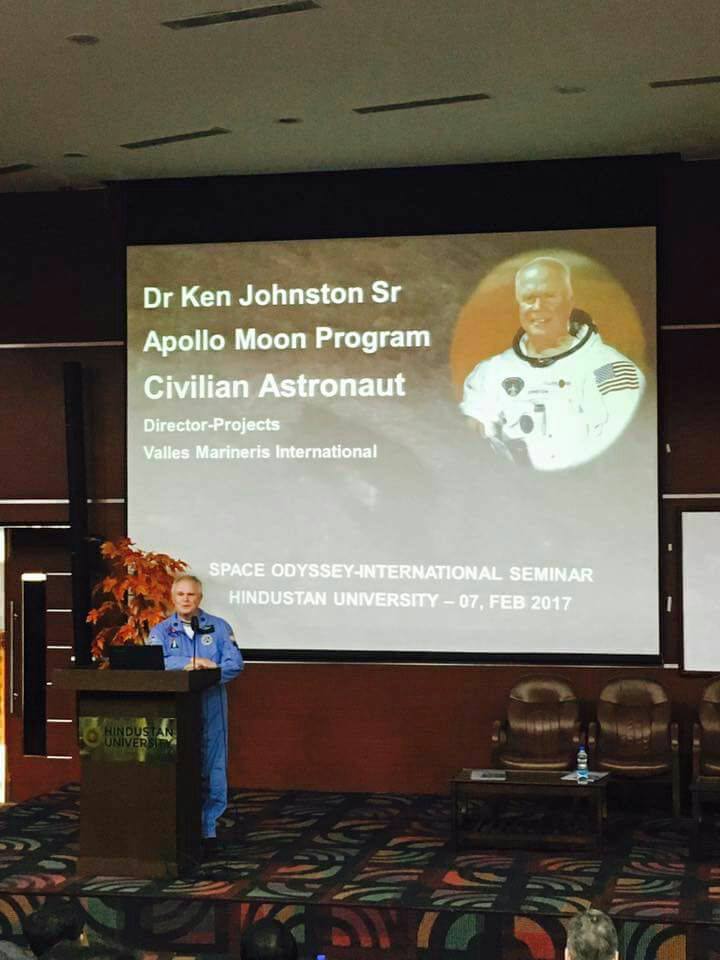 The image of him in the Apollo suit is a FORGERY, here's the original... 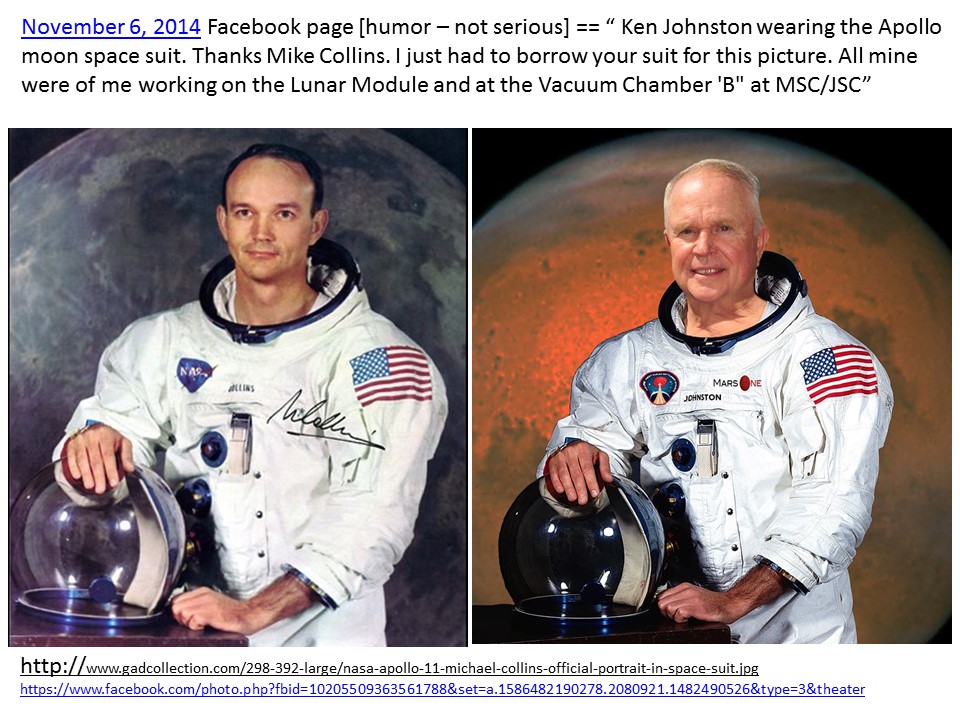 www.assamtribune.com.../at056
[about the] the first Assam Science Festival to be held on February 27 and 28 at Srimanta Sankaradeva Kalakshetra. …To be organised by the Assam Science, Technology and Environment Council (ASTEC) jointly with the Assam Energy Development Agency (AEDA) in association with AMTRON, the festival will have the presence of senior space scientist Dr Ken Johnston from the US and interactive sessions with eminent innovator Uddhab Bharali and Rubik Cube genius Kavyanil Talukdar.

Here's how the local press reported it: