Trump, the lunar economy, and who owns the Moon?

...President Trump and his administration is investigating, what they are calling, "the large-scale economic development of space."

The ambitious plans for commercially exploring space outlined in the documents propose potential new moon landings within the next three years as well as, "private lunar landers staking out de facto 'property rights' for American on the Moon, by 2020."

...The Outer Space Treaty, developed in 1967, and currently signed and ratified by the majority of nations on the globe, outlines the general legal framework for modern international space law.

...the Treaty states that it, "is not subject to national appropriation by claim of sovereignty, by means of use or occupation, or by any other means."


Trump, the lunar economy, and who owns the Moon?

Communist and other government take-overs generally result in appropriated property and disrespect for previous business agreements. But so-called 'civilized' nations respect the agreements signed by previous administrations on behalf of the nation. Such respect for 'agreed-upon-rules' is purportedly the foundation of civilization.

However, President Trump says he is backing out of a range of previous contracts, including NAFTA, NATO - and the Outer Space Treaty, developed in 1967, currently signed and ratified by the majority of nations on Earth.

Specifically, the Outer Space Treaty states that the Moon "is not subject to national appropriation by claim of sovereignty, by means of use or occupation, or by any other means." But Trump wants to dismiss the Treaty, and privatize the Moon.

My big problem with most international agreements, especially so-called "free trade" ones, is that they position and legally establish global corporations as our corporate rulers. So if Trump wants to go after them, I say have at it.

My concern is that maybe Trump just wants to position himself and his buddies to do the looting, raping and pillaging - not just on Earth, but also on the Moon, and in space too.

That ambition is inside internal documents reported by Politico on Thursday that describe what would be a dramatic shift in mission for NASA.

…NASA would focus on boosting human activity in the cislunar region—the space between the Earth and the moon—as opposed to venturing deeper into the solar system. The space agency’s main goal, they say, should be “the large-scale economic development of space.”

The Trump administration is seriously considering a major new initiative to privatize much of the space sector, promote a return to the moon by 2020, and aim for Mars and other Solar System targets soon thereafter. This, according to Politico.com’s Bryan Bender, citing Trump administration internal documents obtained by Politico.

The central aim of the administration’s new policy under consideration will be the “large-scale economic development of space,” and it will entail such revolutionary moves as fully privatizing lower-earth orbit, allowing for the mass deployment of private space stations, and freeing up NASA to return to cutting-edge research in new realms like manned exploration of interplanetary space.


The big changes that may (not) be coming to NASA

…“If this initiative can be approved quickly by the White House, and appropriately funded, we will see private American astronauts, on private space ships, circling the moon by 2020.” (Emphasis in original.)

Trump advisers' space plan: To moon, Mars and beyond

My concern is that maybe Trump just wants to position himself and his buddies to do the looting, raping and pillaging - not just on Earth, but also on the Moon, and in space too.

Trump is probably of the belief that "possession is 9/10 of the law" and "it's better to ask forgiveness than permission".

Nothing would surprise me with this administration.

posted on Feb, 14 2017 @ 11:32 AM
link
A Billionaire business man as POTUS and you're concerned he may be positioning himself and his cronies to make further $Billions?

When he does his raping and looting, at least he would have done it better than any other rapist and looter that has gone before him, eh?

And position for Plausible Deniability, and just throw your buddies under the bus when things get dicey.

posted on Feb, 14 2017 @ 11:35 AM
link
Zuckerberg, Bezos, Musk, and a hundred more are trying to do the same thing.
I say fu%k em, let trump put down ground rules.
Facebook has enough money, and I currently like the moon, and don't want it shaped like the apple logo...

Not only do I fear that you are right, but I also worry about Trumps willingness to give in to Military Industrial Complex and their strategic initiatives for the future.

I believe that a major facet to Trumps election is his willingness to do and say anything to anyone in the pursuit of money and power for himself and his cohorts.

I also believe that if the generals and companies got in his ear about securing america by securing the globe via securing space, Trump would eat that up so fast our heads will spin. I believe that's exactly what may be happening.

Trump is probably of the belief that "possession is 9/10 of the law" and "it's better to ask forgiveness than permission".

Nothing would surprise me with this administration.

If possession is 9/10 of the law, then the Greys own the moon. 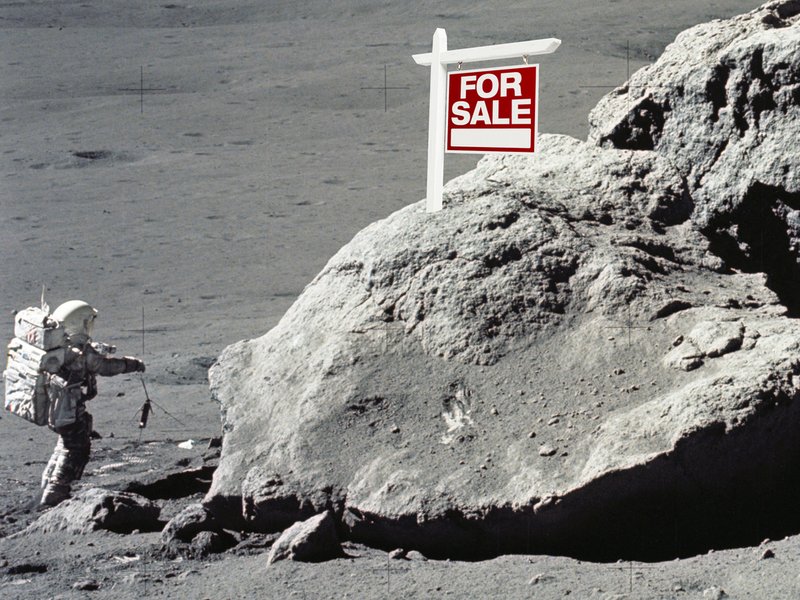 And after one buys a portion of the nice rock...just sit back and relax..and enjoy the view!

I guess this is not the case from the OP. LOL

Edit: But if Mr. Trump is going full retard NASA and space privatization I can so see him on Rogue One flying around doing quality control checks throughout the orbit and beyond

Well hello again Wizard. I agree with crow that any space or moon initiatives that Trump endorses are really only so he can try for a bigger piece of the pie. You also point out that you believe that he will do and say anything in pursuit of money and power for himself and his cohorts which is to me is a true understanding of his presidency.

Trump is a single minded man. All of it directed to those goals, money power and the support system to keep it rolling.


I also believe that if the generals and companies got in his ear about securing america by securing the globe via securing space, Trump would eat that up so fast our heads will spin. I believe that's exactly what may be happening.


I think Trump is not so much concerned about 'securing America' as he is about securing his own power and profits.

...That said, I also think a major nation reneging on signed contracts is not such a good precedent to set for the future of our planet.

But those people are liberals.

You will never see any of the liberals on ats whining about them when they do/want the exact same thing.

All that matters is the "D" or "R" by their name. (no one in their right mind cares about the independent parties)

posted on Feb, 14 2017 @ 12:27 PM
link
the problem with the UNOOSA treaty is that all the major space faring nations have yet to sign it. so russia, USA, china, japan, india, nor ESA have signed the treaty. the moon is essentially a free for all. btw is anyone else surprised that even when proposing going back to the moon, liberals still think its an evil ploy by trump for his pocket book to profit? it just blows me away how out there its getting.
edit on 14-2-2017 by TheScale because: (no reason given)

I am all for accelerating humanity's space program but America has no more claim to ownership than the rest of the planet.

One of his "advisors" is Elon Musk, right? I cry "conflict of interest" and ask him to recuse himself from anything space related! What better way to conquer space than nuzzle up to the teat of the robber baron throwing open the coffers to his rich buddies?

That leaves what, Moon Express. They want to win the X Prize Moon. Then sell you the opportunity to send your ashes up there! So everybody that goes to the moon can see all the other rich people that got there first and pay homage.

What was it Fight Club said, "When deep space exploration ramps up, it will be the corporations that name everything. The IBM stellar sphere... the Microsoft galaxy... planet Starbucks..." add to that "Trump's Mars Tower"

When did I become so cynical? I used to be such a nice guy...

Good luck with that. The rest of the planet will not allow that to happen.

The moon ain't the exclusive property of America, sorry.


Good luck with that. The rest of the planet will not allow that to happen.

The moon ain't the exclusive property of America, sorry.

But how will someone stop them?

I guess they can say we violated the treaty, but there's nothing to prevent Trump from saying "who cares".

Unless/until someone has a base and/or capability of preventing it from happening, everything else is just foot stamping and angry snorting...

Well, if the governments purpose is to advance knowledge and ability scientifically and technologically, why are we bothering to go back and reprove technology from decades ago? Nasa's next goal should be Mars. That's where we have not gone before.

If companies want to go to the Moon and secure resources, let them go for it. Fine. If the U.S. wants to build an exploration operating facility there, fine. If private individuals want to homestead the moon, fantastic. But I don't believe for a second that our government should be focusing on harnessing the moons resources. There's no need for it. If Trump and his buddies want private companies all over the moon, that's cool, but don't tell me that my government needs to foot the bill for setting up ways to get there.

We are a capitalist nation all day long, we are not a corporate well-fare fund. That's NOT why I pay taxes.

Don't get me twisted for some whining hypocritical liberal. I love capitalism because I want to be filthy rich, and powerful, and I want to be able to create whatever I please whenever. To that capitalist end, I believe that our government should stay out of capital affairs. I think the government is responsible for funding our exploration and furthering our understanding. I don't believe in American Imperialism. I don't believe that we have any claim over the moon, nor does any other nation.

I view space much like the beginning of this country.

Who ever got here/there first owns it.