A Brief History of Meme

originally posted by: Kantzveldt
a reply to: Byrd

Of course, there is the small question of the water lily first appearing from Nun through which khepri emerges not to mention the curious transformation of a beetle into a boy...


That's mixing an awful lot of symbolism and is mostly Ptolemaic in nature. Khepri came into existence by wiling himself to be (see Watterson, Barbara. Gods of ancient Egypt. The History Press, 2003. (Google Books link for your convenience)

The water lily does not appear through Nun, nor is a beetle transformed into a boy. In the Egyptian belief system, the boy-sun was born and the sun was then rolled across the sky by Khepri (see Watterson, above.)

The legend describes a lotus flower rising from the water. As the lotus flower opens, a scarab is revealed, then metamorphoses into a young boy crying. As his tears fall, they create humanity. We find allusions to this in the Pyramid Texts.


Your reference overstates some things. The reference to 'boy on the lotus' is actually the deity Re, newly emerged. This appears in the Coffin Texts ("Book of the Dead") not the Pyramid Texts. The Pyramid Texts do refer to the lotus but this particular scene is from later.

What the scribes often overlooked however is that there was also a frog named Kek sat upon the water lily leaf over seeing the entire process, this may however have been an hallucination induced by the fragrance of the water lily, things are uncertain.


Kek is part of a duality with Keket, and neither played an important part in Egypt compared to gods such as Sobek, Bast, Sekhmet, Re, Amun, Hathor, and so forth. His titles do not refer to him as an overseer or watcher or as directing creation. The scribes didn't 'overlook' this, nor did the priests - this is simply a modern attempt to legitimize something by calling on "ancient Egypt" references.

I think the popular present notion of Khepri rolling the Sun across the sky as a piece of dung isn't supported, the concern was with Khepri taking flight after emergence from the underworld;

Khepri who came about in the beginning, Great winged sun-disk who protects the two lands with his wings. 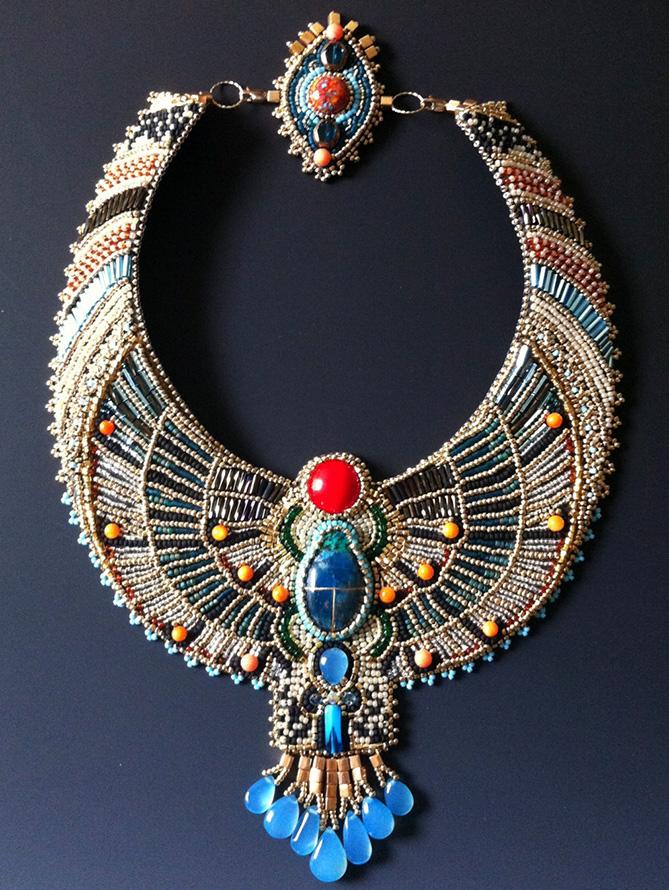 As seen above then there is also close association between Khepri and the wesekh/bead-collar, the nine leaves of the collar were considered related to the Ennead, and one could also perhaps assume this related to the opening of the lotus bud

n a scene of offering the wesekh -collar, the king describes the object as follows: “it is called Khepri together with his children

Many texts identify the nine leaves of the collar with the Ennead, another wesekh-collar scene mentions“Re between his children while elsewhere Montu-Re-Harakhty of Armantis further qualified as “Khepri in the midst of his children

There was also seen in the Book of Thoth the importance of the bead collar;

Nb‘gold’, is the nexus of an important series of puns in Egyptian, all marked by the presence, sometimes straightforwardly etymological, sometimes allusive, of the bead collar sign.

The series includes nbi ‘to melt metal’, ‘cast objects in metal’, ‘gild’, and by extension to model or fashion something generally; nbi, ‘flame’, specifically the divine flame of the uraeus; nb, ‘grain’, perhaps metaphorical from its golden color;

As the paper on word play relating to the name of Khepri indicates, he was closely related to the taking of Form

In terms of the relationship of Khepri to the young child Nefer-Atum, or the perfection of such, at Denderah this was that golden calf Ihy, son of Hathor and Horus, he could be taken as that emergent form, but there is always subtle play on words involved.

The Egyptian rḫ-iḫy, “magician, scholar”, is preeminently a knower of texts, but s/he is literally a knower of things, iḫt, a word which has the determiner of a rolled papyrus, for it has been abstracted from particular things

originally posted by: Kantzveldt
a reply to: Byrd

I think the popular present notion of Khepri rolling the Sun across the sky as a piece of dung isn't supported, the concern was with Khepri taking flight after emergence from the underworld;

Au contraire, the earliest images of Kehepri are NOT of his "taking flight"... it's in the Pyramid Text of Unas

The scarab is seen as a creator of Earth, and not a newborn sun flying to the heavens. Allen, in the commentary section of his translation of the existing pyramid texts says, "Evolver (ãprj). Designation of the Sun as he comes into being (“evolves”)
at dawn; the Egyptian name is also vocalized as Khepri." (page 430 of Allen, James P., and Peter der Manuelian. "Writings from the Ancient World: The Ancient Egyptian Pyramid Texts. 23." Arlanta: SBL (2005).)

As seen above then there is also close association between Khepri and the wesekh/bead-collar, the nine leaves of the collar were considered related to the Ennead, and one could also perhaps assume this related to the opening of the lotus bud

What is seen above is neither ancient nor Egyptian although it is very lovely. The Wesekh contained a variety of strings - twelve in this one from the tomb of Wah (link) , eight here (unless my eyes fail me) and 15-20 here


n a scene of offering the wesekh -collar, the king describes the object as follows: “it is called Khepri together with his children

Many texts identify the nine leaves of the collar with the Ennead, another wesekh-collar scene mentions“Re between his children while elsewhere Montu-Re-Harakhty of Armantis further qualified as “Khepri in the midst of his children

...which then states that these are unique and a bit later goes on to say "Horus of Edfu as a solar deity “who rises as Re, who transforms into Khepri, great god who came into existence by himself” The association with the Ennead is not well attested as your document says and may only be there in Edfu, which is Ptolemaic or later.

There was also seen in the Book of Thoth the importance of the bead collar;


... you then tive the example of 'nb' (gold) and the puns and so forth - the problem with assigning it to the Book of Thoth is that it's an ancient sign used in a lot of words and a lot of puns. It cannot be used to proclaim the importance of the bead collar in a book written after the Ptolemaic dynasty nor can it be used to explain a presumed and unproven scribal mystery school.

Your link to Ihy does not show that he's meant at Dendera... and in fact, the samples shown are from the Coffin Texts which were found NOT as a single document but a collection of texts found on a lot of different coffins, many of which are unique.

There seems little point to me in saying it was not this or it was not that when clearly the concepts are based on transformative states of change, Atum-Re-Khepri-Horus are always one and the same overall phenomena, and Khepri could be included in the Ennead as Atum or Re or Horus, in particular he related to the taking on of physical form and emergence from the Underworld, which would involve being seen to rise.

Ironically it's very easy to go around in circles with this, which is all you're doing, and that's also why the Greeks created the well organized doctrine based upon Edfu and Denderah consolidated tradition, again it can be seen here that Ihy as the son of Hathor and Horus was the natural focal point for such as representing Nefer-Atum.

Given there are utterances related to nine leaved Wesekh collars with regards to the Ennead i'd expect there were such, but there were various form of plant leaved collars, it's a whole area of study in itself.

The main pendants used as part of "plant-form" collars depict fruit, flowers, and leaves. This can be explained by the fact that such collars imitate garlands made from real plants, although at least one design, the bunch of grapes, could never had been used in such a collar.

Some of these designs can be interpreted as representations of plants containing narcotic substances. The mandrake fruit, opium poppy, and lotus flower all contain psychoactive drugs, while the grapes and date may represent fruit used in the production of alcoholic drink.

The amutetic collar, particularly the form composed entirely of nefer-signs, appears only on women. This may be a misleading impression owing to the small number of representations and examples which have survived.

Collar and necklace designs at Amarna