Of all people, Moby has the scoop on Trump

posted on Feb, 14 2017 @ 04:06 PM
link
You start with " inbred Trump followers" then go on to use Moby as a source for...well anything. MOBY! I haven't participated much here but this just really the dumbest thing I have seen on here in a long long time. What's next? An exclusive from Kid Rock?

In that three weeks there has not been sufficient time to "order ships to the coast of Iran"
In other words the ships were already there, and have been for over a decade. No one is putting the US Navy in place because they "want a war with Iran".

Of course that could be totally wrong and the Socio-geopolitical dubstep master, DJ Moby may in fact know all the inside movers and shakers at DoS and the Pentagon. He may in fact have been provided these classified and top secret details off the record so that he could use his vast reach into the public sphere to spread the word about the President.

Most likely, however he spent the week in DC dosed out on 5 hour energy and dank herbal substances and his source is Rufuss the men's room attendant at the club.

posted on Feb, 14 2017 @ 04:45 PM
link
Have you really resorted to using DJ Moby as a credible source? When he proves to be lying, who will you turn to? Jay-Z? Maybe you should check in with Katy Perry or Madonna. I'm sure they know things that nobody else knows about Trump and the GOP. I can't wait to hear what you learn from Weird Al. I'll bet that one with cause the world to end. Wow! Take a step back and look at the fact that you have resorted to anything negative you can dig up and then take a deep breath and think that maybe you have run out of BS excuses. 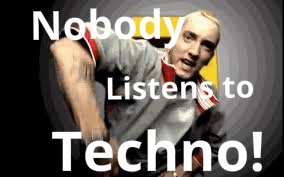 Sorry, I just couldnt help myself

posted on Feb, 14 2017 @ 05:42 PM
link
So many upset snowflake republicans in here. Nobody said it was a credible source; it's just a discussion point. Like the Obama birth certificate circus.

Calm down guys, no need to be emotional x

And people wonder why no one takes the left seriously.

posted on Feb, 14 2017 @ 07:20 PM
link
I think in future people shouldn't respond to the OP's threads, despite the humour value. It just encourages him.

posted on Feb, 15 2017 @ 07:16 AM
link
I am one of those inbred Trump followers but I cannot move on. You see, my eyes are too close together and I only have 6 fingers in total, 3 legs and one ear. It is hard to type but i will take the time to point something out.

This is who I think 90% of Anti-Trump people get their news from. The other 10% just make # up and those people work for the HuffPo, the NYT and the WashPo.

Trump is going nowhere except a second term. He has been in office for less than a month. You think the # if flying now, well, the DNC and the RNC lackeys are just very very scared. They should be.

Right because we should just let an unfriendly foreign power absconded with the most powerful office on the planet.
We should want to join forces with mother Russia.

Don't even like trump, but your post is full of the same stuff as my toilet after I finish my coffee.

originally posted by: neo96
So Moby has replaced Woodward and Bernstein.

Actually, Moby strikes me more as the 'Deep Throat' type.

People like you are the problem in this world. Not Trump, not Putin, not Moby....you.

Taking 'facts' from a he said -she said, because my DJ said...seriously?

No wonder people don't do their due diligence, too easy to eat the spoon fed pudding from media outlets and people who 'claim to know' with out any actual proof.

Remember - just because someone says it, doesn't mean it's true.

But Moby also said that the S&P and the Dow Jones will skyrocket tomorrow by a factor of 250 times it's current value, so buy, buy, buy!

Don't take advice on your car from a florist and don't take 'tips' with no proof from a DJ and the world could be a better place.

By the way Carl's Jr. has a buy a Big Carl and get a restaurant FREE promotion going now...Moby told me, it was in that Russian Dossier...
edit on 15-2-2017 by BlackboxInquiry because: (no reason given)

posted on Feb, 15 2017 @ 09:56 PM
link
I agree with this, there are a lot of Republicans that want him out of office. So does the CIA and NSA. What is likely to happen: The CIA and NSA will present evidence against the Trump administration, probably for working with Russia, and then all the Democrats and even some Republicans in congress will work to impeach him. Trump thinks he can get away with anything, but the CIA and NSA are spying on everything he does.
edit on 15pmWed, 15 Feb 2017 21:57:14 -0600kbpmkAmerica/Chicago by darkbake because: (no reason given)

I did think a few of the points listed weren't too far off the mark, but others are just...well...crap.

Which parts? Can you link a source?

originally posted by: darkbake
I agree with this, there are a lot of Republicans that want him out of office. So does the CIA and NSA. What is likely to happen: The CIA and NSA will present evidence against the Trump administration, probably for working with Russia, and then all the Democrats and even some Republicans in congress will work to impeach him. Trump thinks he can get away with anything, but the CIA and NSA are spying on everything he does.


So it's a good thing the USA can be run by the secret police?

It seems to be ok with some people.