Completely agree with you


But at least she's experienced. She can see Canada from her house

posted on Feb, 14 2017 @ 07:48 AM
link
In their usual "helpful" way, those terrorists at the Toronto Star published the following photo on their front page, but they "forgot" to include the dialogue that went with it. As a responsible on line commentator, I rush to the aid of my country and include the missing dialogue, so that Canadians will not be misled again by mischief makers. 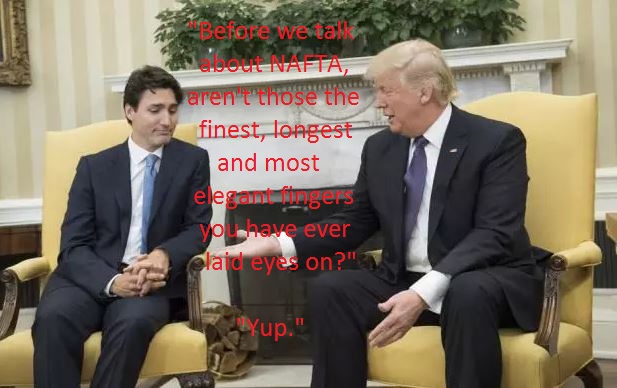 Here's the photo the Star should have run, courtesy of the National Post: 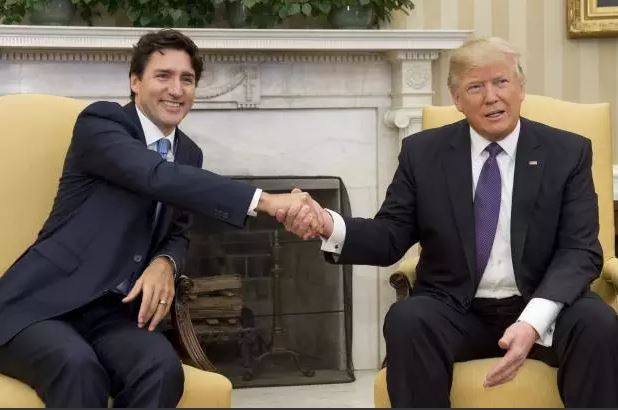 Yes, I was happy to see women's issues in the workforce being addressed by both leaders, as there is still not equal representation in many areas; the yearly stats keep giving us the same realities. Let's see where this goes - all talk and no action has always been the flavour of the day in this regard.

I also hope Donald J. meant it when he said that he is willing to renegotiate NAFTA for the benefit of both countries, which is very contradictory to his protectionist agenda. So, I am somewhat not convinced.

I think Justin had better look elsewhere for good trade deals because Canada needs trade/NATO allies where trust and cooperation is to each countries mutual benefit.

Raoul Delcorde, Belgium’s ambassador to Canada, said CETA is “essential” and suggested its ratification would send a strong signal to growing anti-trade and protectionist forces around the world. “We really look at Canada as a country that in many respects embodies the values we like, such as welcoming immigrants and refugees, in terms of getting involved in favour of free trade,” he said in an interview.

“It’s evident we are facing a situation where free trade is not as easy as it was before.

You don’t have to mention your neighbour in the south.”

posted on Feb, 15 2017 @ 08:30 AM
link
I hope this CETA trade deal will give a leg up to the middle class, but it seems we need to look at many other issues, such as food safety, corporate accountability, job security, environmental standards, consumer protection and who knows what else. Is this a knee-jerk reaction to Donald J.'s protectionism?


"By adopting CETA, we chose openness, and growth and high standards over protectionism and stagnation," said Artis Pabriks from the European People's Party, calling Canada an "ally we can rely on." "Together we can build bridges, instead of a wall, for the prosperity of our citizens. CETA will be a lighthouse for future trade deals all over the world."


Prior to the vote, European advocates spoke of the desire to approve the deal out of empathy and solidarity with Canada in the face of aggressive trade threats and rising protectionism and nationalist sentiments in the United States.


And it is by no means clear that most Canadians are really so eager to be the conduit for foreign investors to escape economic, labour and environmental regulation, and thereby help domestic investors escape regulation as well. Indeed, under CETA, Canada’s own exposure to foreign investor claims would roughly double because Western European companies invest about as much in the Canadian economy as do U.S. investors.

Under NAFTA, the decisions of the Canadian judiciary on the constitutionality of many laws and regulations cannot be taken as final until all foreign investors eligible to bring claims have not done so or have run out of time to do so. Moreover, no one else affected by such a dispute, e.g. a local municipality or a province or a First Nation, is given a right of standing in the juridical process – making it fundamentally unfair as well as undemocratic.