Trump is the first 'gay' president

page: 1
34
<<   2  3 >>
log in
join
share:
matafuchs
+17 more
posted on Feb, 13 2017 @ 01:11 PM
link
I have grown tired of the protests. Grow up. Go home. Get a job. Protest something you can change. I understand that there is anger, hate and even fear but it is unwarranted for many groups. One that is at the forefront is the LGBT community. We saw them marching on Washington and all over the country but....why? Trump is not homophobic in any way. Here is the proof.

Now, if you watch the media and the protests it seems as if the president is not for gay rights. If you listen they are afraid of losing their rights. However, the odd thing is...why?

Donald Trump is the FIRST sitting president to start his administration supporting gay rights. Yup. What makes it even crazier is the protesting and violence that is out there and driven by the media and Left Wing supporters of LGBT rights. You are shooting yourselves in the foot.


With those personal caveats behind me, I must admit that this Administration will be historic for gay and lesbian Americans. Donald Trump is the first President of the United States who was elected as an open supporter of the gay community at large and gay marriage specifically.

Let us not forget that until it was politically expedient, Barack Obama and Hillary Clinton both opposed gay marriage for the overwhelming majority of the time taxpayers paid for their lifestyles. It took Dick Cheney in 2004 and Joe Biden in 2008 for President Obama to voice support of gay marriage. Even then, it took a conservative Supreme Court to make national gay marriage the law of the land.
I know, inconvenient truths are hard to digest for the left-wing gay activists. Donald Trump has been far ahead of the crowd on several issues, including gay rights.

Despite Trump’s vocal support of the gay community for years, left-wing gay radicals targeted the GOP ticket with their usual vitriol, lies and projection. I’ve been a Republican activist since 1984, and an active gay conservative voice since the mid-1990s. If I had a dime for every time a gay liberal friend, or a gay “rights” group shrieked that the GOP was building “concentration camps” for gays in Montana…. well, I’d be able to afford to buy one of Bernie Sanders’ homes by now.

Here are a few other tidbits. Historically for a RNC convention, Donald Trump was introduced when he accepted the nomination from Peter Thiel. he is the billionaire who helped found PayPal and is one of the first tech CEO's of high profile to come out. He was not a speaker the first night as a footnote. He introduced Trump AFTER his daughter had spoken.

Then there is the voice of conservative LGBT in Milo Yiannopoulos. An openly gay journalist who not only has been threatened but has had speeches shut down because of the violence of protests. People protesting for equality who if they were Right or Centrist would be labeled as haters and homophobes.

So congrats to you Mr Trump! Next, maybe we will take a look at how un-misogynistic he is....

MysticPearl
+10 more
posted on Feb, 13 2017 @ 01:16 PM
link
The most anti-gay segment of the world's population comes from Islam, where they can and do kill you for simply being gay and even moderate Muslims, polled in the UK, all agreed being gay is wrong and half supported it being criminal with penalties, up to and including death.

So that Trump wants to eradicate radical Islam while the left openly supports it is all the proof you need he's the most gay-friendly president of our time.

I can't wait for your next clickbait rant: "Trump is the first black female president."
edit on 13-2-2017 by MrSensible because: (no reason given)

Cant say whether Im disappointed or relieved thats not the case

The only people so far that I can tell Trump is against is ISIL, Illegal immigrants and Iran.
Swap Iran for Saudi Arabia and Id say that was Americas foreign concerns addressed
edit on 13/2/2017 by IkNOwSTuff because: (no reason given)

Tump is the first 'gay' president

Pics or I didn't happen.

I have wondered the same...seems none of the LGBT protesters have researched much of anything about his stance. If they had, they wouldn't be protesting. I find it rather funny, but I also see the future of both women's rights and LGBT rights groups all claiming they made a difference because Trump now supports them, even though he has all along.

I also find it humorous that these folks support Muslims and Islam solely because of the fact that even moderates believe being gay should be punishable and women are not equal to men....it's like they are arguing for the US to revert to the 50's....

matafuchs
+3 more
posted on Feb, 13 2017 @ 01:40 PM
link
Man, look at the hate. Click bait? I am giving true examples of how he is the FIRST sitting and elected president to support gay rights prior to election and he is a Republican who in the eyes of the left want to hang gays.

You think you are being funny or clever but...

Bill Clinton beat him to it.

Bill Clinton: "I Loved Being Called The First Black President"

In order to protect Americans, the United States must ensure that those admitted to this country do not bear hostile attitudes toward it and its founding principles. The United States cannot, and should not, admit those who do not support the Constitution, or those who would place violent ideologies over American law. In addition, the United States should not admit those who engage in acts of bigotry or hatred (including "honor" killings, other forms of violence against women, or the persecution of those who practice religions different from their own) or those who would oppress Americans of any race, gender, or sexual orientation.

Trump sure is anti gay, and hater of women.

He prolly hates puppies,and kitties too.

Can't say nothing bout it.

That pesky first amendment and all.

If it isn't clear to anybody by now that Trump isn't this demon he's painted out to be, you need to confront your own demons and reflect hard in front of a mirror or something.

I have to say op that yes the title was click bait but before I clicked I noticed the flag count . Being just a little puzzled I came in to see what this new Trump bash thread was about . Low and behold its not a Trump bash thread but a realistic look at the Gay issue that the left is either not looking at or has not got a clue about . I vote for the latter .Its too obvious in this post that that is the case .

posted on Feb, 13 2017 @ 02:12 PM
link
Historic Fact: Donald Trump Will Be The First President To Support Gay Marriage From The Beginning

I know, it's a hard fact for liberals to wrap their mind around. Even Obama was against gay marriage until he ran for re-election 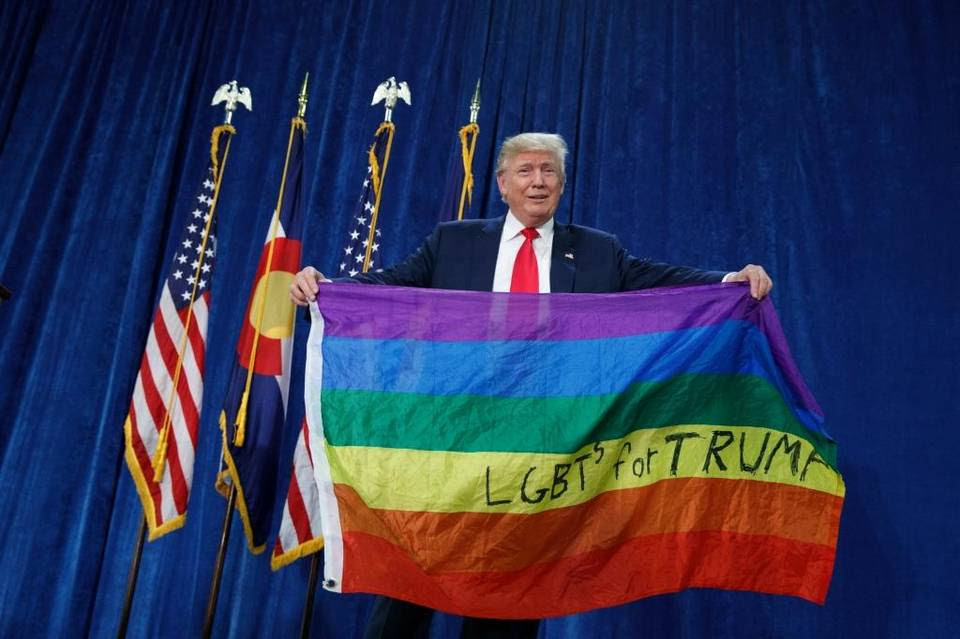 I am not whining about protests. Saying I have grown tired is not whining. It is pointing out the hypocrisy of those who are protesting.

Can you debunk anything that I wrote? I would say no or they would be a 54000 character diatribe dedicated to the Head Cheeto.

I can't wait for your next clickbait rant: "Trump is the first black female president."

If that's the way he self identifies so be it who are we to argue.

Statistics are made up on the spot 87.9 percent of the time.

Statistics are made up on the spot 87.9 percent of the time.