You speak for the whole world now do you?


No, apparently the partisan, left wing media does that.

I didn't say a thing about the poll. I simply said I've given up trying to reason with idiots.

Stop putting words into my mouth.

I didn't say that you said anything.
I asked a question.
You can tell it was a question by the squiggly line and dot... like this ( ? ).

The GOP is already walking back the rhetoric they have been spouting since the ACA was passed. Up until they had all the power it was all about repeal. Then ur was repeal and replace. And now it's fix the ACA.

They clearly have no idea what they're doing. At this point it looks like best case scenario is they will essentially change nothing but call it something like Trumpcare or Republicare.

I didn't say a thing about the poll. I simply said I've given up trying to reason with idiots.

Stop putting words into my mouth.


Forgive me if this post is circle-jerking (as you so eloquently put it) in your mouth...
1. but you're still here (replying to members who oppose the OP's/poll's claim)
2. you're done trying to reason with idiots

...that must mean those supporting the OP are the idiots - since about only 14% of posts are from anti-Trumpers.

Soooo... welcome aboard!! We're always looking to onboard more conservatives!!!
edit on 5610x6756America/ChicagovAmerica/Chicago2 by six67seven because: super-great-awesome edit

So explain clearly how Obama Care didn't address issues like this:
Old drug gets an absurd price hike to $89,000 Dollars per year [deflazacort]

How about you first point out where I said that Obamacare was perfect and there were absolutely zero problems with it?

I asked you a straight up question and you cannot even back up the flaw in Obama Care. But yet, you have all this snowflake energy to attack the Republicans for fixing the health care system. Quit being a total democrat by not answering straight up questions. It reminds me too much of crooked Hilary.

I keep seeing this as if people think that's a valid point. Exactly why do you keep assuming we care what you think? Honestly, why would you even begin to believe that?
You are a non issue. Deal with it.

But again, this is on the Republicans. They are the one insisting on repealing and replacing instead of just fixing it. Of course we know why they are being stubborn and not fixing it. That would mean they'd have to admit that something Obama and his democrats did was good, and we can't have that.


It can't be fixed because it was designed to be replaced by single payer.

Why can't they attack the politicians? Freedom of the press baby.

Yet the Republicans are flinching with the repeal thing. This is current reality, whether you want to admit it or not.

lol, the new administration is a couple weeks old. You guys are going to wear yourselves out early at this rate.

And The Trump team is in total disarray, melting down....talk about worn out.

When you drive away the top intelligence post in your team...somethings very very very wrong, believe me very wrong.

Kelly Ann and Bannon are next. His daughter hates them. The info is out there if anyone wants to look. His white house is full of leaks and hemorrhaging information to the press. And Trump is powerless to stop it. One of his top advisers is a mole.
edit on 13-2-2017 by olaru12 because: (no reason given)

edit on 13-2-2017 by angryproctologist because: fogot the stop signs

Team Trump hasn't even broken a sweat yet.

None of the Trump voters believed that they were going to get free anything except free from Obama.

I'm certain you are aware that you can't say that for the other side.

So which side had the most moral, grounded andpatriotic position?

Among those who do support it you have to wonder how well thought out their position is- by a 51/23 margin Trump voters say that the Bowling Green Massacre shows why Trump's immigration policy is needed.

It's a quote like this one from the PPP article that makes me question the accuracy of this poll.

There is no way in hell that the question was. "Why do you believe Trump's immigration policy is needed?" and the response by more than half the polled was "The Bowling Green Massacre." Anyone who has heard of this "massacre" knows it never happened. Which means the people being polled were baited.

The question was roughly, "Do you believe the Bowling Green Massacre shows why Trump's immigration policy is needed?", to which people responded "yes" or "no".

I could go ask 100 people if the Nome bombings show why Trump's immigration policy is needed and get a 50% confirmation rate.

This is classic baiting and can be seen on a number of BS youtube channels in an attempt to showcase the stupidity of one side or the other. 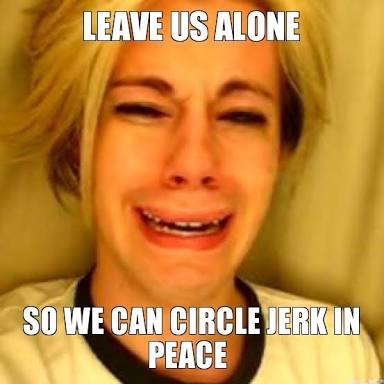 Damn Right Wingers don't even know their memes. I think you meant to post this.

The funny thing is that-back when Chris Crocker made the Leave Brittney Alone video-I made a parody video of it and sent it to him.

His meltdown email response was epic.

The video is still on youtube,but it is waaay too offensive (and funny) for me to link on ATS.

1. I didn't think I was a right-winger, but I appreciate the clarification. Do I get discounts now?

2. I wanted to switch things up a bit. Convention be damned.

"But let me not be hard on the Tweeter-in-chief: disdain for expertise is general in his party. For example, the most influential Republican economists aren't serious academics with a conservative bent, of whom they are many; they're known hacks who literally can't get a number right."

"But now things have gotten real, and all indications are that the people in charge have no idea what they're doing, on any front.
In some ways this cluelessness may be a good thing: malevolence may indeed be tempered by incompetence. It's not just the court defeat over immigration; Republican ignorance has turned what was supposed to be a blitzkrieg against Obamacare into a quagmire, to the great benefit of millions. And Mr. Trump's imploding job approval might help slow the march to autocracy.

But meanwhile, who's in charge? Crises happen, and we have an intellectual vacuum at the top. Be afraid, be very afraid."

when Chris Crocker made the Leave Brittney Alone video

The video is still on youtube,but it is waaay too offensive (and funny) for me to link on ATS.

I probably wouldn't have watched it anyway, even if I did know who you were talking about.