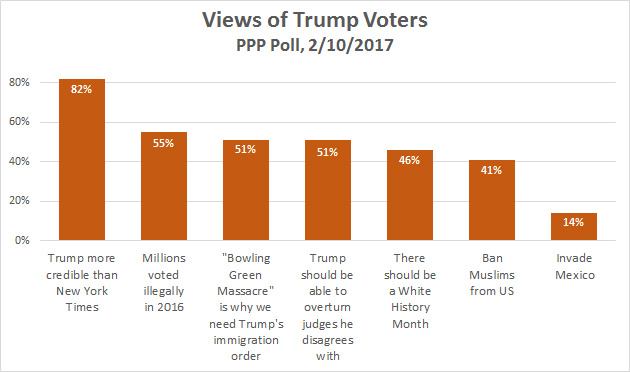 Only 14% of Trump Voters Want to Invade Mexico

Wow I knew some weren't bright since they voted this guy in. I mean this is the guy who promised to drain the swamp but has only filled it with more despicable people such as his friends. His policies are beginning to prove one thing, he doesn't care about the little guy but cares about his friends making more money off the environment and screwing the regular joes.

Can't wait for his health policy, I am going to guess it will only benefit the insurance companies but his followers will continue to believe he has their best interests at heart..LOL

TheBulk
+47 more
posted on Feb, 13 2017 @ 09:40 AM
link
I wonder what percentage of Democrats/Left, believe in the wage gap myth or the 1 in 5 rape myth? Where are these sorts of stories when Democrats are in power? The answer is, they dont exist. At least, not from the mass media.

originally posted by: cantthinkofausername
Can't wait for his health policy, I am going to guess it will only benefit the insurance companies but his followers will continue to believe he has their best interests at heart..LOL


There will be no health policy. The Republicans in Congress can't come together to write one because they can't get around the fact that all the popular parts of the bill would have to be severely curtailed in order to do what they want. Then if they try to "fix" the bill it will destroy their credibility. I expect that they will slowly try to push this under the rug and hope the public forgets about it.

More polls to make you feel good about your bias? Did you learn anything about polls over the past year?

Have you ever considered that your media is constantly lying to you or will you continue living in denial? I'm fine either way really, because your delusions guarantee you will stay out of power.
edit on 13-2-2017 by TheBulk because: (no reason given)

and my new number 5.

5. There should be free and open travel to known TERRORIST states.

If you think Trump supporters are 'insane/crazy' yall need to look in the mirror.

Apparently Democrats had no strategy to make Obamacare work. Just shove it through to find out whats in it. You see it's hard to believe you're genuinely concerned when you turned a blind eye to the last 8 years.

But again, this is on the Republicans. They are the one insisting on repealing and replacing instead of just fixing it. Of course we know why they are being stubborn and not fixing it. That would mean they'd have to admit that something Obama and his democrats did was good, and we can't have that.
edit on 13-2-2017 by Krazysh0t because: (no reason given)

One reason I am never truthful is because the calls come into my business line, at night, usually after 8 PM and I'm quite annoyed.

Wonder when this poll was taken. May have missed an opportunity to again lie.

..If it confirms what you already thought to be true....it isn't fake at all!!!

originally posted by: cantthinkofausername
Only 14% of Trump Voters Want to Invade Mexico

That is a disappointing number. I was hoping it would be higher so we could all get free Mezcal and some mole.

posted on Feb, 13 2017 @ 09:57 AM
link
The New York Times isn't very credible, I am not sure if Trump is better or worse than them. I actually do not trust much of what most MSM says, it is half truths most of the time.

I don't believe millions voted Illegally, maybe up to one million did. I would say we should actually go and check out a city like Los Angeles and review their records and check how many happened in that area. From someone I know online, he said there were areas that he saw lots of people who were not legal to vote voting. He lives there and knows the people who are illegal. I think he is at least partly Hispanic and is a citizen. I never really asked him but he lives in an area which is mostly hispanic.

I will believe what he says.

Thanks for the reality freak show. Lolll
edit on 13-2-2017 by Avicenne because: (no reason given)


FREE WORMS!
Man, I have eaten too many of those worms that I had to pay for.... now they will be free.

Thanks for that info because I couldn`t find any information on how this poll was conducted.

originally posted by: butcherguy
FREE WORMS!
Man, I have eaten too many of those worms that I had to pay for.... now they will be free.

That's Mezcal for gringos, I want the good stuff.