The Curious Details of Prime Minister Abe's Visit with the Trumps

originally posted by: Byrd
the Japanese people look down on this kind of behavior


That depends. Portrayed in the wrong light ... it could look bad to anyone. Nice job smearing your President and First Lady.

I've been to Japan on numerous 'official trips'. My 'guide' couldn't be with me 24/7 and that was a thing anyone could easily understand.

I don't think you're going to see the Trumps bowing and scraping. Now you know not to look for that. Are you still wearing the pink hat from your DC trip? LOL

Give them a pass ...AGAIN.
Don't you get tired defending bad behaviour?

It sounds like an excuse to me.
What we've come to expect from this administration.

Is it really only been twenty four days?

They don't bring it upon themselves with constant social faux pas?

posted on Feb, 13 2017 @ 07:48 AM
link
My husband's company has a Japan branch. They do weekly video conferences, and it took him quite a while to figure out why they were subtly treating him like he was beneath them. He assumed it was just due to being new to the position and having to prove himself as the new guy or something.

No.
He wasn't reciprocating the traditional bow greeting at the start of the meetings, ergo they thought he was a rude, pissant asshat blowing off respectfully acknowledging people.

Japanese manners are a very BFD to them. It may not bring on WW3, but faux pas after faux pas has the potential to bring on some very sour relations when guest heads of state of shrugged off like this.

This WAS an interesting visit, by onlookers' standards.


I think Melania has displayed that she's best at posing in photo's shoots, unlike her awkward husband who had to be told by the Prime Minister how to handle their photo shoot, "Look at me!", lol. Hosting powerful, intellectual a politically outspoken women isn't Melania's forte.

It seemed that Mrs. Abe was more comfortable with being "escorted" by the US Japanese Ambassador, while Melania was counting her substantial settlement $$, because someone suggested that she may have been employed, early in her career as a high end escort/hostess! Oh, the irony!

The Prime Minister seemed to be miffed at (so called) President Trump's ineptitude with Asian leaders, and called on the USA to affirm their support of Japan after N Korea's missile "test". Trump acquiesced sheepishly!

Abe was dressed like a school girl-no fashion-and Japan has great fashion-was she trying to look American?

Melania is going outshine anyone around her-she is beautiful, classy and understated-hard to look at anyone else when she is in the picture.

This is not a political statement. See, I didn't even address Ms. O's terrible, ill-fitting ugly garments-she couldn't help being ugly with rbf.

Here's some interesting info about both women.

After reading about both of those women, I'm laughing at the stereotypes subtly present in this thread and in the OP!!!

Aiki Abe dressed like a business women. I don't know what kind of business Melania was hoping to accomplish in her form fitting white gown!

originally posted by: loam
After reading about both of those women, I'm laughing at the stereotypes subtly present in this thread and in the OP.

The thing about "head of state", the "public persona that officially represents the national unity and legitimacy of a sovereign state", is that it can be different from the head of govt . When one thinks of England, the Queen or King comes to mind, as the symbol for England (head of state), versus the Prime Minister who is head of govt. In the USA, the POTUS is both head of govt AND head of state. The POTUS (and traditionally the First Lady) function as symbolic transmission of our values and culture, what we are all about.

For ex, here is our POTUS with Abe, not in a govt role but as head of state. 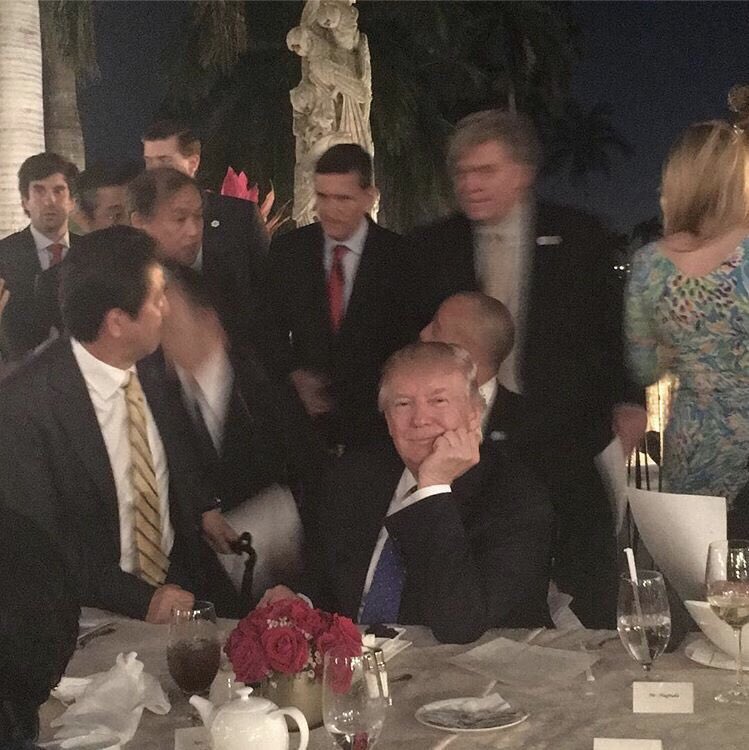 IMO world leaders will just have to get used to this new American style of head of state as well as head of govt, because I don't see it changing. It looks like the Administration won't be paying attention to foreign visit protocols as all past administrations seem to have done; ex, the Japanese who might look down on this kind of behavior.

It will draw in at least 5 million people who will believe it.

"The First Lady was very much looking forward to welcoming Mrs. Abe to the White House upon her arrival in Washington; however, she was informed that Mrs. Abe had previous commitments during her stay in DC," the statement said.

Sounds to me they didn't want the tour and had other plans already set.
edit on 13-2-2017 by Middleoftheroad because: (no reason given)

Give them a pass ...AGAIN.
Don't you get tired defending bad behaviour?


I know ... You have 8 years of criticism to catch up on yourself. Don't worry. We all know you'll be on the job!

Maybe the mister doesn't want his wife spending any one on one time with, well - anyone

My guess is that Melania will only be trotted out for events where she needs to be seen on hubby's arm in public. Or she'll be out with security and a babysitting entourage

All speculation on my part of course

originally posted by: Kali74
I blame the handshake. WTF is with that?


That's been commented on by some articles I read. It's not the cultural norm for Japanese (in fact, its considered rude) and many said that Abe looked uncomfortable.