The Definition of Bigoted,Bully, Racist and why it fits the Democrat Party

adjective
having or revealing an obstinate belief in the superiority of one's own opinions and a prejudiced intolerance of the opinions of others.

My Favorite Quote from the Democrats Queen "You are entitled to your own Opinion but you are not entitled to your own facts. " I guess thats why Obama made Fake News and why Trump morphed it into Alternative Facts. Liberals shout the loudest about LOVE but have proven time and time again to be the most HATEFUL the most INTOLERANT the most VIOLENT against anyone who happens to think differently to them.﻿

bul·ly1
ˈbo͝olē/Submit
noun
1.
a person who uses strength or power to harm or intimidate those who are weaker.
synonyms: persecutor, oppressor, tyrant, tormentor, intimidator; More
verb
1.
use superior strength or influence to intimidate (someone), typically to force him or her to do what one wants.
"a local man was bullied into helping them"

So Yes Trump may fit the noun of a being a Bully however the Democrats fit the verb.

Trumps opening Speech never said Americans were Superior. Politics is Bloodsport. He stated the problems Mexicans were bringing into my country. And he's the guy who is going to fix them. And I am happy with his overall job performance at the time and creation of this thread. He's doing what is well within his power while everyone's out to impeach him. Example: The Courts letting emotion dictate whats written law overturning a Legal Order designed to keep AMERICANS safe not the world.
edit on 12-2-2017 by Stevemagegod because: (no reason given)

I was going to use this to start a thread but after so many people complained that ATS has gotten so political and divisive I held off…..but since you brought it up…….

Since 2010 Democrats have lost 1200 national and statewide seats and are now almost exclusively a coastal party, with a couple of lone interior outposts such as Chicago and Minneapolis. Hillary Clinton beat Trump in California, New York and Massachusetts by 30%, Trump won the rest of the states by 52-48%. Thirty-two state legislatures are in Republican hands, while only five states have Democrats controlling both houses of the legislature and the governor’s mansion, in 2018 the Democrats must defend 10 U.S. Senate seats in states that Trump won…..doesn’t look too promising.

“The Democrat Party has finally turned into a small but vocal radical anti-American fringe group. Ideologically, they have become the Weather Underground without the bombs so far.

The Democrat agenda is one of class warfare, racial turmoil, mob rule, (i.e. opposing the Electoral College while supporting BLM), and the unconditional embrace of Islam.. Islam is a theocratic authoritarian religion/ideology that by definition is incapable of coexisting with our system of government, or any other government in the civilized world that fails to accept their real world intolerance of other's views.

Democrats deplore military action that is in our nation's interest, yet love the use of the Military if there is little national interest. Democrats believe that every country on Earth is entitled to govern themselves with their own best interests as their primary goal, excluding the U.S. and Israel of course.

Democrats continually find fake rights in the Constitution that do not exist, and yet they try to deny individual rights that do exist.
Democrats always oppose Justices who are Constitutional Originalists by accusing them of being extreme.
Democrats refuse to obey current immigration law with their "sanctuary cities", but they demand that the Government register American Citizens who own firearms.
Democrats celebrate "diversity" and "multiculturalism", but they condemn and mock traditional White American/European culture for essentially being at best a non existent culture, or at worst, a destructive culture both currently and historically.

Basically Democrats require two core constituencies for their existence, and without them they would cease to exist. One is a permanent and dependent underclass that is easily manipulated with lies and the promise of free stuff.. And the second is the ever present and perpetual victim class. Democrats deal in others misery, despair, unrest, and manufactured victimization is their lifeblood, and they must keep it all alive by any means necessary in order for them to maintain any kind of power. This is what Democrats will be fighting for over the next four years.”

...and I piled on with an opinion....isn't America grand. 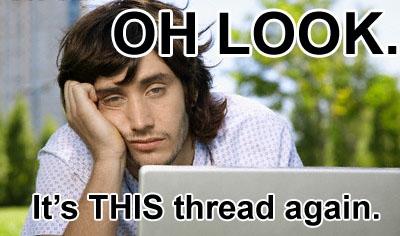 Ohhhh Jeff Lord, met him at a party 2 years ago. Lol we talked for about 1.5hr.

I basically told him how I didn't like Trump and gave him reason after reason why Cruz was way better. Trump is not our Reagan.

But we agreed on many things and problems. All I have to say is in his personal life,he is an honorable person (Jeff). I won't go into that further. We have mutual friends.

Per the thread....
Stroking people with a broad brush will never solve anything.

I will say I do find it funny though that liberals do most of this sort of preaching with most of all the destruction at the same time. But that's just in my little world of experience.

Everyone needs to be better about not being so triggered and feeling their counterpart is the enemy.


So Posting examples is Bigoted. Thats why you guys lost. No one wants to discuss the REAL PROBLEMS.

Posts like this are the only sure way to rally the left on ATS....you need to give them a big target and a dose of conservative opinion.

Your reply gave me Cancer.

posted on Feb, 12 2017 @ 05:23 PM
link
The people at the helm of the Democrat Party are the elite professional sheepherders.


Well that certainly explains why the Democrats have adopted Sharia Law over the US Constitution. 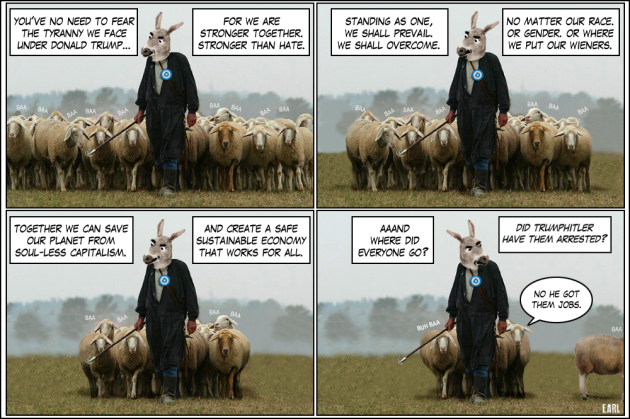 So the REAL PROBLEM is a small group of idiots doing things that upset/anger you, so all who have the same political persuasion must be the same as them...

If not, why is what you say about all democrats true?

originally posted by: seasonal
a reply to: WilliamtheResolute


I agree, I never could reconcile labeling all Democrats as stupid liberals in this post when all I really wished to do was flame the liberal leftist that I view as Socialists and anarchists.....or minions of Chuckie Schumer. originally posted by: seasonal
a reply to: WilliamtheResolute

Which is why we voted big money in so he won't be influenced by big money.

The rich going after the rich except Trump aint taking the Presidential Paycheck, nor has he ever been a Public Servant. Theres the difference. A Career Politician vs. a Businessman who made his money in the private sector while Hillary made her cash being a Corrupt Politician.