What's with the cryptic messages? Vault7


Hey at least it 4 pages without a word of Trump!

Crap, I just ruined it.

All the @AnonScan and @TheSwimSwam posts feel like they're riding the hype to troll everyone going crazy with the wait/meanings of the wiki tweets.

originally posted by: Rosinitiate
So the whole skit and the end of the "come, stay awhile" is from a movie called The Room. Here is the scene that was used in the video:

This is video I'm referring to at the very end.

When considering the scene, as the man walks into the room the girls are talking about secrets. He wants to know but she says its girl talk. So the theme here is secret.

The end she says "it'll be OK Johnny".


That movie "The Room" has been voted as one of or the worst movie ever made. That may be a clue in itself.

no worries.... that movie and the acting in it is so bad it needs to be said trice!

Hey at least it 4 pages without a word of Trump!

Crap, I just ruined it.


Lol, they knew better than that. Trumps a buzz kill now. Thats also by design.

posted on Feb, 13 2017 @ 12:48 PM
link
Well put together presentation. Lurking here, patiently, or maybe it's impatiently awaiting what comes next. Too many coincidences to be pure coincidence. Been digging around during on my own, but man, so many rabbit holes to go down & at times it becomes difficult to stay on track. Will be interesting when this all shakes out. So many threads end up spinning in circles, hope this one keeps pushing forward. Thanks again for this new path to follow, even if it's just for a short bit.

originally posted by: purplemer
Did anyone download those videos its a shame they are gone..

I tried and for seem reason it wouldn't let me. In hindsight, I shoulda put more effort into it.

Anyways, your original post of reversing coords taking you to Antarctica. I'm starting to wonder if they are alluding to the fact that Assange isn't at the embassy anymore and its being brought to our attention as best they can.

Seriously seriously creepy given what we know....

The plot as on Wiki..

When all the fast food restaurants in Springfield become healthy, Homer is forced to turn to chili dogs for comfort. Meanwhile, Lisa tries to save the school radio station.


originally posted by: purplemer
Did anyone download those videos its a shame they are gone..

I tried and for seem reason it wouldn't let me. In hindsight, I shoulda put more effort into it.

Anyways, your original post of reversing coords taking you to Antarctica. I'm starting to wonder if they are alluding to the fact that Assange isn't at the embassy anymore and its being brought to our attention as best they can.

Have a look at this thread about the news channels now heading to Anartica...


So check this clip out from episode 13 of The Simpsons. Aird last night... Seriously seriously creepy given what know.... Homer Plays Dominoes With Domino's Pizza Boxes

Going to thread that...

-The upcoming leaks of something very important is coming by wikileaks. It's being put together right now and will be uploaded or revealed soon- 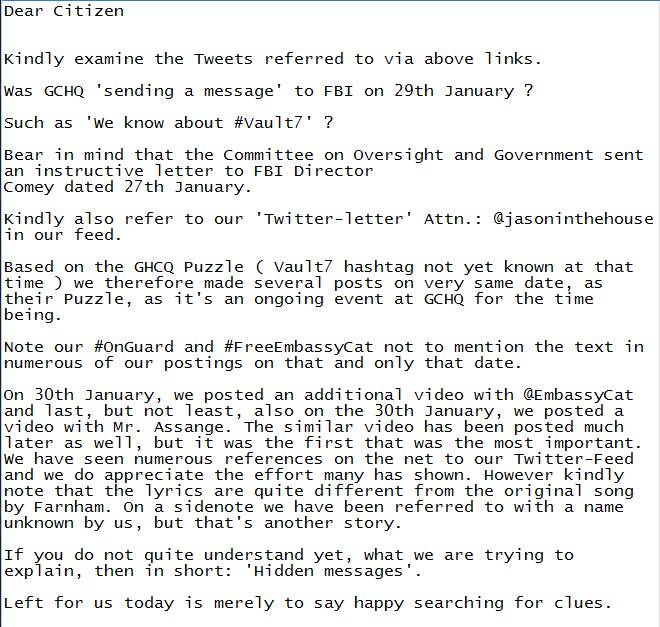 is this letter part of it or is this something discussing it who is a 3rd party? If this too is from wikileaks, I wonder if part of the clues are the many missing words and obvious mistakes in the letter...like theh go with sometjing else and build a sentence or signal a certain word in the letter each mistake. All i know is that i always hear how much thought goes into wikileaks clues and that theres nothing sloppy about them. What we see is exactly as it is meant to be so i think its not likely but still a possibility that the many missing words (THE above leaks, THE fbi, many HAVE shown etc.) and you can do something like make a list or sentence out of the words being signaled or use another source and the mistakes tell you what in THAT source is each word.

Otherwise I'm just too big a con-theo and let my imagination run wild. i must sound so stupid but sheesh even now I have a thing playing on YouTube and coincidentally the narrator just said that each clue is planned meticulously and they are flawless.

yea hI saw the letter also but no idea. It seems to allude that GCHQ knew something about Vault7 before the letter was sent.

if spelling was intentional then: sometjing could be an Anagram I suppose, like: JTM is gone *shrugs*

posted on Feb, 14 2017 @ 01:54 PM
link
I posted this in the other thread entitled "think the vault is open" but I'll paste it here too in case there's some in this thread that want to consider it:

Ok, I've been trying to make sense of all the back and forth about this issue but there's too many sources, too many threads to follow.....

However, in my travels i came across a YouTube video entitled "30 reasons assange is in room 101"


I'll paste the link but not sure if that's allowed? Anyway, it's easy to find. I IMPLORE you to go and watch that before i get onto the next bit... I'll wait...


Ok, so, assuming you've watched the video, you will see that there appears to be a possibility that Assange has been taken and his safety maybe at risk.

With that in mind, some of the stuff coming from AnonScandinavia starts to make a little more sense.

They make reference to the embassy cat, ask what does it do (it stands guard/watchful), does it have a name?"If not then perhaps it's a little bit anonymous". This can be translated as: anonymous watches over Assange.
Now, with the talk in the video about dead man's switches and insurance files, it got me thinking that this could be further translated to: Anonymous (or parts thereof, perhaps anonscan) take care of the insurance files for Assange.

Perhaps the message here is not to us but to Wikileak, those who have compromised it (if it is) or those who are in the know about Assange's welfare or even to Assange himself. Perhaps they are saying that, unless they get the prearranged response/code to assure them that Assange is safe they will dump the insurance files as per the plan.

That would explain the cloak and dagger (they couldn't just come out and say "tell us you're ok or we'll dump the files, aside from anything else it would make them a huge target if they admitted they held that kind of info) , the deadlines and dates and the bad moon rising/foreboding tone. It would explain the reference to a contract being made, except it is THEY who are obliged by the contract, and it would explain why they said (in one tweet) that they anticipated that everyone would "hear from wikileaks within the next seven hours" (which proved to be incorrect).
It would also explain AnonScan's reluctance to divulge information and their trepidation in releasing the information. I assume whatever they have (if i'm correct in all this) would be HUGE and they absolutely would NOT release it unless they were absolutely SURE they needed to.

I know this is perhaps a bit of a stretch, i'm maybe reaching here,, but this is all I've got after a couple of days of trawling through all this stuff....

Sorry i haven't linked all the tweets and letters etc I've referred to but i'm not really on a device that's particularly good for this kind of thing.]

AnonScan have also just retweeted wikileaks saying that julian assange has activated his twitter account with "we love this one" as the caption followed by
"And this one #rofl" which is a retweet of the julian assange message saying rumours of his death have been greatly exaggerated. In the context of what i wrote above the tone of the anonscan tweets seem to be mocking rather than celebrating... Could be reading it wrong though...
edit on 14-2-2017 by Indrasweb because: (no reason given)