Oroville dam within Quarter inch of overflowing over emergency spillway

Oroville dam emergency spillway in use for first time in history

I used to live in northern CA. Not that far north, but I feel for all of the residents in that area...

posted on Feb, 12 2017 @ 02:58 PM
link
As of this morning the water coming over the emergency spillway has filled the small "catch basin" and overtopped the access road. Looks scary, but working as intended.

You can see both the earthen emergency spillway and the damaged concrete primary spillway in the photos in the Twitter link below. Check out the erosion of the hillside at the damaged spillway and look for the construction vehicles for scale. You can't see the main dam in any of these photos, it's upriver with the power plant.

originally posted by: Shangralah
so much for the drought.

Look on the bright side, the fishing will be good once that spate starts to run off.

Interesting, that you are posting this now. Had someone point this out to me recently, about that very dam. Seems your concerns are quite on track. From the link -

Eight thousand three hundred and seventy five residents are at risk within the inundation zone. Two hundred thirty critical facilities in the city of Oroville are within the inundation zone, including; Eleven schools, twenty one day care and children service centers, fourteen elder care facilities, twenty six bridges will be lost, the airport, two fire stations, the government administration building, three law enforcement stations, the EMERGENCY OPERATIONS CENTER (brilliant) Two waste water treatment plants, the jail, and the Hospital. (from the City of Oroville local hazard mitigation plan update May, 2013) We are not talking about a river rising, where people have time to evacuate. We are talking about a wall of debris, mud, and water taking out a city, buildings, roads, bridges, life, in a horrible instant.

This guy, from what I have heard, knows his business.

The water level would have to rise another 18.5 feet (!) in order to reach the top of the dam itself, which would never happen because the emergency spillway flow (which occurs over a natural ridge made of bedrock) would handle the excess flow long before the lake level ever reached that point.:"

Evacuations are being ordered for Oroville area that
could be affected.

California Department of Water Resources officials say they expect the
emergency spillway at Oroville Dam to fail in the next 60 minutes, and ...
Mandatory Evacucuations...


I was hoping for the best, but looks like this is bad news.
edit on 12-2-2017 by burntheships because: (no reason given)

I'm praying no one gets hurt.

Everyone is picking it up now.

link
The emergency spillway suffered erosion and could fail, according to DWR. If that happens, the water behind that barrier will come down the hill and down the river.

Not looking good. Prayers going out to everyone down stream. 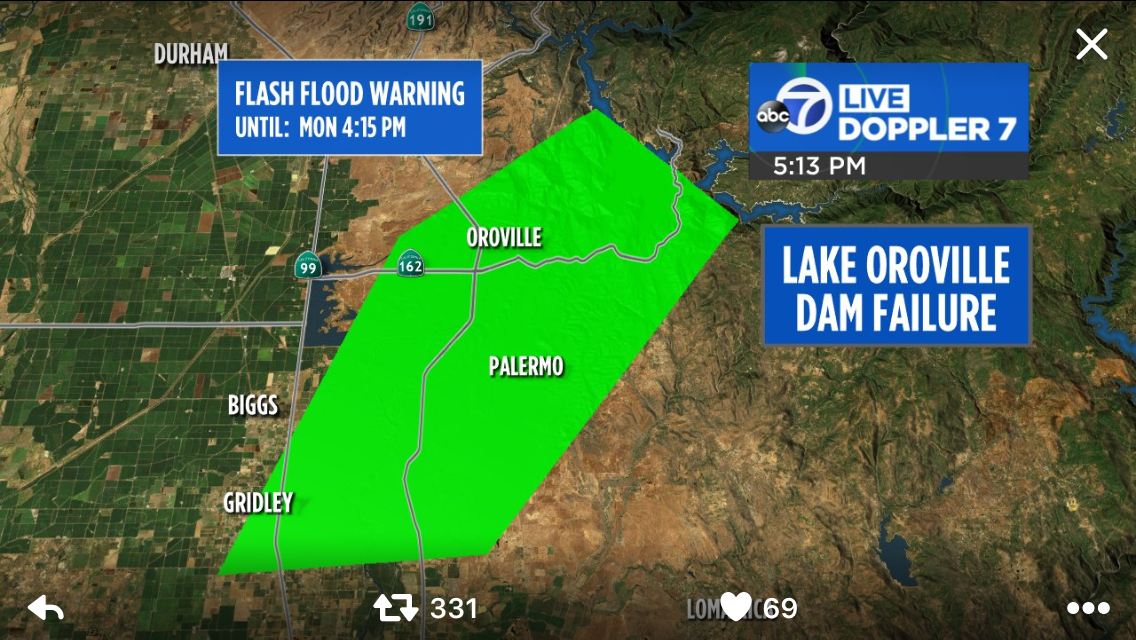 edit on 12-2-2017 by Observationalist because: Added link

That's a relief for who/what ever is below the dam.

I haven't seen anything on CNN.


Without even tuning in to CNN, one can assume that they're bashing the Trump Administration in some way. It consumes them.

posted on Feb, 12 2017 @ 08:36 PM
link
Well this changed directions quickly. Still no threat to the main dam. The erosion at the emergency spillway is not progressing as fast as they thought it was when evacuations were called. Regardless, I'm glad I'm an hour away and not immediately downstream.

The engineer to whom I linked isn't as sure as are you. There are some serious issues, and they could become worse. They don't even know, according to articles linked by others in this thread, why the current problem occurred. But, we should blindly trust that all is under control, and there is no danger? A lot of lives are at stake if it does break. How much warning would anyone receive? I used to live in a flood zone for a dam - one that NO ONE mentioned when we were looking at he house, for the record - and I know the alarm that would sound was, one, barely audible in some places it was supposed to warn, and two, if there had been a breech, wouldn't have given enough tie for us to have gotten to safety. What warning will this town have, if the worst happens?

I hope it doesn't, really, but have a bad feeling about this one. If I lived there, I'd be relocating. Given the infrastructure issues in the country, I won't ever again live in such a zone, either! Ever.

In an unprecedented move, the Butte County Sheriff’s Office issued an immediate evacuation order for residents of Oroville, in California, and nearby towns on Sunday afternoon after the development of a hazardous situation on the emergency spillway of the Oroville Dam. According to an L.A. Times report, the National Weather Service had earlier issued a warning saying that the auxiliary spillway at the Oroville Dam could fail by 5:45 p.m. local time and as a result, there could be an “uncontrolled release of flood waters from Lake Oroville.” According to Supervisor Bill Connelly, people who live in downtown Oroville, Thermalito, and Palermo, should immediately evacuate their homes and businesses and move to higher ground elsewhere. Authorities have already set up an evacuation center at the Silver Dollar Fairgrounds in Chico. Another place for people to huddle together is the RV park belonging to the Elks Lodge in Paradise

The county of Sutter’s office of emergency management also released an official statement through their Facebook page. “We have received information about the potential for increased flows in the Feather River of as much as 100,000 cubic feet per second. We are gathering as much information as possible and will be providing additional information as soon as it is verified.”

More details at the above link. Any members there, please, get to safety!! We don't want to lose you!!

Looks like another round of rainy weather coming later this week too!

posted on Feb, 12 2017 @ 11:33 PM
link
FNC is talking about this NOW - stating that the spillway seems likely to fail. Traffic gridlocked, people panicked. Talkof helicopters trying to drop in loads to stop the breach.