Liberals Want You to Die if You Disagree with Them

originally posted by: Hazardous1408
The OP reminds me of the whingers who cried when that Nazi got punched in the head, crying about his free speech.


We don't care about a Nazi's freedom of speech, bruh.

We want to drink your tears.


I've come to decide you to be one of the good ones.

I dont know what case you're talking about, but if dude wasn't physically hurting someone, wasn't intimidating someone, etc, then he should have the right to say whatever he wants. By dude I mean anybody.

And the thing is, these SJW's (the Nu-Nazi's) are like the exact polar opposites of Neo-Nazi's. So for them to to be attacking anybody on mere grounds of se them being a Neo-Nazi, etc, if dude wasn't actually getting in somebodies face and they attack him that proves they're the same ilk.
edit on 11-2-2017 by IgnoranceIsntBlisss because: (no reason given)

I didn't want either of us getting slapped by mods...

I keep missing all the threads where white nationalists are an actual mass social movement, and make it a routine to go around assaulting people etc. LIKEWISE, I haven't seen where they have a massive ubiquitous social engineering machination indoctrinating the entire nations youth into their kind.

And preventing that is paramount. It starts with you guys. You need to clean house, before your house burns down the nation.
edit on 11-2-2017 by IgnoranceIsntBlisss because: (no reason given)

Sorry bruh all I could see in your post was Nazi apologism.

A punch in the side of the head is the least they deserve.


Of course you'd have to know what a Nazi is (the lowest of the low barring paedos and rapists) to come to that conclusion.

I've come to decide you to be one of the good ones.

I hate Nazis and wish them nothing but ill health and detriment.

It's a surreal feeling, Kali.

Hey. the Nu-Nazi's can say whatever they want too, unless of course they're going to get up in peoples face, tell people what they can and cannot say, assault people, torture people, mass murder people, block ambulances, burn cities down, be the cause of a race/gender/etc war, etc.

Or would you agree that people should walk up and punch black supremacists? It's the same thing.

Sniff around Trumps cabinet and then have a look at these tools.

I could probably make a thread about some right wing moron every day too... I don't because it's low of character and intelligence to make out or believe that the entire Right are cookie cutter.

A supremacist of any colour can get a punch for all I care.


As to the rest of your post, hyperbolic nonsense to be honest.

I've yet to see a city burned to the ground.
This isn't Pompeii.

Murder/torture...
Is that a liberal thing?

I bet those people didn't even vote. Let alone adhere to any political ideology.

And the Spencer douche, his little club compares to the bulk of the entire Democrat base going off the rails with SJWFRONT madness?

Do you not realize that the SJWFRONT is hardcore Tribalist Supremacy?

(note: races, religions, party's, etc, it doesn't matter, they're all tribalist BS and they all can generate the same results as "racism")
edit on 11-2-2017 by IgnoranceIsntBlisss because: (no reason given)

Little club? Him and his ilk have wormed their way into tiny minds like yours and have convinced you that you're the victim of a war on whites, men, straight men and Christian men and propelled a tyrant to the White House.

Jesus you're such a propagandist.

Most of those cute photos are fake and biased.

You seem obsessed with SJWs.

I don't pay attention to them in the slightest.

You make them sound like a large collective.
That's far from reality.

Are you a libertarian or a leftist or a liberal?

Just because Hillary declared that any and all opponents of her, SJW's, etc are "Alt-Right" doesn't mean everyone actually follows Spencer.

That dude and his little club haven't influenced me in the slightest.

And like the SJWFRONT hasn't declared war on cis straight white men. HA! 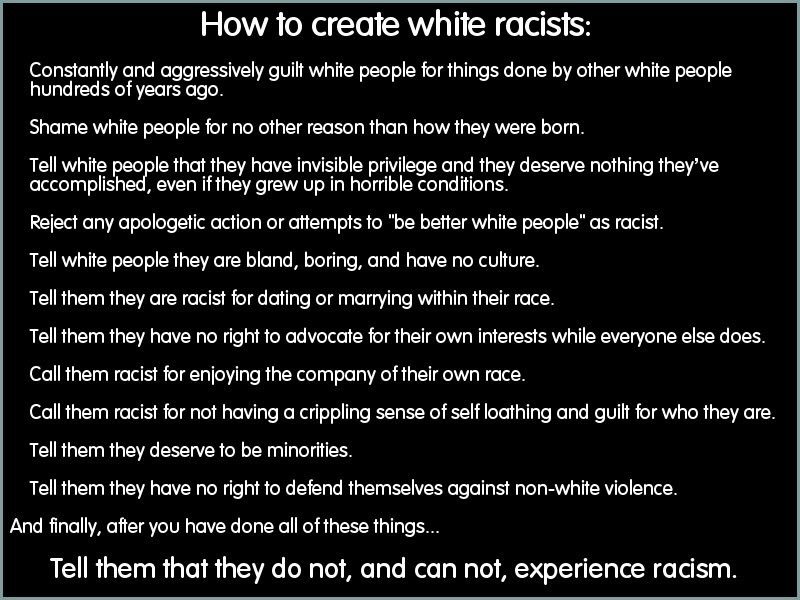 originally posted by: seasonal
a reply to: Kali74

Are you a libertarian or a leftist or a liberal?

Jesus you're such a propagandist.

The difference is I expose propaganda / social engineering / etc; I show people how to decode it while I'm about doing it. CNN would just keep you stuck on stupid (that's their job).

That how to create white racists meme...

I'd love to know the source.

I'd bet any money it comes from a racist who was racist before they were "shamed" into racism.