Ok after repeat viewing ive noticed the odd movement coincides with the movement of the camera.

Sidenote : 35 second mark I could be seeing things again but that looks like a grow to me.

originally posted by: gimcrackery
a reply to: data5091

As Zaphod alluded to, todays jet engines are said to be "High bypass" engines. What that simply means is that much more of the air that is sucked into the front of the engine bypasses the combustion chamber, and is instead compressed in order to help turn the turbo fans before that air is exited out the back of the engine.

It's important to stress that point again...:
Most of the AMBIENT MOISTURE in the air that entered the engine intake will still be there when the air is exhaust out the back of the engine because it does not go through combustion (where they air would be dried up somewhat).

A high-bypass engine STILL HAS an old-fashioned turbojet engine at its core. The difference now being that more air is sucked in (hence the larger fronts to modern engines), so a smaller percentage of that intake air is used in the turbojet.

They actually go higher than that. The GE90-115B bypasses 90% IIRC. That seems to be the current upper limit for now. If they were to take ADVENT to the civilian world they might get higher.

It looks like two airliners flying in the same direction at different altitudes, with one flying in conditions that are more conducive to producing a contrail. I see this sort of thing very frequently in the commercial air corridors above the western Mojave Desert.

originally posted by: Soylent Green Is People
a reply to: data5091

Yes! Here's a photo example of such planes:

With the size and the chase air craft maybe something being tested with some bright lights to obscure the real size and shape.

Could be that too. It's almost certainly two aircraft though.

As already posted by others this is simply two aircraft flying in the same direction with a difference in altitude. Absolutely nothing unusual in seeing only one aircraft contrail when there is a difference even of a few thousand feet. 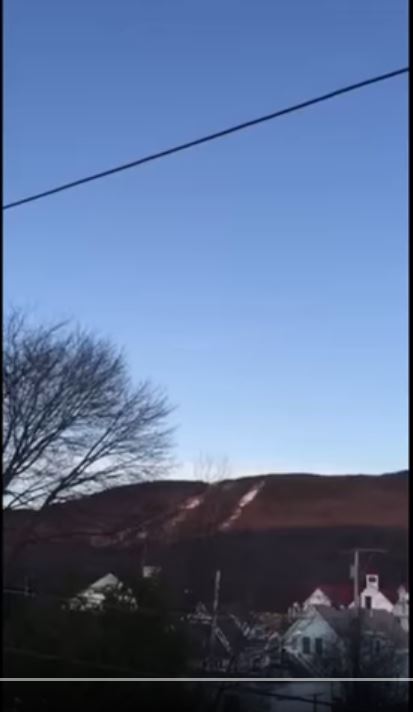 Rough location in Lincoln, New Hampshire showing the ridge. In the video the breaks in the forested slopes have snow in them. The Town Hall building is also visible. 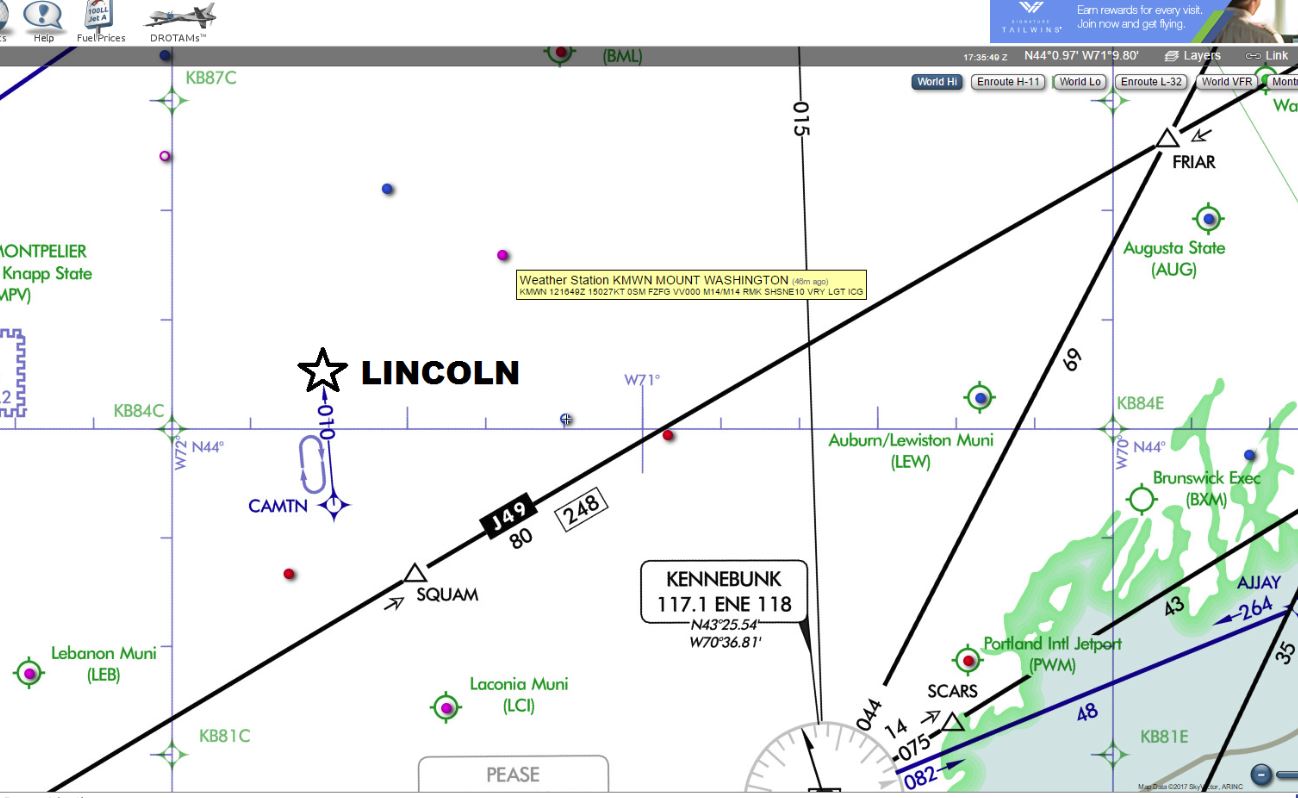 Also see navigational way points as can be seen on Skyvector.

Go to the following website. Ensure that the "World-Hi" is selected from the tab on the right and enter CAMTN in the "Flight Plan" box on the left and click "Go". It will centre the map on the way point south of Lincoln.

Screenshots of airliners using the upper air route from Planefinder. 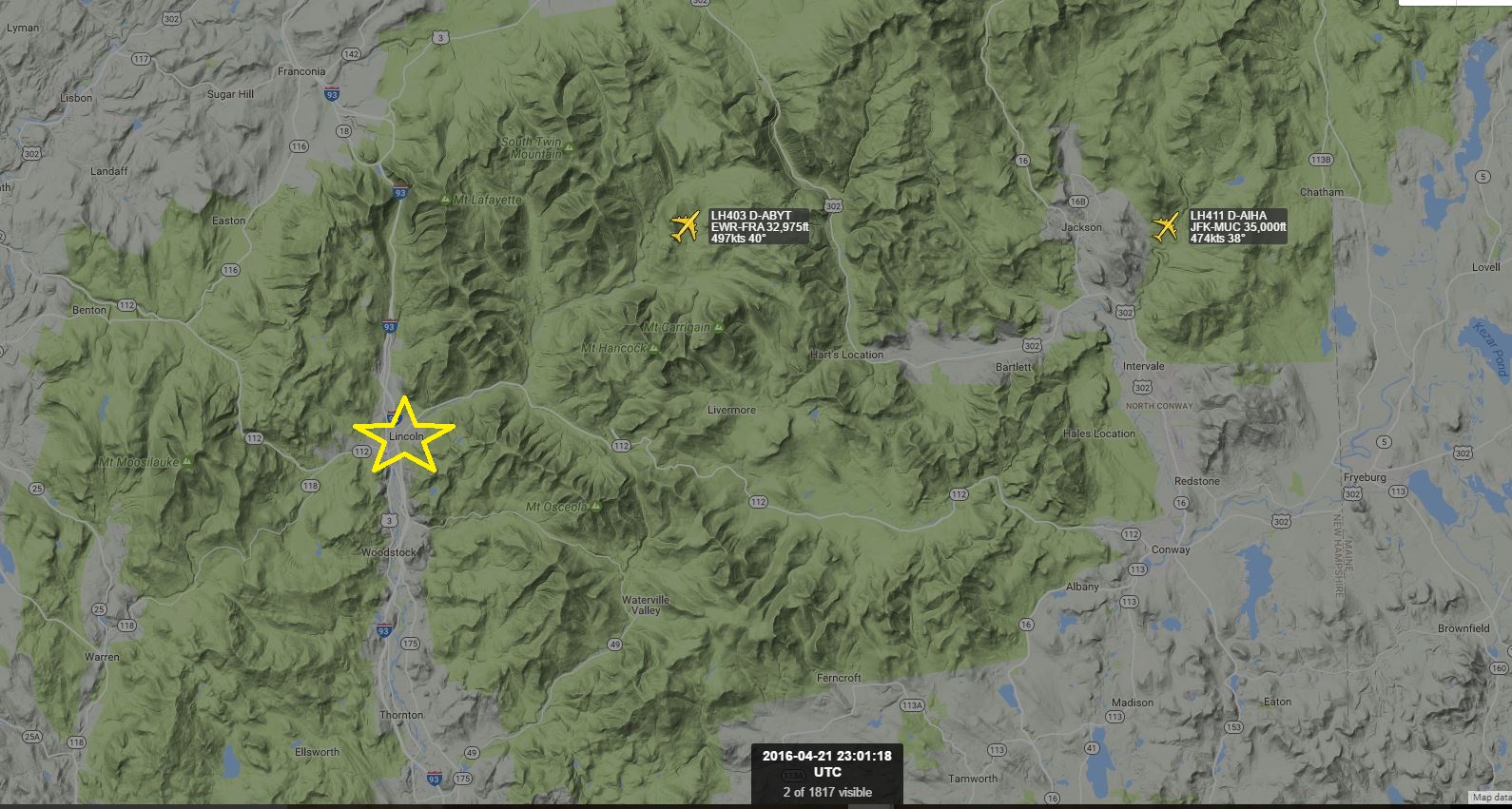 Approx 20 mins later there was another pair of aircraft, but much closer. The person doing the filming could repeat this over and over again with the amount of traffic using the upper air route. You also have to factor in the quality of the camera device used and the distance that the airliners are. Approximately 12 miles to the Boeing 747 and approximately 25 miles to the Airbus A340. 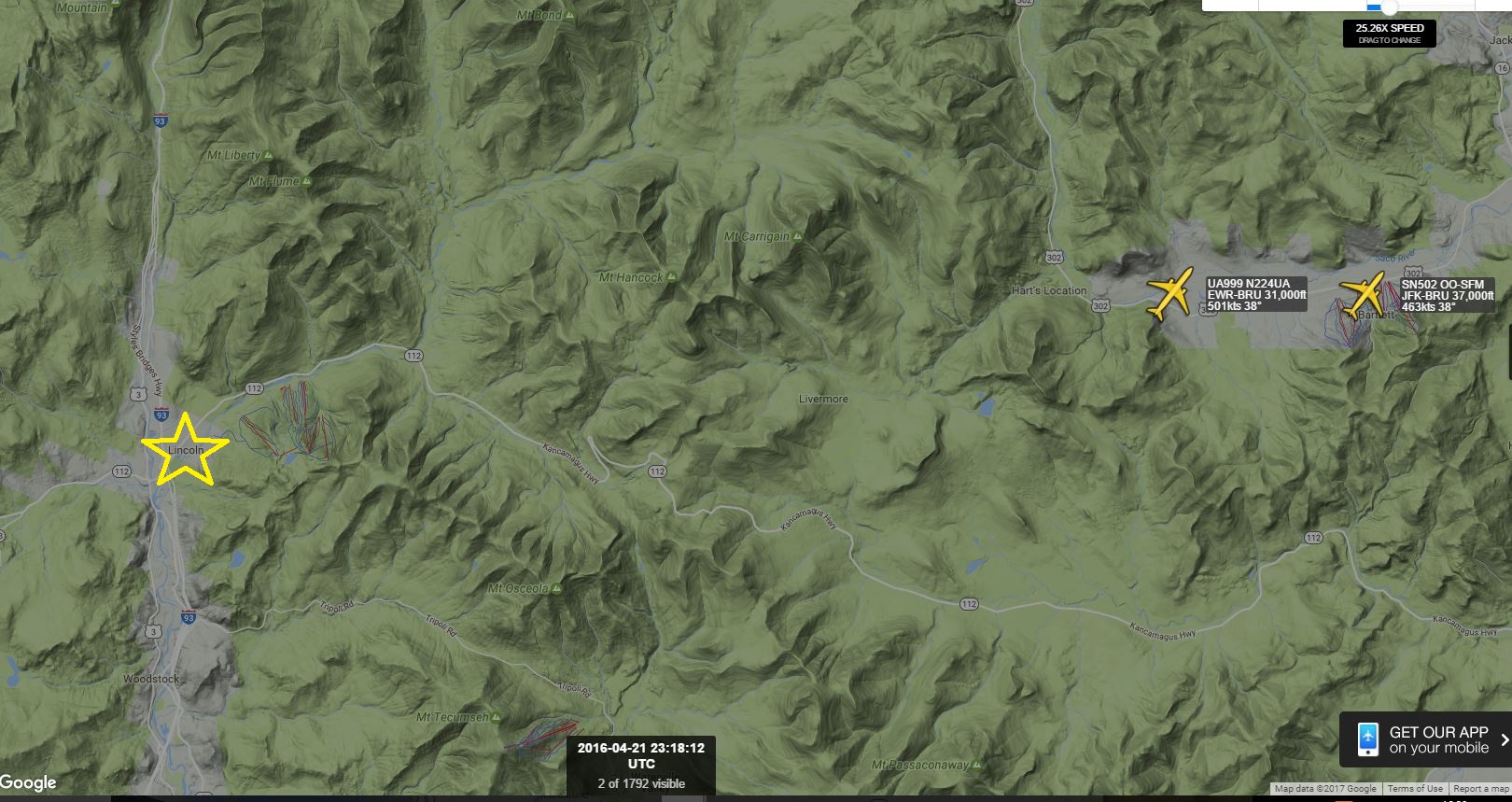 Playback of the 21st April flights can be obtained from the following link.

If the explanation was in fact one of those two scenarios, I think the first one may fit netter, because the larger-appearing plane, which was larger-appearing because it was closer, was quiet a nit larger and moving (apparent motion) faster, which makes me think it was substantially closer than the other.

I agree with the first airliner match-up. I only put in the second as an example of airliners flying close together using that busy upper air route.

There is a lot of people out there that simply don't realize just how far away a contrail can be seen. In the video the aircraft producing the contrail is higher than the other aircraft but further away. The lower to the horizon the further away the aircraft is.

How Far Away is that Contrail

Metabunk link - What is the furthest distance a contrail can seen?

That is B.S. I am an aviation expert

And yet you have no understanding of high bypass turbofans. Then you should be able to explain how an engine that bypssses as much as 90% of the air, and pushes cold damp air is NOT going to leave a contrail. Or the fact that they've proven modern turbofan engines leave contrails where older engines didn't.
edit on 2/24/2017 by Zaphod58 because: (no reason given)

Damn that science for getting in the way.

originally posted by: gimcrackery
a reply to: data5091

Today's high-bypass engines have an old-style turbofan engine at the core of it. The main difference (in broad, general terms) is that there is an extra cowling around the side of the old-style turbo fane that allows a greater amount of air in the front end that is expelled out the back end -- with most of that air not going through (i.e., bypassing) the turbofan part of the engine.

...so the new engines should be AT LEAST as capable of producing a contrail. But then add to that the fact that cooler and wetter air (the bypassed air) is being compressed and added to the stream of air coming out of that turbofan, and the result should be an increase in the capability to produce contrails.

Please explain why you say they would be less capable.

(and Zaphod, if you are reading this...you know more about these engines than I do, so correct any mistakes or oversimplifications that I may have made).


originally posted by: gimcrackery
a reply to: data5091

This mindset comes from the various chemtrail websites. It is almost a mantra chant!

Global Sky Watch High-Bypass Turbofans DO NOT Produce Contrails. So What Are Those Lines in the Sky? Link

Jack Buran a Canadian Chemtrail believer even produced this ridiculous video. No wonder the comments are disabled on it!

Of course these ridiculous claims have long since been debunked.


originally posted by: gimcrackery
a reply to: data5091

This mindset comes from the various chemtrail websites. It is almost a mantra chant! ...


...Jack Buran a Canadian Chemtrail believer even produced this ridiculous video. No wonder the comments are disabled on it!


Some of the things he says in that video are certainly ridiculous, or at the very least they are extremely uninformed.

For example, he says the following:

Going by that, it sounds as if he is under the mistaken impression that the water in a condensation trail is solely the byproduct of the combustion of the fuel. He is correct that some of the water comes from the combustion process (hydrogen in the fuel combines with oxygen during combustion, and creates water as part of the exhaust gasses)...

...HOWEVER, much more of the water present in a contrail, especially a persistent contrail, comes from latent water vapor that already exists in the ambient air through which the plane is flying. Like I said, some of the water for the contrail comes out of the combustion exhaust, BUT much of it condenses out of the air that is not combusted.

Much of the water visible in a contrail was already in that air, but in the form of invisible vapor until the plane passed through. The action of the plane and exhaust then caused the INVISIBLE vapor in that ambient air to condense into VISIBLE droplets of liquid water or frozen ice crystals.


Oh...he then goes on to point out how we mysteriously don't see contrails from helicopters. Well, that's a stupid point to make, considering that contrails form at very high altitudes (at least 25,000 feet -- but usually 30,0000 to 37,000 feet), and helicopters usually fly at only around 10,000 to 12,000 feet maximum -- usually lower (around 5000 feet or less). There are some exceptions with more extreme helicopters that can fly higher, but almost all commercial helicopters do not have pressurized cabins, which is one limiting factor in how high one can fly.

However, to bring up that helicopters mysteriously don't make contrails is either ignorance on his part, or just straight out intentional misinformation (i.e., outright lies).