More Adventures With My Chickens.....

Twice a year, chickens will moult and loose feather, growing new ones. They do this during the spring and fall. Most times when they do this (beside looking rather scary looking) they will drop in their egg production, even stopping all together.

This past fall, my girls started their moulting and stopped laying, but once they were done, they never went back to laying. All winter I've had no eggs from them, which was unusual, and I started to think that they were done. Chickens will only lay eggs for a finite amount of time (around 5 or 6 years). My birds were only 3 years old so it was puzzling.

The feed store ran out of my favorite layered pellets I give them (22% protein) and were not expecting a new shipment of over a month. So I took to feeding them dried cat food.

The dried cat food is chock full of protein and the chickens love it. The main reason you do not feed them this all the time is: Cost. Cat food cost a LOT more than chicken feed. 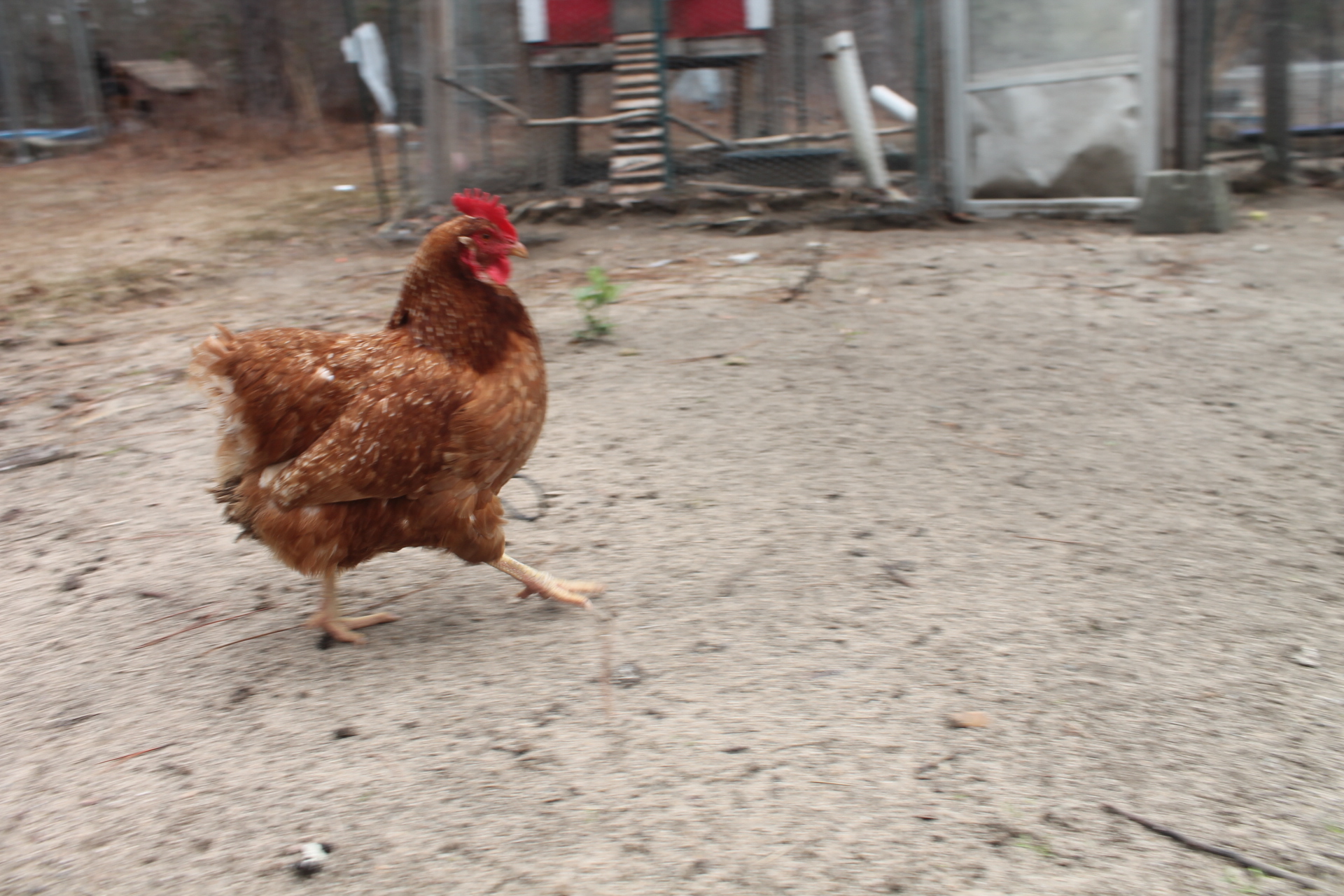 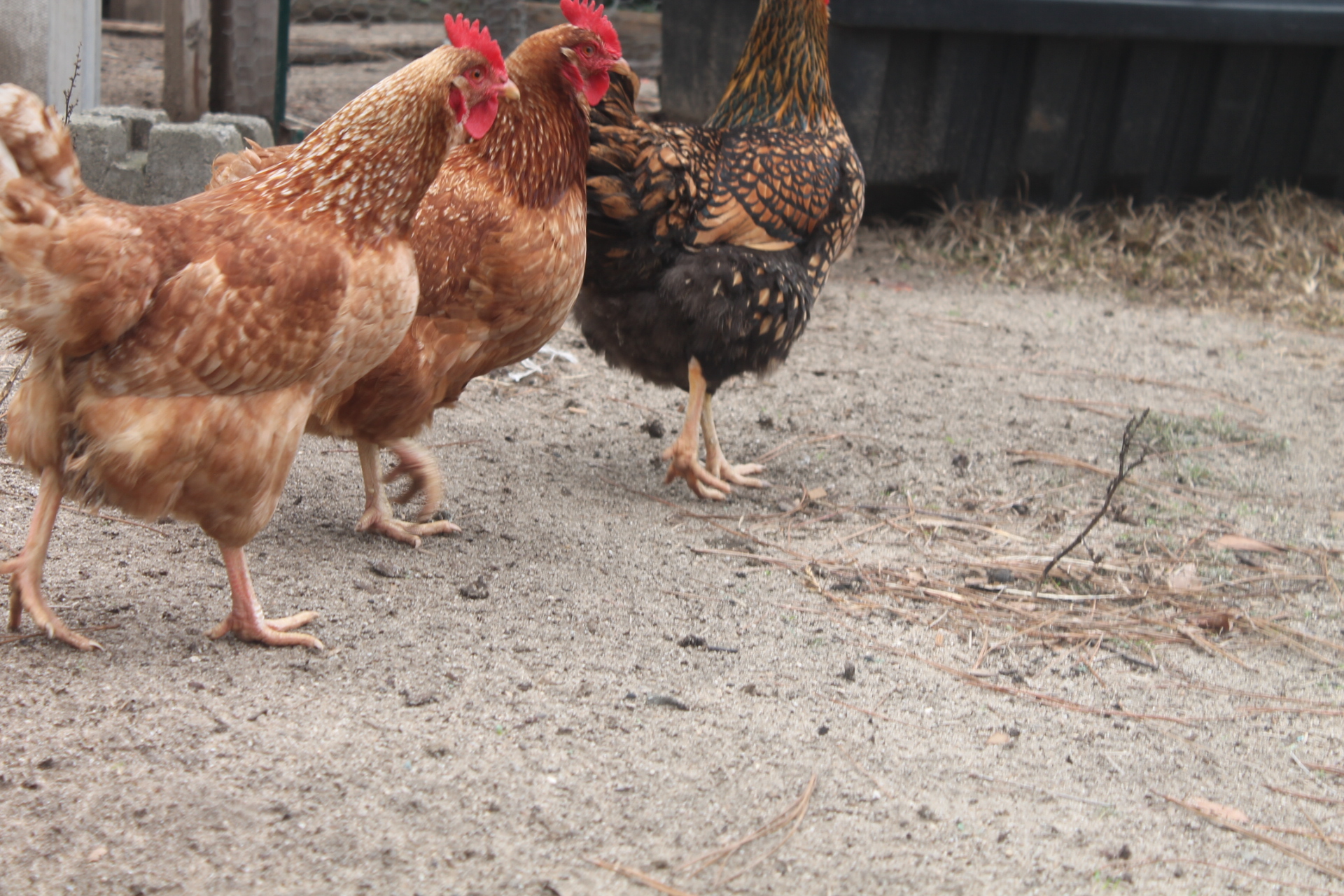 I was also hoping it might boost them into egg laying again, because I really could not understand why they were not laying anymore. They are just too young to no longer be laying.

Weeellllll, turns out they were hiding the eggs from me. Which is funny because they do not brood (sit on) their eggs. These are Cinnamon Queens (colored sex linked) and Golden Laced Wyandottes. They don't brood. You want chicks, you have to get the eggs quick and keep them under a heat lamp yourself.

But yesterday, as we were getting ready to go into town, my wife noticed one of the hens coming out of our wild black berry patch, and sure enough, she saw a pile of eggs there!

I took this picture this morning: 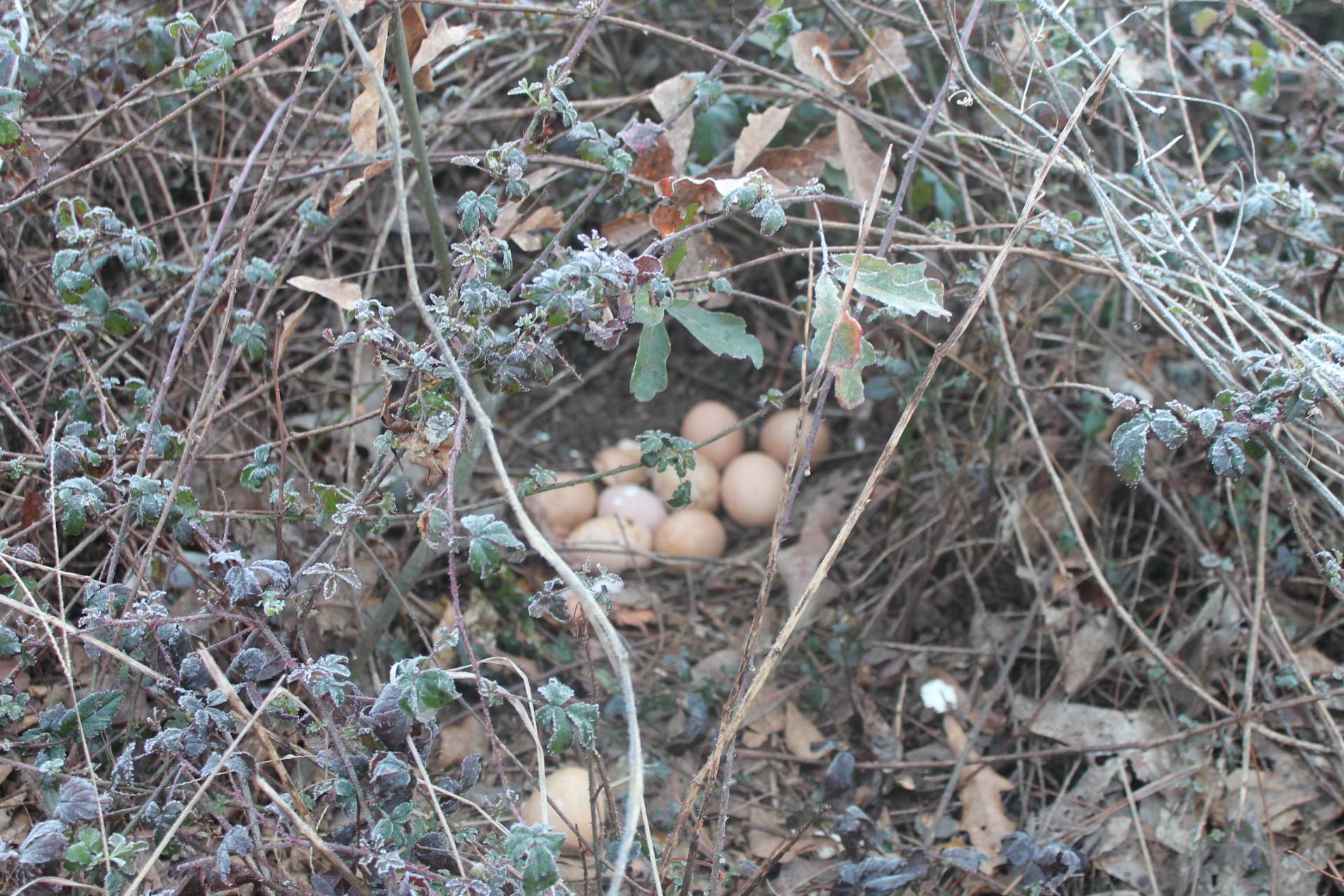 There were 3 other places in that patch they were laying the eggs. Getting them out is NOT fun. The thorns on the black berries SUCK.

Our rooster, Nugget was not happy with me messing with the eggs: 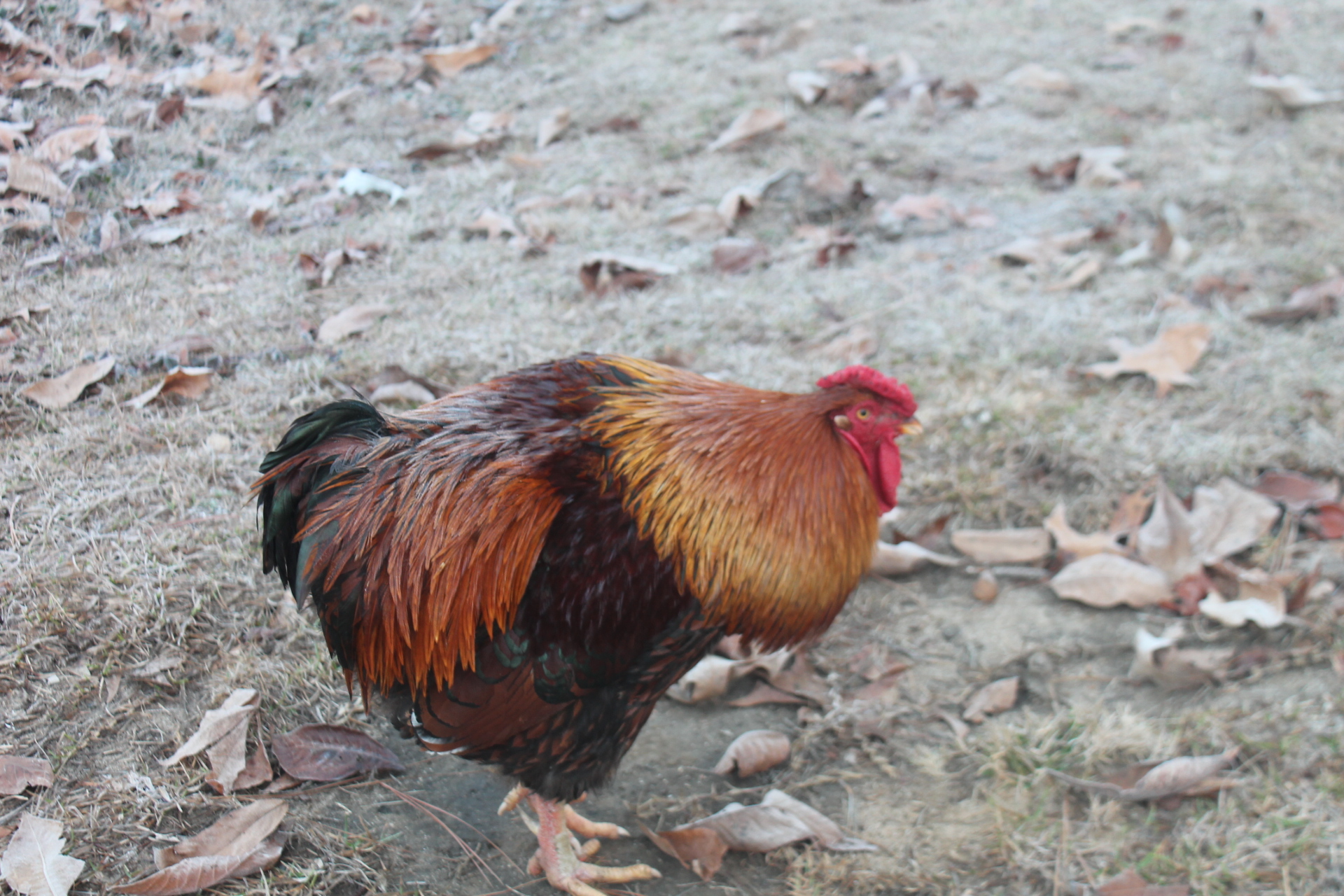 He's got some VERY long and sharp spurs, and he came at me: 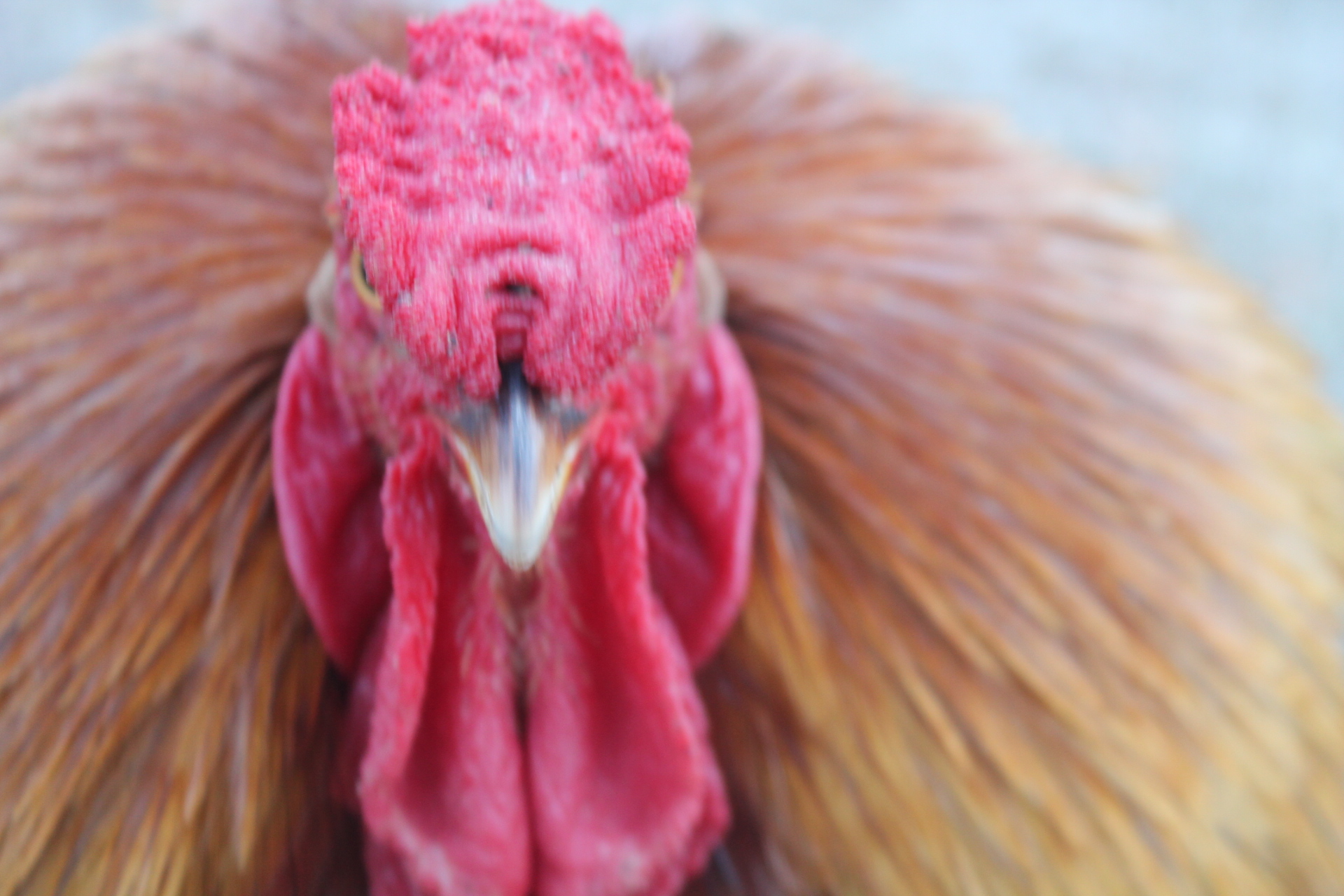 I had to remind him that I'm a lot bigger than him, still he wasn't about to back down, hehehe.

Anyways, got the eggs inside now, cleaned up and now I need to water test them (bad eggs float, good eggs don't), as I don't know how long some of these have been sitting out there. 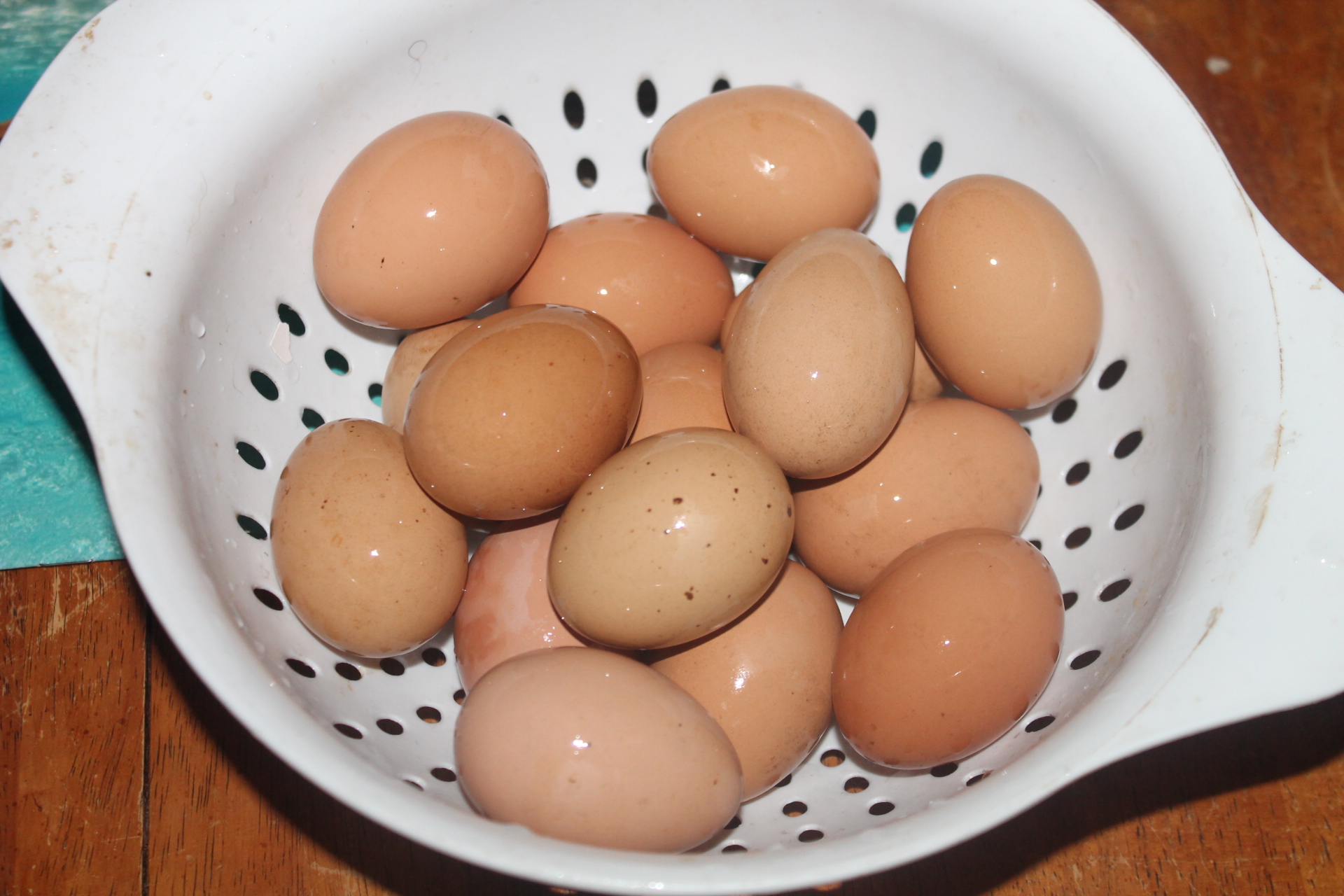 But at least now I know where they've been hiding the eggs and can keep an eye out for more.......unless they decided to find a new place to hide them........sigh.

I saw an odd post on Facebook recently about feeding chickens yogurt to improve egg production, will try to find that.


as I don't know how long some of these have been sitting out there.

They should be fine.

When chickens lay their eggs, they are coated with a layer of bacteria that seals them. I have a couple Appenzellers and a few silkies. Alot of times I just sit mine on the kitchen cabinet in a dish and use them from there.

Of course they bleach that layer off to make the eggs look pretty for store shoppers.

It's a myth, and not a very good idea to give it to your chickens. Chickens do not have the proper enzymes in their stomachs to digest milk sugars, and the bacteria that is in yogurt that does help chickens is not in enough store bought yogurt to help them. It's a waste of money, and in fact, you're spending a lot of money to give your chickens diarrhea, with little to no boost in egg production.

This is why I tend to ignore stuff like this posted on FB, hehehehe.

Protein, calcium and fresh water. Those are the best things in the world to give your chickens for not only good health, but good egg production.

So giving chickens milk based products like cheese or yogurt can be a bad thing to do.

They can eat just about any veggie though, and love it. Meal worms is another favorite. I've given them frozen watermellon during the summer, the tear into that like no tomorrow.

There is another myth that they can't eat potato skins or onions: that's rubbish. They can eat them just fine.

I read the title and thought this thread would be gone before i could respond.

I have a twisted mind.

I had some this past summer that sat out in the summer heat for weeks........cracking them open?

And some of them passed the water test! So if I find them outside the hen house and I don't know how long they've been there, I crack them into a bowl first.

There is no describing the smell of a puss filled egg cracked open over a hot frying pan.........


Just got up, waiting for my coffee, sinus draining and then I read that. Almost had to run for the bathroom!

lol in reference to the puss filled eggs....

posted on Feb, 10 2017 @ 08:40 AM
link
You can take a 'coping' saw or 'hacksaw' and cut off the spurs making them blunt rather than spikes. Where the spike starts to become smaller in diameter, about half way the length of the spur.

And yea they will be fine, no harm.

I saw an odd post on Facebook recently about feeding chickens yogurt to improve egg production, will try to find that.

I am sure it is meant to improve the calcified shell coating....maybe throw in some blueberries while you are at it

posted on Feb, 10 2017 @ 08:50 AM
link
a reply to: Plotus
If you cut a small nitch in the spur closer to the skin before cutting it off it will help with bleeding. Or use chalk to stop the bleeding.

Get rid of those spurs! So you think the hens are plotting their new hiding spot? LOL

Thanks for the story, I enjoyed it with my morning coffee this morning.

What is the upkeep like for chickens? Are they more so pets, or food sources to you? I will be moving myself to a more "off-grid" living situation in the next couple years after I learn a couple more trades. Chickens are a definite necessity for that (IMO), along with fertile area. Granted I will be going off-grid in luxury, but once done I plan on having zero income other than barter. That's a main reason I'm schooling myself in air conditioning and auto mechanics before I pursue the endeavor. Nature wise, I'm fairly savvy. I can hunt, fish, gut/clean, cook about anything.

Thanks for sharing the story, them clever chickens.

How dastardly to steal their brood, even from their hidden nest?

You shall be pecked to death in their dreams...

Maybe let them raise a brood for once? Might restore their faith in their future as chickens, reassuring them some of their offspring will survive the current genocide? This could lead to a flurry of egg laying.

You need to be removing the fresh laid eggs everyday from the field...first thing in the morning. It is either that or you build a nesting shelter for the chickens so that they can maybe hatch the eggs. You cannot have both.

My mom has chickens too...and there is a large shade area for them but one thing is for sure, those chickens lay eggs inside and are picked first thing in the morning the next day.

While I have no issues taking down a deer for food, having to slaughter an animal that I've raised and taken care of and even named is a bit of a hard pill for me to swallow.

In many ways they are also pets. I sit outside and they come up to me like any dog or cat would.

Taking care of them is actually easy (depending on the numbers: the more you have, the harder and more expensive it gets). A 50 pound bag of 22% protein layered pellets costs me $12.50 and easily lasts me 2 weeks with my 8 birds. The harder part is maintaining a clean hen house and run: Chickens poop.....A LOT and EVERYWHERE, hehehehehe.

posted on Feb, 10 2017 @ 09:06 AM
link
Used to work at a farm and ranch store, alot of chicken "tenders" as we called them bought high protein dog food which apparently results in alot of double yolk eggs.

You can use the chicken manure in veggie gardens

Just to give you an idea of the size they lay, check out the one next to the can of soda, hehehe: 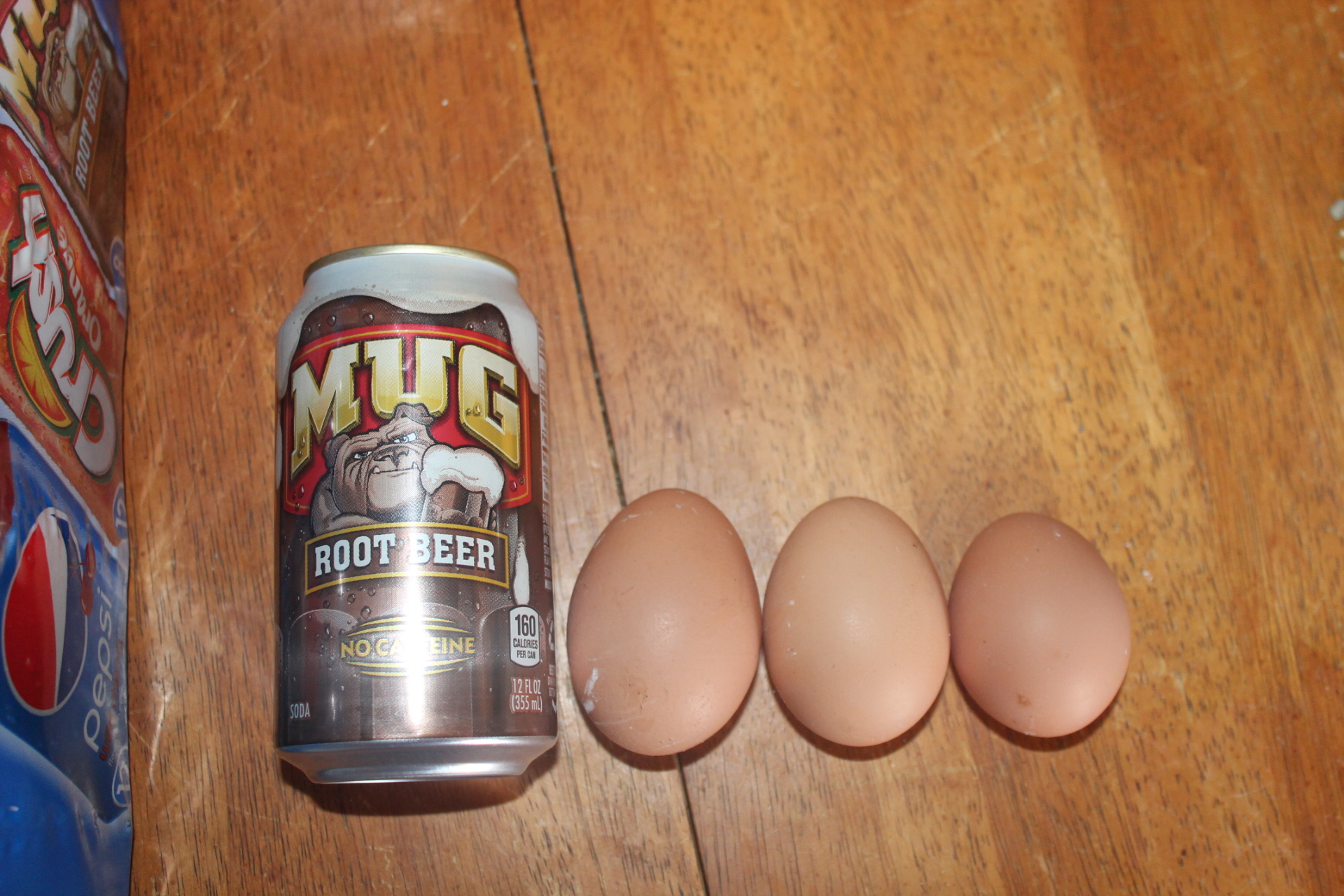 But, yours are some fine looking birds!!!!!

I do know that I give the wild birds dried mealworms at certain times of the year....mostly when they are feeding their young.
Especially the robins who come to the feeders with their fledglings.
Also if the weather is particularly cold.

And, look out for Nugget

posted on Feb, 10 2017 @ 12:50 PM
link
We live pretty far north (I can hit the Canadian border with a 3-wood...); we add red pepper flakes and sunflower seed to their feed. We have very little drop off in egg production when we do that, at least with our chickens. Our ducks take the winter off, it seems...

I can't wait until spring... there is nothing like having fresh duck eggs for breakfast.