Punk rock has always had an insight. We hate you all. We just hate some less than others. And you call us the uneducated ones.

He is right in a way I guess , because according to him only fake news can call each other fake news simce they started that sh1t although it blew up in their face. Lol

So i guess we will have to clarify from now on and say no i didnt say it was fake news it said faka news with 'a'.

I love how every one of the lefts typical shame tactic have blown up in their face or no longer work.

Such as: Racism,sexism , deplorable,alt what ever, fake news, denial about publics interest in scandals, etc.

No wonder the epic butt hurt from the left and the msm they have become impotent due to the cry wolf syndrome and hypocrisy.

posted on Feb, 10 2017 @ 08:40 AM
link
The term ake news is a psyop, that if you look at the Google trends came out just when a certain subject that must not be named started to pick up steam.

The thing is these people are victims of mind control and being under control like that will make you come off as pretty freaking retarded. See wolf Blitzer on jeaopardy.

Grow up and report the news, not your opinions

To borrow a thought from Joe Rogan, you cannot say that "fake news" is equivalent to the "n-word" because even the person making the comparison is willing to say one of those two terms, but not the other. It seems pretty logical to me that the word you won't even say out loud for comparison purposes is by definition more offensive than the one you and everyone else feels free to utter. [Joe made this point in regard to the term "midget" but the logic still holds I think.]
edit on 10-2-2017 by Slave2theTruth because: (no reason given) 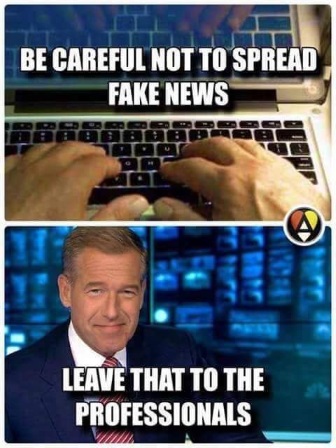 "We're gonna dig a hole, a great hole. A hole right to China. We'll call it the great hole of China. It will be great. On the way you can stop by the earth's core, and maybe even Australia"

As reported by a cnn 'source'

mm...no... I can't really see the comparison between that and the N-word myself... like others say, just keep digging that big ol hole of yours, MSM!

Consider, someone uses the N-Word to disparage someone because of the color of their skin. Something they cannot change. They are born that way and have zero control over it.

The MSM can stop being fake news though. They just have to stop manipulating facts, attributing made up stories to fictitious or unnamed sources and generally no longer lying.

Saying fake news is equivalent to the N-Word is saying that fake news cannot be changed. They have no control over it. They were born that way.

You can't blame CNN for reporting on something they believe to be the truth.

You need to blame their sources. Or whom ever is doing the actual journalism.

I remember when I was interviewed a few years ago about a criminal I captured in the back of my taxi. It was someone who punched a girl, after he broke out her car window. I was asked by the fox news reporter a very basic question: what is it like being a hero?

Well that is such a bull# question.

So I answered: I'm not a hero. I honestly don't care. I was more mad about him bleeding in my #ing cab.

But the news reporter from the local news paper asked me a much better question. Which pertained to the details of the story.

Apparently the news casts are more about one liners than actual stories.

Of course at that time a cab driver in our same group had the best story. He just so happened to see a police officer chasing a suspect, and the officer asked for him to tackle the suspect. And so he did. A 60 year old 90 pound man tackled a 6 foot nothing 190 pound person... against a store window.

Yeah. He had all the glory because his story spoke for itself.

I caught a mother ducked in my cab who had fled the scene, and then decided to complete his getaway in my cab.... all the while bleeding out his right arm. Yeah... the best part about my story? Before the cops discovered the girl at the restaurant parking lot, the cops had already arrived at the suspects hotel room, asking him questions.

Thank you for the thread.

CNN host is so desprete in defending his career and CNN journalists, that he made a fool out of himself.

I agree, Fake News is a bias, properganda, operation strictly to doop their viewers into believing lies.

I have been telling people for over 13 years to shut that garbage off, many people just laugh, called me a conspiracy theorist.

They are not laughing now.

Thanks to Donald Trump calling them out during the election, people started to wake up.

Another reason why the establishment hates Trump, because he had the balls to call them out, and provided the evidence that they are liars.

The American people do not trust mainstream media and the polls prove it.
edit on 11-2-2017 by Informer1958 because: (no reason given)

CNN will take a real story, spin it in a fashion that's Anti-Trump, and then focus hours and hours on their FAKE creation. They find "experts" with no integrity who accept peanuts, or free publicity, to support CNN's FAKE creation.


The "N" word is slang. "FAKE" is an accurate/real assessment of what CNN delivers. The Trump administration will bury networks that do what CNN does... with CNN leading the way to the grave yard.

posted on Feb, 11 2017 @ 06:38 PM
link
Of course it's racism.
First rule of ctrl-left club is you establish your oppression level.
The lower the better.
Therefore your outrageous actions become acceptable.
Like lighting a dumpster on fire over a president in an election you didn't even vote in.

Alex: A strong push began in 2015, 2016 and early 2017, to skew, embellish, and outright misrepresent facts especially at this well-known media network.

Contestant: Who is CNN?

They are going to forever be known as either CrookedNewsNetwork, ClintonNewsNetwork, or CartoonNoosNetwork. Many of their anchors will forever be considered fakers. They have lost too much credibility, but unfortunately most basic cable packages only offer CNN. You have to pay to receive real news. Basic only offers fake news.

I've noticed that on my COMCAST cable system, CNN is right next to the popular ESPN. During an ESPN commercial, you can go down one channel and see what CNN is reporting.

Also, I-Phones are producing CNN news pop-ups, unless they are manually disabled. My wife thinks President Trump has accomplished nothing, because AT LEAST once per day, CNN pops up on her I-Phone to say something negative about him, or his administration. Is APPLE a Liberal company? If so, why? President Trump is PRO Business.

If you have an iPhone, you can set your news choices. CNN is probably the default. Get rid of it! It's Fake News!


During an ESPN commercial, you can go down one channel and see what CNN is reporting.

You must resist! Resistance IS NOT futile!
edit on 11-2-2017 by queenofswords because: (no reason given)


Didn't CNN warn people that they could go to jail for reading Wiki-leaks? That was priceless!