Cuomo did try to back track, but stupid is as stupid does!

Seems to me that if CNN didn't like being called fake news they might just try some honesty in journalism. Wouldn't that be refreshing?

Hey Chris Cuomo, you are a FAKE journalist working for a FAKE news company!

If you are a convicted felon it tends to follow you until the day you die.. Why would CNN expect people to forgive and forget about their bias reporting and fake news ? They made their bed now let them lay in their own crap. The day they are no more I will not shed a tear much less think..... sorry.

Racist, antisemite, bigot, misogyte, deplorable, facist, nazi... List is long when CNN gets to pick the suitable words for characterizing those who have the audaciity to call CNN fake news, or vote for Trump....

Well, they do love to play the victim. Look at the reporter who was rude as hell to Trump, then CNN portrayed him as a hero for it.

That is worthy of a backtrack...maybe even an apology.

That's actually a remark that should see someone becoming unemployed. Give him credit for immediately recognizing the utter stupidity of it, but not enough, were I his boss, to save his job. Don't care who his father is.

I couldn't agree more it is like they are digging their own grave.

When will the media realize they need to leave their bias at home, and report the truth?


According to Nielsen ratings data compiled by TV Newser, Fox News’ overall viewership indeed grew in the month following the election, while both MSNBC and CNN saw their ratings dip. In the key 25-54-year-old demographic for the primetime hours, however, all three networks saw their audience shrink, although the losses for CNN (-47%) and MSNBC (-42%) were proportionally much larger than that of Fox News (-2%).

There's always been bias in the media. From the invention of the printing press and before that. It is a human invention after all.

Admittedly it seems to be worse now then before, but I suspect that's because there are more sources for information then ever before.

"Fake News" How does one go about defining fake news? News we don't necessarily agree with that doesn't fit our own biases? I suspect for most folks that about describes it.

All media is biased. It's the indisputable nature of the beast, all you can do is use as many sources as possible.

I think that cnn would be down to their last viewer before they saw any light in that regard...

They can't help themselves...it's who they are...They couldn't pick up the mantle of reporting without agenda and opinion if someone held a gun to their collective heads...

If they merely reported the news...it would take a few minutes to lay out the facts...How then could they face the whole day without relevance...

Think about it...there would be no media personalities or stars...in your face 24/7...IF...they merely reported the facts...
Instead they twist and spin everything into a story...every simple job...then becomes a project...and a projection of them and their personalities into our daily routine...

Doesn't everyone have their fave news anchor...?


Admittedly it seems to be worse now then before, but I suspect that's because there are more sources for information then ever before.


I have to respectfully disagree here. There are as many sources now as before, however, the narrative has changed.

With Obama the big thing was the birther issue, and that was about it. Nothing else was ever made an issue. Hell, I know you remember "we have to pass it to see what's in it". Imagine if Trump tried something like that.

It's a political witch hunt from the left seeking out any and every flaw possible, regardless of it being correct or not. That is literally where the fake news term came from (IMO).

As far as the media, yep, it has. I used to love VICE news, nowadays? Effing political hack site. That was my one bastion of unbiased news. Oh guess who owns them? Bill Maher.


PS I know you aren't a Trump hater and this was in no way an attack, rather an opinion.

The funny thing is there is a lesson to be learned here,lying and cheating might work with some fools,but the ones who look further then the end of their nose,can see thru the panderist lies the liberal's tried to push,they killed themselves

Not yet but they ARE bleeding out ... maybe there is a doctor in the house...?.. but maybe there is not ? Never underestimate their resilience or their investors/advertisers.

originally posted by: CynConcepts
a reply to: YouSir

Ummm...I bolded the two most important words in your post...You see...Less division would be diametrically opposed to their divisive agenda...
These idiots are hell bent on driving wedges...it's all according to their strategy...by their I mean the masters behind these clown puppets...They're WAY too shallow to come up with this agenda on their own...

Black Lives Matter hasn't heard about this story, I guess?

Imagine those white devils at CNN co-opting the N-word for their own whining!

posted on Feb, 10 2017 @ 07:36 AM
link
Seriously? They didn't mind pushing divisive news to have Trump supporters randomly attacked in the streets by brainwashed liberals. They didn't mind labeling us all as racists, bigots, or whatever else they decide to make up. The worse part about it is that it was all fake news that caused all the outrage from the left and they are directly responsible for a lot of it. I hope they get a huge dose of karma eventually. Lower ratings and less viewership just doesn't cut it for me. I hope they lose their jobs.

That's what bias of any sort is for...it's an attempt to move thinking/acting in a direction beneficial to your needs.

My humble opinion, of course. Or bias? 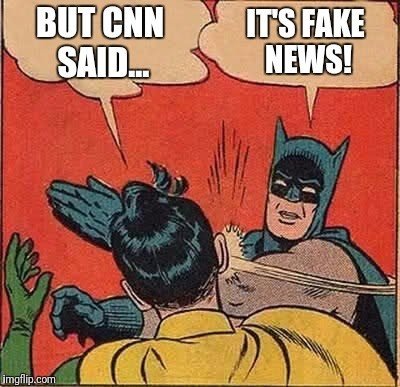