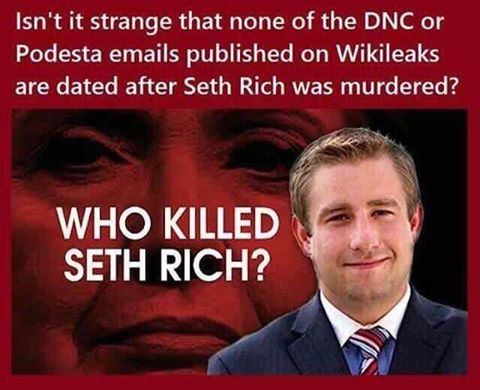 Just let that sink in for a minute...


I mean, how much more circumstantial evidence is needed before people put two and two together?

I am thoroughly convinced Seth Rich leaked the DNC emails to Wikileaks and was murdered by people affiliated with the Clintons, Podesta and the DNC. There is not a doubt in my mind.


But the big question is why?

By most accounts (such as half the people on these forums and the entirety of MSM) there isn't anything incriminating or damaging in the emails, right?

So why would leaking a bunch of harmless emails merit a death sentence?

I think if we can answer that, we'll come to a much greater understanding of the greater issue...

In short to maybe send a message ... hard call without more data .not surprising considering some of the gang he found himself around .

But seriously... leaking a bunch of emails about pizza parties, house parties, "very complicated video pieces",chicken sacrifices.... If that's a death sentence, I'd hate to see what leaking something real would sentence them to...

The fat lady may not have sung just yet on this one though . Think about it and the amount of influence that gang has had on the justice system . Chances are that if someone has the goods on it then they probably would have wasted their time trying to get it to trial let alone a conviction . The justice system was and is in need of repair . Lets hope Trumps team can make it work then let the hammers fall .
edit on 9-2-2017 by the2ofusr1 because: (no reason given)

posted on Feb, 9 2017 @ 10:26 PM
link
Well, it's an oddity that so many associated with the Clintons turn up dead under rather mysterious circumstances. I have no delusion of thinking I KNOW for a fact that something shady is going on, but there sure as hell seems to be a lot of room for suspicion.
As to why he would have been killed, that's not nearly as difficult to suppose as you might think. Political parties, the politician aside, generally do not like leaks that leave them vulnerable to public scrutiny. Also, the political atmosphere in this country is of such a tense nature that any questioning of an established political party is viewed as a threat to said status quo. Let's be frank, what the leaks revealed definitely leaves room for questioning the motives of an established political party. So.... Connect the dots.
edit on 9-2-2017 by SpeakerofTruth because: (no reason given)

Only his watch strap was torn, nothing else missing...

That doesn't speak of a robbery, gang related or even a senseless act.

2 shots to the back is either " he knew them and didn't want to hear what they were saying " or " it was a stranger who passed him and shot as he walked home.

That whole shooting was very suspect, I hear of the shootings in Baltimore and DC nightly, it's either drug, gang, personal or bystander for the most part.

"There had been a struggle. His hands were bruised, his knees are bruised, his face is bruised, and yet he had two shots to his back, and yet they never took anything...They didn't finish robbing him, they just took his life."

This seems like he was being ruffed up and scared into being quiet, maybe he didn't give in.


Rewards for information The Metropolitan Police Department (MPDC) posted its customary reward of $25,000 for information about the death.[2] In August, WikiLeaks offered a $20,000 reward for information leading to a conviction;[2][19] Rich's family said that they were unable to verify this reward offer.[20] Republican lobbyist Jack Burkman has offered an additional $105,000.

This struck me as interesting, 105k he was willing to put up, knowing he'd not have to pay out, because the " shooter " was a professional or already taken care of.
edit on 9-2-2017 by Tranceopticalinclined because: (no reason given)

And that alone should merit a thorough investigation.

I think he was robbed of a thumb drive or some sort of data he had with him and then was murdered to keep him quiet.

Thats very plausible .But if he was the one that gave the info to wikileaks then why would he be carrying around a thumb drive ? Unless he had more data .

Yeah at the time I never bought that it was some random murder or robbery.

Love the quotes in your signature.

If I recall he was shot near the doorway to the Russian embassy. It has been theorized he was going there to seek asylum. It is highly probable that he had enough information in his head to make him a threat without a thumb drive. Maybe, if there was a thumb drive, it might have contained some more serious, life insurance type files. Maybe the CF people had the foresight to realize that someday there could be a hostile DOJ. They didn't want Seth Rich resurfacing later to testify.

I hope Seth's name is memorialized one day. If this is as big as many people strongly believe, he will be remembered as the one who broke it. He may be a hero... He can't be forgotten.

Another surprising dot .with a makes sense plausibility

posted on Feb, 10 2017 @ 02:05 AM
link
Those emails are super incriminating. Whether code for drugs or peadophilia there's definitely code covering illegal activity.

Oh wait I just questioned the emails. That's not allowed.

posted on Feb, 10 2017 @ 06:51 AM
link
Just wanted to drop this kind of related vid by James Corbett on the Oklahoma City Bombing and the Suicided: Terrance Yeakey

do we know what caliber was used and if a suppressor was used?
I haven't looked to far into this, but my gut feeling is you are right.