posted on Feb, 9 2017 @ 06:36 PM
link
Three E-2Cs that were scheduled to deploy aboard the George Bush late last month had to undergo engine changes just before the ship sailed. Two days before the ship sailed, the three aircraft were found to have had the wrong oil installed in their engines, causing both engines to require changing. Initial estimates are the damage is $2M, but that may come down when they tear the engines down and find the extent of the damage.

The Navy is currently in crisis mode, with half of their aircraft grounded for maintenance related problems. The Vice CNO told Congress on Tuesday that readiness levels are the lowest they've been in many years, caused by sustained deployments and funding uncertainties have caused aircraft to be postponed from going into the depot, and pushed unit level maintenance back.

Days before the aircraft carrier USS George H.W. Bush set out from Norfolk last month, the Navy had to scramble to fix a major problem with the ship's squadron of early warning, command and control aircraft.

The engines on three of the squadron's four E-2C Hawkeyes had been damaged and needed to be replaced.

The wrong oil was used in each $80 million, twin-engine turboprop aircraft.

The Navy is currently in crisis mode, with half of their aircraft grounded for maintenance related problems. The Vice CNO told Congress on Tuesday that readiness levels are the lowest they've been in many years, caused by sustained deployments and funding uncertainties have caused aircraft to be postponed from going into the depot, and pushed unit level maintenance back.

While this is obviously real, we hear a lot of this from all of the armed forces. Is this their way of using shock and awe to get a bigger slice of the budget.

To put it another way, when budgets are slashed, does not the Navy have a choice on where money goes? Could they not have saved money on new initiatives and done the maintenance?

It seems like a parent who buys booze instead of buying food for the kids.

Yea we hear it a lot
"Omg we messed up america won't be safe!!!"

I had to take half a day off recently to fix my wife's breaks and bypass my heater core. ... sucks to be me but my sh! still drives and I don't have to have a new engine cuz I cared and it WAS my problem...

No sympathy. Too simplistic? Maybe... maybe they should have e better mechanics. .. just sayin.... gtf over it and stop milking money when u already ha e trillions.

There's been quite a bit of cost cutting in all the services, but it's been done poorly. They're kind of in a cleft stick right now. All their equipment, especially aircraft are getting older and worn out, but there are more missions to cover. The Navy,other than the Ford and Virginia, both of which were well underway when sequestration hit, has been fairly low key on the new programs. They've been going the upgrade route, which doesn't cost as much, and concentrating on the carriers, which suck huge amounts of money from the maintenance budget.

What "trillions"? The budget request for this year was $582.7B for the DoD. Well over half of that goes to base upkeep, pay, and fuel.

Shortly before I got to my Coast Guard Air Station someone left a C-130 engine on a rack left UNCHOCKED during lunch. It rolled down the ramp, across the main base road and into the Pasquotank River.

Captain had everyone CHOCKING everything with wheels after that.

Someone as a joke make a small set of chocks for a desk chair.
edit on 9-2-2017 by Miracula2 because: (no reason given)

As always i google the aircraft just so i know what the hell we are talking about and upon seeing it i thought it was rather large for a carrier but then i seen this . 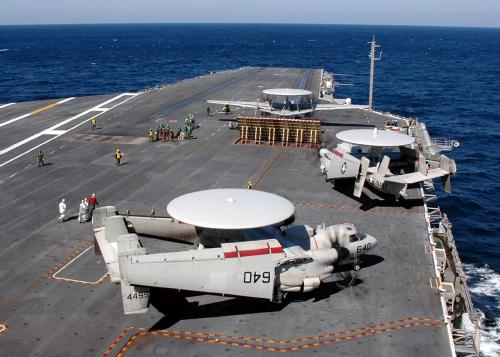 On topic , the few helicopter pilots i know always take the mechanic up for the first flight after any major or minor work being done on the heli . Kind of an incentive to be extra careful i guess . It kind of beggars belief that the wrong oil could be used . Are there no checks being done .
edit on 9-2-2017 by hutch622 because: (no reason given)


In the Coast Guard there was no difference between mechanics and fliers.


The mechanics and swimmers all rode on the helicopters and planes they worked on.


Where as I heard the Navy flight system distinguishes between the two roles.

No fixers and fliers in the Coast Guard. Same difference.

I don't blame him. Test Group lost an HH-53 and crew on a posteoporosis maintenance, long range rescue attempt. Apparently they hadn't secured the tail properly, and while they were hovering over the ship, lowering the PJ to the deck, it folded and they lost tail rotor authority.

I've seen some QA guys go over everything with a fine tooth comb,and others that as long as the wings are there and the engines are attached, they sign off on it.


I wonder what the aircraft mishap rate difference between the Navy and the Coast Guard is given that the Coast Guard doesn't have a fixers and fliers separation like the Navy.

With the Navy and Air Force, the only time the maintensive crews fly is on an incentive flight. The crew chief used to fly missions with the aircraft, but when there was an accident, he was usually the one that didn't get out.

Horrifying. The Navy includes the Marines, who if you're going by calendar year and not Fiscal Year, lost over 10 aircraft last year.

Something other than budget woes is at play here.

Yea my bad. I can't find the link I saw earlier. So 3.55 could have been anything or nothing. 582.7 billion. .. obviously I was wrong and this is not nearly enough to support the navy's project. This inconceivable number led to a deficit that cause the wrong oil to be put in multi million dollar aircraft........

This is a rediculous headline meant to do nothing but give the navy more money. They f'd up and shouldn't blame money deficits when we are arguing over amounts no normal person can concieve. If we are spending THAT MUCH on wars then perhaps we should reconsider wtf we are doing.

Billions aren't being spent on the poor and on infrastructure but we should all jump at the fact they can't put the right oil in their new aircraft.....


Maybe someone didn't want to go flying on an aircraft they thought was unsafe.

originally posted by: Zaphod58
a reply to: Miracula2

Horrifying. The Navy includes the Marines, who if you're going by calendar year and not Fiscal Year, lost over 10 aircraft last year.

The billions in their budget had nothing to do with the wrong oil being put into the aircraft. It had everything to do with half the naval aviation fleet being grounded or requiring heavy maintenance checks because they've been pushed off. The Navy portion of the Budget was $152.9B, and $9.5B for Overseas operations. Of that, $6.5B goes to SEWIP, $1.5B to G/ATOR, $0.7B to general purpose bombs, $17.4B to R&D, $6.2B to Navy shore support, $2.9B to Marine shore support, $1.1B to Construction and housing, $395M to general support. That's $36.3B, without adding in the 94 aircraft they're planning to procure, or the shipboard and aircraft weapons they're buying.

Someone ordered the wrong oil from the supply chain, and the ramp guys didn't double check it before putting it in. Probably the supply number was similar to oil used for something else, and someone just punched the wrong number in when they placed the order. Since they've had the right oil for year after year, no one double checked and they just assumed it was the right oil again.


How did they catch the wrong oil after putting it in? Quality assurance chief? Or did someone checking the dipstick notice that the oil wasn't the same color or viscosity?

Predeployment checks. They run occasional JOAP samples to check for metal shavings in the oil. That would also tell them what type of oil was used.