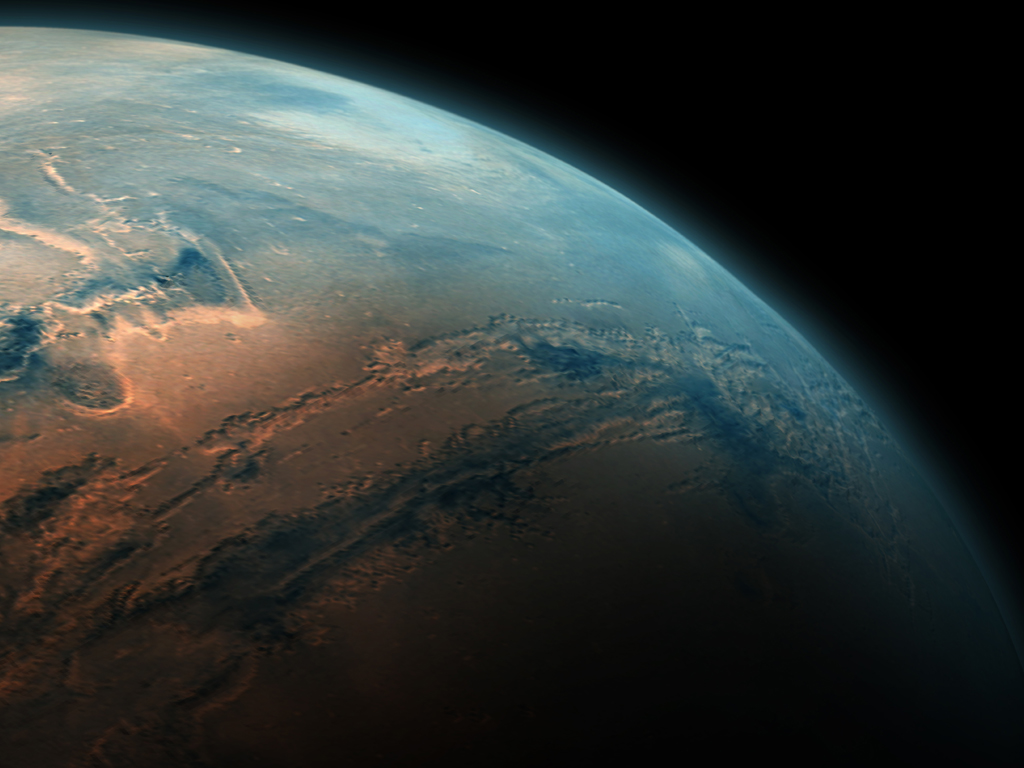 With all due respect, after all, above top politics we still have a job to do and that's finding new conspiracies to work on, Now let this remind you that what I present here isn't going to land into the Alien and UFO topic administration. No, this one comes straight from science and is here to stay.

It seems that within the heat of the election and presidency we probably overshot this important message from science that The Mounds of Cydonia seem to be of really high interest and are now suggesting that mounds" or hill-like features in the Cydonia region of Mars have remarkable geometric features.

it seems that they have measured five geological structures " wich hinted strongly at artificial surface interventions and adds new information regarding the geometry"
As I always have known and always will defend that Mars IMO has many ruins over this stretched landscape.

The use of the prime number series as a way to signal to ET is by now a fairly well-known idea. In the 1997 l m contact, an adaptation of the novel [1] by Carl Sagan, radio telescope researchers discovered a signal containing a series of prime numbers.

This led them to conclude it was a probable communication from ET.
Toward the end of the book upon which the movie was based, the main character Ellie searches for patterns in π and finds a very long string of 1s and 0s far out in the base-11 expansion of π that when arranged in a square of a specific size yields a clear drawing of a circle and its diameter.

One could say that because of the role that π plays for the circle that she has been given a scheme by which the number is rendered self-referent. This could be regarded as a second indication of an ET message. Long before this, the idea of somehow depicting the Pythagorean Theorem as a message that could be seen from space was fielded at least as far back as 1900.

Now, let's scratch the needle from the record, and forgive me that I'm not a mathematician but looking at those images and the explanation they give with several hints into the right direction one couldn't tell me that they are more favorable to the extraterrestrial hypothesis rather than just an unusual geological occurrence?


Consistent with the idea of a "message", the mound geometry is profoundly pedagogical with respect to the connection between the concepts of number and size, both in terms of length and area. One’s first experience with numbers is basic counting, not magnitude of length and area.

It is almost as if the (hypothetical) builders of the pentad were taking special pains to display the basic connection between concepts of number and magnitude of length and area.

Consider the following images of the pentad of mounds taken from our recent JSE paper [5]. The mounds (GEDBA) are highlighted for clarity.

The right triangles DBA, BAE, GEA, and DAG are all similar (having the same angles). This is shown explicitly in the diagrams below. Having exactly the same side and angle measurements, clearly, the triangles GEA and BAE are congruent right triangles Figure 5.


Now, wait a minute, The builders? Geological rocks taking on forms like Pythagoras and Dirac? Nature sure is a b@%$ doing that to us wouldn't you agree? 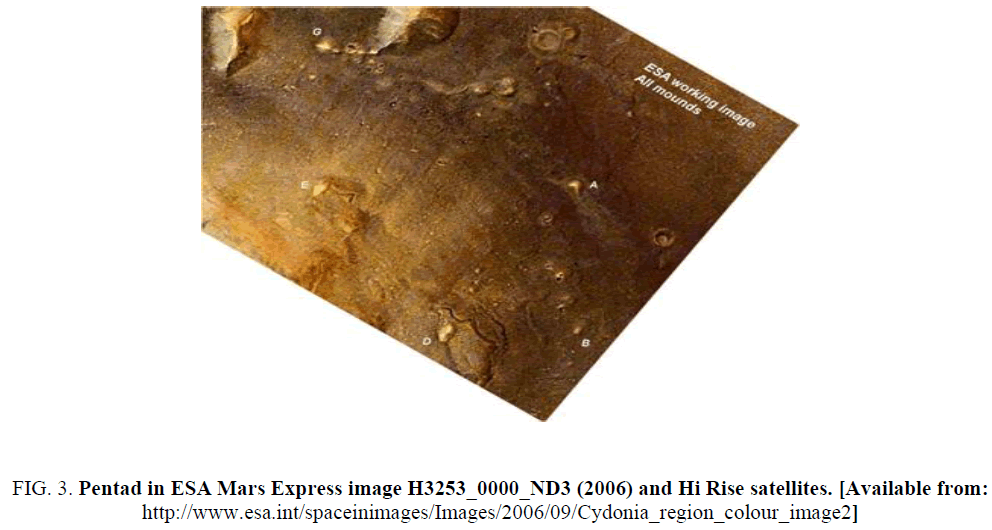 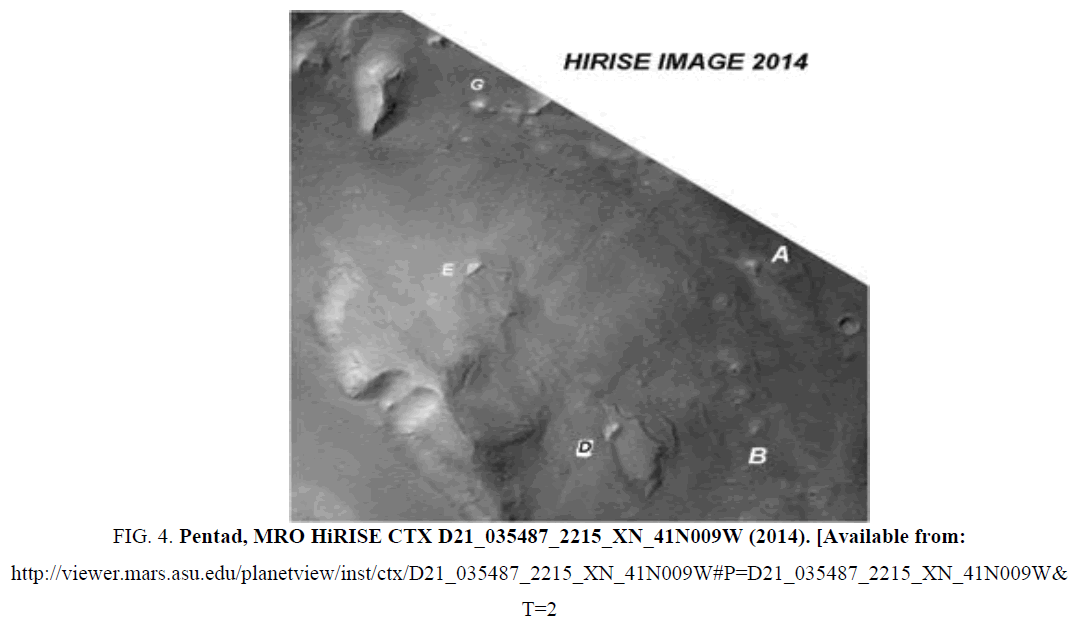 The A4 paper size used in some parts of the world is actually a selfreplication equationgrid. As the name implies, a square root of two rectangles has a ratio of the long side to the short side equal to equation .
Thus, in the above figure if DB has the length of 1 then BA would have the length of equation . The length of GE is also equal to equation . In addition to the above Viking representation of the pentad from image 35A72 in 1997, depicted below are the corresponding images from the Mars Express. 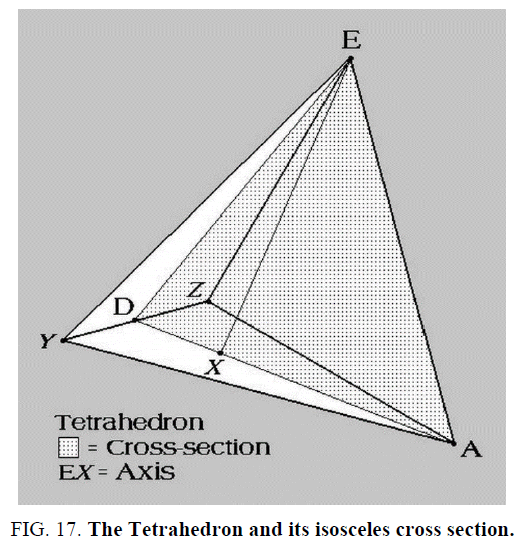 They show not only the rectangular grid in which the pentad is embedded but an extended square root of two rectangular grid. The proportions of the triangles involved are connected directly to the value of the angle t which defines the angles that appear in the similar right triangles π/ 4- t/ 2, π/ 2,) and the isosceles triangle π/ 4+ t/ 2, π/ 4 + t/ 2. As mentioned in the introduction, the isosceles triangle has internal angles which match precisely those of the cross-section of a tetrahedron.

Well, SETI did a case study of the mounds of Cydonia as Richard Hoagland pointed out before.
Why now presenting this study again puzzles me, but I will give this scientist their conclusion as they show in their papers.

The skeptic could always argue that the pentad mound placement and the implied rectangular grid is a just a fluke.
However, the addition of two extra mounds (P and M) which each reinforce the possible intentionality of the mound placements as a display of prime numbers and of the geometry of the equation rectangle and by extension the tetrahedron make the fluke argument much harder to justify. There are in fact 6 other mounds nearby which also display the special tetrahedral triangles.

The University of Tennessee Space Institute

Ehhh What, six others?

Digging for alien coprolite. What a wonderful reason to try and die on Mars. This is a truly wonderful time. No sarcasm, I really love it.

Yeah, one has to lift off this madness that's going around these days why not Mars. We need a new goal for our next generation explorers to go to..

posted on Feb, 9 2017 @ 05:33 PM
link
Awesome, I love this stuff.
From memory the D & M "pyramid" at Cydonia was tetrahedral.
Have we all been lied to about Cydonia ruins over the last 20 years? It wouldn't surprise me if we have.

The US's near decadal atrophy and regression is about to be met with an ego to affect the planets.

originally posted by: weirdguy
Awesome, I love this stuff.
From memory the D & M "pyramid" at Cydonia was tetrahedral.
Have we all been lied to about Cydonia ruins over the last 20 years? It wouldn't surprise me if we have.

Cool thread. More to come on this...

Them still talking about this, makes it suspicious enough to presume that they let we say Not lying but only withholding information for their benefit. Raising funds, needs a substantial buildup I presume?

Earlier today I posted in another thread regarding the use of rabbits (and their droppings) to aid in the colonization of space HERE.

Then, I saw this thread and thought I would share this image (pareidolia?) that is of an area in very close proximity to the D&M Pyramid: 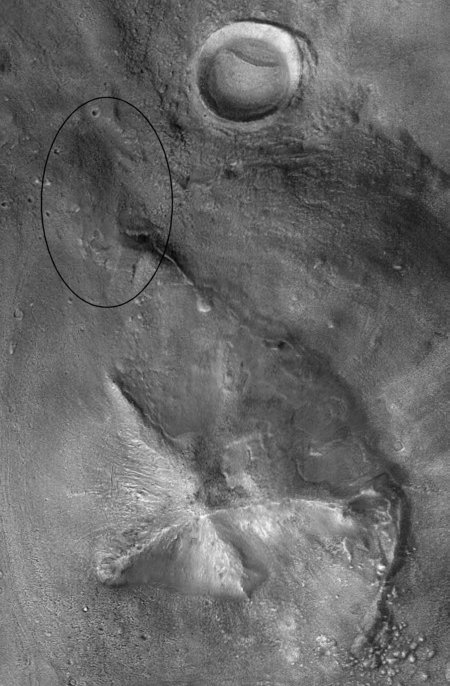 So, perhaps the bunnies are the builders?

posted on Feb, 10 2017 @ 01:42 AM
link
a reply to: seattlerat
That's funny; you just strike me as something I made a few years ago. It's nothing but its strange and I will label it as a coincidence that I made this image.

It comes with a story I wrote for the short story contest. Never actually finished the story, but in a nutshell, it tells about a race of miners that are controlled in a far distant star system. Those miners seem to have the same appearance as you point out?

Why I chose a rabbit as the main figure, I don't know. It seems that my brain receives more info then I understand myself, in a combination of me always having this fascination with Mars makes it only worse.