I thought I had heard it all from social justice warrior nutcases but I think this easily takes the cake.

It would seem the Left has done such a thorough job of fomenting divisive racial identity politics that a football team with a white head coach and a white quarterback can’t win a game without eliciting rage on social media. Behold the vitriol:

"White people been showing y'all that they're in control very aggressively lately. Donald Trump winning. The Patriots winning smh," echoed another.

"In the year of Trump, the white people stay winning. Oh well, there's always next year," tweeted one user who goes by the name "Hurricane Matthew."


I think this about says it all.. this is beyond insane. I mean, the team isn't even a white majority team. It doesn't even make sense, blacks make up the majority of the team.


And these people actually, really, really feel this way? We need to start slapping psychiatric disorders on people like this. There needs to be some kind of diagnosis for people that are capable of pathologically seeing racism everywhere like this. This has become a sickness.

Oh, well.. let the morons continue discrediting themselves. And they don't even realise why Trump won. It was you people, you people elected Trump! You've made your bed, now lie in it. 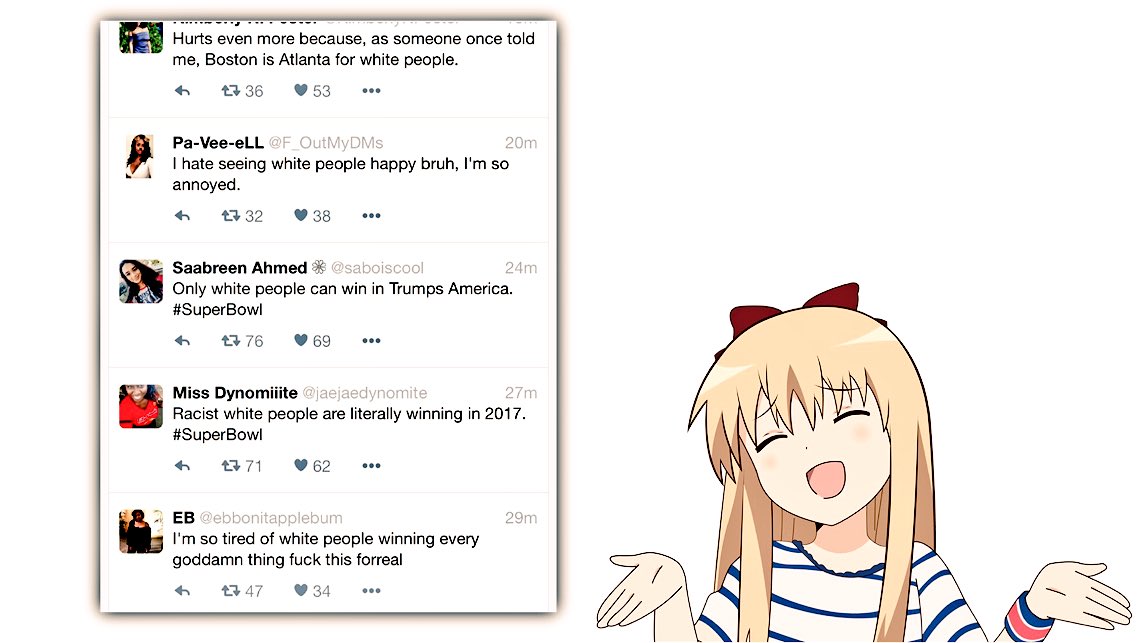 They always have problems with white males that have done nothing wrong.

Wookiep
+7 more
posted on Feb, 9 2017 @ 01:01 AM
link
I flagged this thread only because it demonstrates the complete absurdity and hypocrisy going on from the left side of the field right now.

With that said, I do think this is just another small segment of "liberals" showing their real insanity. If not? We are screwed anyway from all the nonsense so many people are buying, regardless.

I think there are many liberals who like the Patriots. They liked Tom Brady before they found out he likes Trump. Lol, then the term "patriot" offends them, so those people are a complete mess, and it's hilarious!

posted on Feb, 9 2017 @ 01:02 AM
link
I was just telling someone the other day that the final level in Identity Politics in the convergence of mass social group identities into one super-identity (textbook Nazi mind control technique) would be when they actually figure out how to bring sports tribalism drama into the already super-tribalism mix. Apparently they're on track already.

edit on 9-2-2017 by IgnoranceIsntBlisss because: (no reason given)

We need, as a country, to understand that racism is not just white on black oppression. But is in fact any grouping of skin color for positive or negative reactions.

Most of the Patriot's players aren't 'white'. All of them are human.

I am a Denver Broncos fan, the Patriots are one of our biggest rivals. But because of identity politics apparently now being injected into sports teams, and the fact that the Patriots are now seen by some mis-guided liberals as "white supremacists"....


Come to think of it, I'm glad the pats won the Superbowl. LOL.

I dig all of this crazy stuff from the left, it's only destroying their cause further.
edit on 9-2-2017 by Wookiep because: (no reason given)

I saw a lot of those tweets you just quoted. So many of them were posted by trolls..( new accounts) i know this because i checked when i saw them. IMO humans need to take what they see on twitter with a grain of salt. Twitter is NOT America...it's not even mainstream opinion anymore. The above tweets you are using as an example of racist behavior were created to do JUST THAT...invoke anger, divide. No proof the users are African american. More like alt-right pepe's stirring the pot. smarten up people.
edit on 9-2-2017 by Godz Enigma because: (no reason given)

MysticPearl
+4 more
posted on Feb, 9 2017 @ 01:16 AM
link
So we're supposed to pretend most of each team wasn't black? Or are we to pretend Brady winning is a white man winning, so racist, even though if ATL won it would also have been a white QB winning. Is it the head coaches? Nope, both white. Owners? Nope, both white again.

But this movement isn't about equality, it's about supremacy. All this racism isn't about being equal to whites, it's about being superior to whites. If blacks or whomever else of color don't win, it's racist, because all they're concerned about is being above the white man.

Of course, pro sports is an area racism doesn't really exist. It's people of all backgrounds, colors, religions, sexual orientations coming together with a common goal and working together to achieve that goal. Think the blacks in the NE locker room are sitting their thinking them winning is racist? Could have fooled me, they were jumping with joy, celebrating hand in hand with Brady.
edit on 9-2-2017 by MysticPearl because: (no reason given)

originally posted by: Kali74
Already a thread on this and really it's a very small number of absurd tweets.

At least you acknowledge they are absurd.

How come none of those tweets are to be found on those Twitter accounts ?

"Think the blacks in the NE locker room are sitting their thinking them winning is racist? Could have fooled me, they were jumping with joy, celebrating hand in hand with Brady."

EXACTLY! I wish people would realize all of this race baiting is to keep us distracted from the REAL divider, CLASS WARFARE. The rich just sit back.. watching the black & white slaves battle each other... as they laugh...
edit on 9-2-2017 by Godz Enigma because: spelling

I just like football and love my Pats. This political crap on top of their crazy come back is pissing me off.


I choose to ignore that Brady, Belichick and Kraft support Trump.

Good for you! Sports teams shouldn't be made political.

Ok, so I just verified these Twitter accounts are real - all of them except Saabreen Ahmed as her account was private. And I doubt they're alt-right trolls as these accounts are hardly new.. putting this much effort into something like this, all these photos. It's highly unlikely that these accounts are fake.

As for the specific Tweets I don't really have the time to hunt them down. It's possible though that if they can't be found that they were deleted once the article was published. But honestly, at this point would it really surprise you if these tweets were real?

Yes, we're only talking a few people. I still think it's indicative of a wider problem. These may be some of the most extreme cases but there's still millions and millions of nutcases that are only one or two steps away from this type of madness and every year there's a new batch of millions of newly brainwashed youths coming from these colleges and universities.

I'm not an American but as a foreigner looking from the outside in it's pretty clear to me that blacks are way, way more racist than your average white people. The racism of the alt-right on the other hand is a direct reaction of this blatant racism. It seems blacks can get away with saying the most racist sh*t while whites will lose their jobs or get viciously attacked for expressing similar sentiments.

And yes I agree. It's a divide and conquer scheme but it's also abundantly clear that the monstrosity that has become modern liberalism has been the main driving force behind this sorry development.

posted on Feb, 9 2017 @ 02:02 AM
link
I agree that this is blown way out of proportion. A few tweets from random troll accounts does not a "torrent of racial hate" make.

I'm tired of the SJWs as much as anyone, but come on, if this isn't fake news I don't know what is.

Ok, so I just verified these Twitter accounts are real - all of them except Saabreen Ahmed as her account was private. And I doubt they're alt-right trolls as these accounts are hardly new.. putting this much effort into something like this, all these photos. It's highly unlikely that these accounts are fake.

As for the specific Tweets I don't really have the time to hunt them down. It's possible though that if they can't be found that they were deleted once the article was published. But honestly, at this point would it really surprise you if these tweets were real?

Accounts are real but You won't find any of those Tweets from the screenshot. They could have been deleted but they could also have been photoshopped.

Reminds me of this thread :

"Young Woman Claims She's Getting an Abortion Because Of Trump"
www.abovetopsecret.com...

Totally fake. Funny how most vocal opponents against MSM and "fake news" on ATS are those who makes threads based on random screenshots from social media that can't be verified

posted on Feb, 9 2017 @ 02:51 AM
link
Simple solution if you hate "white America", head down town to the embassy of Somalia, Zimbabwe, Eritrea, Ghana, Nigeria etc etc and get a working visa and build your new life in a "Black" country where you can enjoy all the aspects of domestic black dominated sports...

Moaning on social media about a BS problem that does not exist just makes you look like a f#cking whinging liberal nut job that as normal will talk smack yet do sweet f#ck all to better their position, in this case move to a black dominated country...

Had you of said 20 years ago this would be the social situation we faced in the west I would have said f#ck off no way, I actually thought this petty BS way of thinking had long gone, amazing that so many "enriched" peoples hate their way of life and surroundings yet folks will not take steps to get out to a better life and situation they obviously so desperatly want, on that note try this BS in Zimbabwe and see how far you get...