This is a discussion of the particular ideology of Steve Bannon (not the mud pit). He has wiggled his way onto the National Security Council with the security clearance that belongs to Generals of the US Military.

So in terms of ideology, as Bannon gains power, his personal beliefs become extremely important to understand...what I am learning chills me to the bone.

(If you don't like the video source up top here, there are plenty of lengthy ones on youtube that will equally prove the point - a couple are at the end of this OP.)


What should we do when the top advisor at the highest level of our government expects such a thing as “The Grey Champion, a messianic strongman figure” of “The Fourth Turning” to actually be here (himself, perhaps, or his boss?) to usher in the apocalypse?

Holy crap. I’m not making this up.

1)  The complete final destruction of the world, as described in the biblical book of Revelation: ‘the bell's ringing is supposed to usher in the Apocalypse’  More example sentences
1.1 (especially in the Vulgate Bible) the book of Revelation.


Bannon, it turns out, is a great believer in an historical “theory” (I would say philosophy, not theory) regarding “cycles” of major disaster in American History followed by awakening and expansion (or possibly annihilation - could go either way).

Bannon, like one of the theory's founders, believes one of these cycles is upon us and that it is INEVITABLE that we head into some Great War and experience hellish pain so that we can either be broken or come out all shiny and new on the other side. Because cycles. Because destiny.

In such a position of power, with such dangerous sentiments regarding an apocalyptic war in the world, isn’t Bannon now in a position to BE the “The Grey Champion, a messianic strongman figure” who will appear at “the new Fourth Turning.” Can he not be the HERALD and ENACTOR of his own philosophy of doom?

(Bannon thinks war with China is inevitable - ref below, as well as a massive Middle East/Islamic war of some kind - more than we have now.)

Okay - so what is this theory (philosophy) about?

From Time Magazine: Is Steve Bannon The Second Most Powerful Man in the World?


Sometime in the early 2000s, Bannon was captivated by a book called The Fourth Turning by generational theorists William Strauss and Neil Howe. The book argues that American history can be described in a four-phase cycle, repeated again and again, in which successive generations have fallen into crisis, embraced institutions, rebelled against those institutions and forgotten the lessons of the past--which invites the next crisis. These cycles of roughly 80 years each took us from the revolution to the Civil War, and then to World War II, which Bannon might point out was taking shape 80 years ago. During the fourth turning of the phase, institutions are destroyed and rebuilt.


This simplistic and rather Biblical-esque, strong-man approach to history and governance is not a good template to follow for the nuclear age.

And Bannon’s apparent willingness to embrace the pain and destruction of the world to fulfill this personal and dark vision is WHY people are terrified of this administration, that seems to whole-heartedly embrace chaos and court conflict.

As with any such sociological/historical theory, it is non-falsifiable, and non-provable, it is therefore NOT testable, and not as much “theory” as personal philosophy. It casts a broad net, and the net has holes.

In other words, it is something a couple of historians made up based on patterns they saw and fit data into (regardless of whether everything dovetails neatly into their theory or not) and that they now make money with books and speaking engagements to groups that align with their thinking.

In fairness, the theory has received both good and bad reviews. But a theory such as this in the hands of someone who has the power to ACTIVELY CREATE the very “predicted” apocalypse, this “Fourth Turning,” due to his BELIEF that it is TRUE, through consciously created policy, is more of a horrific self-fulfilling prophesy, than an expression of some inevitable social theory. It becomes more of a "to do list" than a result of historical forces, this march toward war.

While some may find this an exhilarating set of ideas, especially those who already have a strong belief in, and even religious need for, an ‘Apocalypse,’ others understandably find it completely nuts. People (of whatever political bent) who see how dangerous this line of thinking is for those with hands on the nuclear codes, it is exactly what we do not need in the American Whitehouse.

It is an ideology of death.

(Since Bannon wants to “burn it all down,” I suggest we send him to live in Syria or the Sudan for a year or so, and see if that is really what he wants for his family, your family, and for the world. And he should visit Hiroshima.)

We should all be grown up enough to know that World War and nuclear weapons is the death knell for the human species as a whole, and that there is NO “winning” of such a war, but only death and loss and grief. The old image of the "last human standing" grabbing onto a bloody bit of barbed wire fence as the world burns around him, irreparably damaged by nuclear holocaust, and shouting "Victory!" comes to mind. 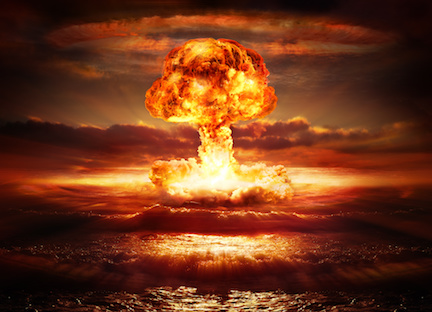 IT DOESN'T HAVE TO END THIS WAY...DOES IT?

I mean, is this what we want for our nation?

Is this what you want?

For those who simply want a better life for their families, who want to live their days and play with future grandkids, who want to be able to afford healthcare and food and clothing and a solid roof over there heads, who want something better for the future, this kind of dark-hearted philosophy is best placed back on the shelf, and away from the reigns of what’s left of our Democracy.

Perhaps a "reset" between the generations needs to happen. Perhaps the rural and the urban need to find common ground beyond being genetically human. Perhaps we need to research our own "foreign" pasts and realize that "we have seen the enemy, and the enemy is us."

I don't know. But what I do know, is that there is a final opportunity, before war is created where it need not have been, to think and think hard about what we want, and how we want to live, and whether or not someone like Bannon should be whispering in the President's ear.

in hope of Peace,
AB

The "clash of civilizations" theory is actually quite common. Many conservatives believe in it.

The guy has no power.

Nobody tells Trump what to think.

Just listen to him...Does it sound like he listens to anyone ?

Relax...Its not the end of the world.

He will be gone in a year.

Agreed, although I would describe it more as dangerous at a deeply psychotic level.

To quote his own words;

Darkness is good … Dick Cheney. Darth Vader. Satan. That's power. It only helps us when they get it wrong. When they're blind to who we are and what we're doing.

The simple truth is that he is a psychotic delusional individual.

He is going to be a problem.

There are bigger issues than Bannon

Your nation is going full retard

Ironically, there is no truth to anything you said. The whole darkness is good quote was taken wildly out of context. You bought into fake news. Why am I not surprised?

Bannon was basically saying that the ridiculous characterizations of him being some evil mastermind actually helps him. He's correct because his detractors look ridiculous.

jtma508
+2 more
posted on Feb, 8 2017 @ 04:05 PM
link
For what it's worth I'll put this out there... I'm soon to be 65yo. I've been around the block a few times. From my earliest memories I have had this strong, visceral feeling that during my lifetime something epic was going to happen. It had nothing to do with me personally and was beyond my control. It was going to be decidedly unpleasant but things would be much better on the other side. I have never had any inkling of what this 'thing' is. All I can say is that the feeling is more deeply rooted than any other in my life. And again, this wasn't some idea I came-up with later in life, this has been something that has been with me since childhood. It's strong and it is always there. FWIW

Ain't gotta tell me twice!! Thanks for the solid review!!

Great thread, I will watch a few of the videos when I get home.

And for all the diehards, if we are to vet the people who come into the country, than as citizens we need to do the same for who runs it.

I don't care what side of the isle you're on, we've been burned by far to many. And it's the blind loyalty that helps the system perpetuate in that fashion.

Deny Arrogance
+11 more
posted on Feb, 8 2017 @ 04:13 PM
link
The security clearance that belongs to Generals of the US Military....and thousands of other Americans including Bannon himself when he served as an officer in the Navy as a special assistant to the Chief of Naval Operations at the Pentagon.

posted on Feb, 8 2017 @ 04:13 PM
link
I think the world has bigger stuff going on than Trump and Bannon;
they are not driving the deeper political movements.

What it boils down to is are the nations in more instability now
than a decade after WW2? If so, why?

Is this instability cycle driven, or are the cycles driven by people in
high places with monetary control?

Trump is not Hitler.

Both sides REALLY need to drop the rhetoric.

If we had a Department of Peace and Love, would da man spring Charles Manson, and make him the head of it?

Thank you. I agree wholeheartedly and appreciate your willingness to be objective.

Bannon is not the only force at play here, but he is in a unique position to advise Trump on policy that could lead to his vision being made manifest.

This thread scares the bejesus out of me.

Excuse me while a go head to my bunker and lock myself in.

originally posted by: ketsuko
a reply to: AboveBoard

Ha ha!! Honestly, I was just telling my husband that I would happily take McCain, Romney, Papa Bush (whom I voted for) or even Reagan. Not so much Bush Jr. because of the whole near-Depression and bungled war thing. But a solid moderate Republican? Sure. I'd take them over Trump & co any day.

Does the OP topic bother you in any way? Do you agree or disagree?