page: 1
20
log in
join
share:
gortex
+5 more
posted on Feb, 8 2017 @ 11:56 AM
link
University of Warwick researchers have discovered what has eluded astronomers for half a century , the White Dwarf Pulsar they have found is the first to be discovered in our universe and is part of a binary star system , an artists impression of the binary stars has been created to show the White Dwarf Pulsar in the distance as it lashes its neighbor , a Red Dwarf , with a focused beam of radiation every two minutes. 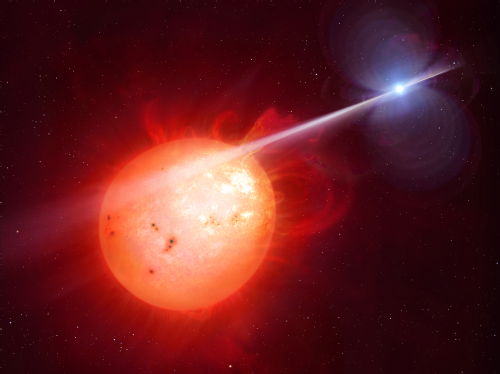 The newly discovered Pulsar resides in the constellation Scorpius and is named AR Scorpii or AR Sco.

The latest research establishes that the lash of energy from AR Sco is a focused ‘beam’, emitting concentrated radiation in a single direction – much like a particle accelerator – something which is totally unique in the known universe.


With an electromagnetic field 100 million times more powerful than Earth, and spinning on a period just shy of two minutes, AR Sco produces lighthouse-like beams of radiation and particles, which lash across the face of the cool star, a red dwarf.

As the researchers previously discovered, this powerful light house effect accelerates electrons in the atmosphere of the red dwarf to close to the speed of light, an effect never observed before in similar types of binary stars. The red dwarf is thus powered by the kinetic energy of its spinning neighbour.


Professor Boris Gänsicke comments: "AR Sco is like a gigantic dynamo: a magnet, size of the Earth, with a field that is ~10.000 stronger than any field we can produce in a laboratory, and it is rotating every two minutes. This generates an enormous electric current in the companion star, which then produces the variations in the light we detect."
www2.warwick.ac.uk...

Totally cool. Can't wait to see what the James Webb telescope will make of it.

posted on Feb, 8 2017 @ 12:27 PM
link
Definitely would not be interested in being blasted by that thing even once.

posted on Feb, 8 2017 @ 01:11 PM
link
You know what the problem with really cool and informative threads is?
Unless your a professor of history or in this case astrophysics you cant really contribute in any meaning full way other than to say "thats pretty cool S&F" which is a shame because these threads deserve alot more credit and attention than they get.

Sadly I have nothing else to add other than

As long as you like it that's good enough for me.

Well, "red dwarf" could also be a metaphor for a certain someone....

****ducks to avoid flying objects being hurled at me****

Oh yeah and cool find! I still hold out hope that one day I will be able to visit the stars and see these wonders in my lifetime.

I want to stick something in it.

posted on Feb, 8 2017 @ 02:49 PM
link
Now were your bug eyed alien,that would be prime realty for a spacefaring race to obtain power.
Start out as a country store, in time there's a community and somebody has a new place for an intergalactic off-ramp.

It sounds a bit dumb put that way, but I would look at such anomolies very closely.
( And not one bit of scientific gargon. Science effects everyone. )

posted on Feb, 8 2017 @ 03:32 PM
link
a reply to: gortex
Very interesting. A while back I was research different stars and binary types and one of them was an x-ray binary. I liked the low mass x-ray binary because of the connection to the antimatter cloud at the center of our galaxy.

So it seems it was theorized long ago (at least 1967) a rotating magnetic neutron star would emit radiation--a pulsar. It seems several elements come together to determine what a collapsing star becomes.

It seems lower mass stars collapse to become white dwarfs, but takes a medium to high mass star to produce neutron stars, black holes and other compact types. Some stars are so long lived they won't collapse for a very long time.

Also the not yet discovered black dwarf is of interest. A white dwarf which cooled so long it no longer emit heat or light. It requires more time than age of our universe, so we're not expected to find one.

Theory can be exotic--and less probable in many cases:
en.wikipedia.org - Exotic star...
edit on 2/8/2017 by jonnywhite because: (no reason given)