posted on Feb, 8 2017 @ 07:37 AM
link
Seems like the leaders around the world are getting some real info from Trump in a way that they may not be entirely comfortable with. I can't say that I totally disagree with Trump's words or delivery.

If being truthful with other leaders is causing fallout, what is Trump supposed to do?


The State Department is struggling to contain the fallout as Trump goes off topic in calls with foreign leaders.

Trump is letting all our allies know how unhappy he is about America being shaken down by other countries. I assume he is talking about crap deals with Mexico, and China.


President Donald Trump spent much of a recent phone call with French President Francois Hollande veering off into rants about the U.S. getting shaken down by other countries, according to a senior official with knowledge of the call, creating an awkward interaction with a critical U.S. ally.

Trump, who is no fan of NATO or the UN, told France that they can continue to protect NATO, but the US want our money back. An un-named official said Trump seems to be obsessing over money. Just like a huge chunk to the US population-try making ends meet with no raises for 35 years.
The un-named official also said that Trump's style of speaking to other leaders is unusual, and he uses slogans and his conversations are not organized.


At one point, Trump declared that the French can continue protecting NATO, but that the U.S. “wants our money back,” the official said, adding that Trump seemed to be “obsessing over money."

“It was a difficult conversation, because he talks like he’s speaking publicly,” the official said. “It's not the usual way heads of state speak to each other. He speaks with slogans and the conversation was not completely organized.”

Trump has warned the Pres. of Mexico that the US may send troops to Mexico to clear out the bad hombres, and also basically told the Prime Minister of Australia to stick his refugees. Trump said that taking the Aussy refugees maybe giving the US the next Boston Bomber. Seems like the leaders around the world are going to get some real info from now on. I can't say I disagree with most of what Trump has said.


Trump and the White House have so far brushed off the concerns, which spiked after reports emerged that he warned Mexican President Enrique Peña Nieto that he might send troops to Mexico to clear out the "bad hombres down there” and that he argued with Australian Prime Minister Malcolm Turnbull over a prior agreement with the Obama administration to resettle refugees from a camp in Australia, saying that Turnbull is giving him “the next Boston bombers.”

he was elected to put America's best interests first. its going to take some getting used to, maybe the slush funds going abroad are coming to an end.... at home a different story, seems like the swamp is just about to get swampier.

I wonder if this is the same source who said that Trump berated the Aussie PM?

I knew that story and the one about the call with the Mexican pres were total and utter BS and I know this one is too.

posted on Feb, 8 2017 @ 08:11 AM
link
Trump is a straight shooter and I think that whoever isn't used to it will leaen to appreciate it. He won't let the US be taken advantage of lime Obama allowed for 8 years. These leaks of the phone conversations are inaccurate and proven when the actual parties involved speak out. It's the next narrative, Trump is mentally ill. More BS.

Trump didn't say that, and he said it and good on him, and this needed to happen because the world is corrupt, also this is just more msm lies. Trump isn't a psycho!!! how dare you think that by listening to his words..I know you are secretly thinking he is a psycho but he isn't, but man he is savage with no filter.


Fantastic voting block we got here...glad they chose who is leading the most powerful military on earth.
240 years of nation and alliance building with the world...and then 2017 comes...

Maybe Trump would do himself a favour if he took advice from the Langley Virginia boys and Co....he needs to do something fast,

Come to think of it, he'd need to get the bloody wall done fast...to protect himself!
edit on 8-2-2017 by smurfy because: Text.

Come on, admit it SFX...our system needed a little shaking up. If nothing else Ordo Ab Chao...

Agreed, Trump's nest is already feathered. He doesn't need to lie cheat and steal, but he still could.


He won't let the US be taken advantage of like Obama allowed for 8 years.

Article Title: "Steve Bannon's obsession with a dark theory of history should be worrisome"

President Trump's adviser, Steve Bannon, is on the cover of this week's Time magazine, and in the piece it is revealed that Bannon deeply believes in a theory about America's future laid out in a book called "The Fourth Turning: What Cycles of History Tell Us About America's Next Rendezvous with Destiny."

it is revealed that Bannon deeply believes in a theory about America's future laid out in a book called "The Fourth Turning...."
This fact should concern every American.

Bannon believes that the catalyst for the Fourth Turning has already happened: the financial crisis....

In-My-Opinion ->> Steve Bannon, Advisor to the President, is completely wrong in thinking the Financial Crisis' was the catalyst for this particular Era's ~Fourth Turning~ (or Paradigm Shift)

i see the OK City bombing in '95 & the WTC-Pentagon attack in 2001 as the Catalyst that set the 4th Turning paradigm-changing epoch in motion...

...the two homeland attacks were created/organized by radicalized zealots from the homeland of Islam Jihad
and the other attack which was thought to be a clandestine 'radicalization' of Caucasian perp's...involving a supposed peaceful NGO which operates as a 'Brotherhood of Muslims' or MB
the attacks are the acts of Offensive Jihad & not the result of hatred of USA freedoms/wealth/policy/or It's Ally Israel...

Wrap Up:
Steve Bannon, president Advisor...needs to get-up-to-speed by listening to the Kellyann Conway handle on the present day World-View / Zeitgeist

originally posted by: The GUT
a reply to: SaturnFX

Come on, admit it SFX...our system needed a little shaking up. If nothing else Ordo Ab Chao...

The system doesn't need shaking, it needs foundation. We will never get to space colonization at this rate.

We have had a bunch of crroks in office,paid off,now we have someone who doesn't need money,and doesn't need to pander to socialist's,our country's best interest is his goal,who cares if socialist whine,they whine anyway

originally posted by: Oldtimer2
a reply to: seasonal

We have had a bunch of crroks in office,paid off,now we have someone who doesn't need money,and doesn't need to pander to socialist's,our country's best interest is his goal,who cares if socialist whine,they whine anyway

What makes you think Trump doesn't need money?
Take for instance Serena Williams cutting a tape at one of his golf courses, putting down a charitable gift of $1200 to the Serena Williams Group from his foundation, then putting that in his list of foundation payouts on an IRS form, presumably as an allowable expense. But what really happened no money was given to Serena, what Trump gave her was a framed picture of herself, and a lift home in his aircraft. So you can guess where that so called donation went to!
List of 'charity' donations. 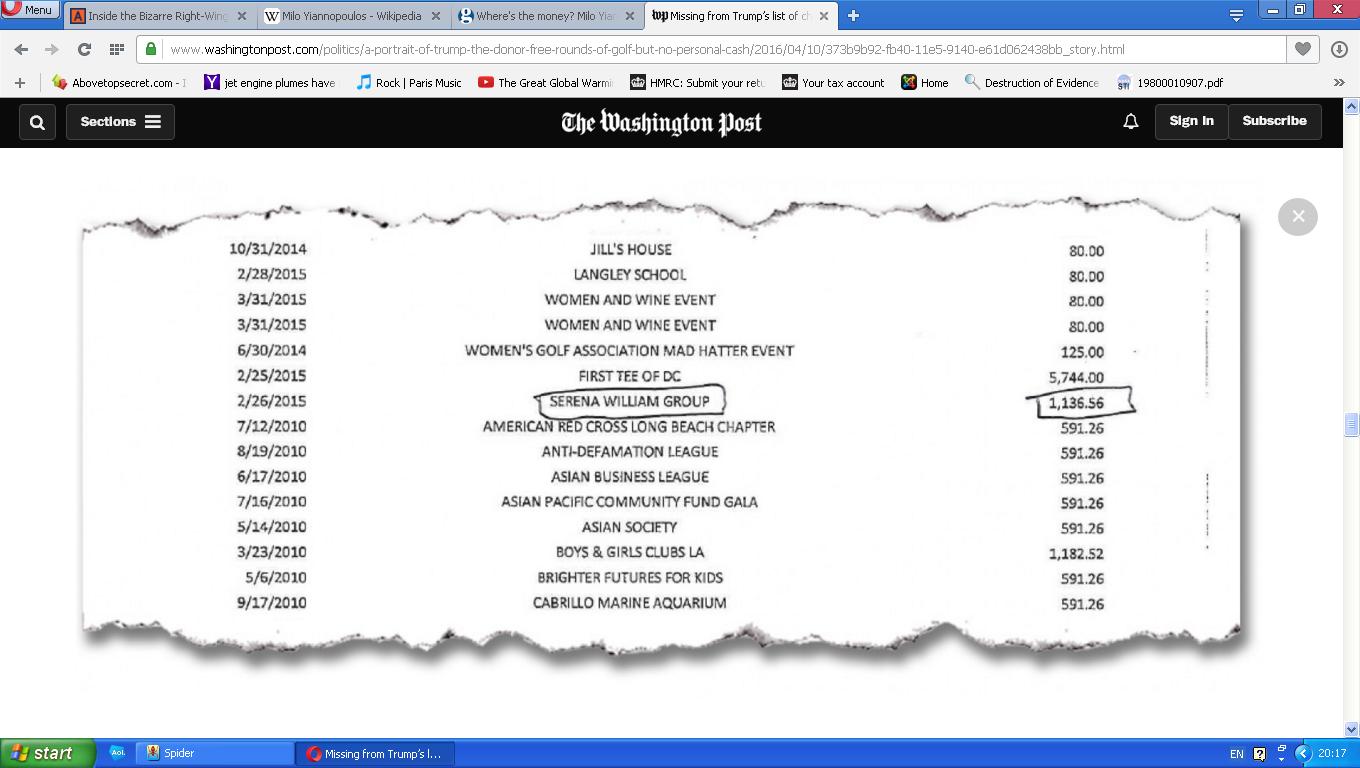 
He's done stuff like that thousands of times, and has given very little of his own money to charity....he's a bloody crook.
edit on 8-2-2017 by smurfy because: Text.


“It's not the usual way heads of state speak to each other. He speaks with slogans and the conversation was not completely organized.”

Which would be how 2 lawyers would be "conversing" , glad that is finally over and done with, we needed some real talk.

Trumps un-diplomatic diplomacy isn't really as bad as reported IMO.
Yes - it's a little embarrassing, but it doesn't really matter...

When Trump and his idiot Navarro cried about the German trade surplus for example, and again threatened to impose a border tax against German automakers, some industry representatives were alarmed at first... then Gabriel met with Tillerson and Pence - and they backpaddled.

Trump just spouts alot of hot air and that's pretty much it.

*He has to act tough to appease his followers, but I doubt he'd be allowed to cause serious damage for the U.S.
edit on 8-2-2017 by ColCurious because: (no reason given)