So in germany this cover reflects the oppinion of the populace. Germans really strongly believe in the concept of the Separation of powers because of our past . We have many, many Systems in place to stop a leader from doing anything without approval of The Bundestag (congress). In fact something like trump does right now would be impossible in germany (executive orders).
So for us what trump does is not democratic. Do you understand why one of our biggest newspapers chose this cover? If not. Why? 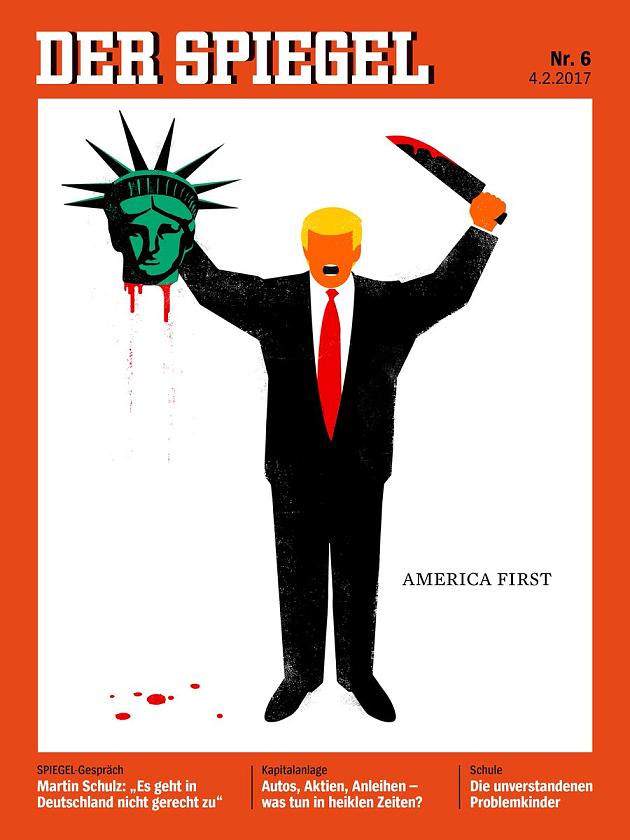 Who cares what some liberal globalist rag has to say about Trump? American liberal papers have been printing the same garbage since he announced his run, pretty irrelevant really.

Aw. windword beat me too it!

posted on Feb, 4 2017 @ 01:12 PM
link
a reply to: Synchronicity11
No, I don't understand. Why is it that people are acting like Trump is the first president to use executive orders?
Check this out, just scroll down a bit for a decent graphic showing how many executive orders each previous president has signed.

Why has Germany not acted the same way during the years of many, many more executive orders than Trump has signed? How about the hordes of them Obama signed in his last few weeks of office alone?

Also, that linked to article is pretty good. Definitely worth a read.
edit on 4-2-2017 by Noncents because: Expanded

Yeah - you should have seen the one when Reagan won. Great illustration with the headline:

posted on Feb, 4 2017 @ 01:18 PM
link
Is this multicultural sensitive muslim Trump or something? Confused

Yes instead your leaders sidestepped this issue by using unelected bureaucrats in Brussels and Frankfort.

I understand your culture self-punishes and holds itself back for something that happened 75 years ago, which is sad for a culture that is superior to most. The american midwest(new germany) sends its regards.


Ummm...No...your quite right...we should just let the Muslims in by the millions...why...just like you did...

That way we too could turn a blind eye to the raping...pillaging...and burning...just like you do...

Then we could all sing Kum By Ya together as western civilization gets swallowed by Islam...
Which is cool...cause...multiculturalism...and all that enlightened version vision you have over there...

I sure can't wait until your German heritage and culture are erased by the horde...It'll be fun to watch...

I am happy opposition to Trump is world wide.

As well as it is in America.

I think it's an excellent cover and one that expresses the true state of affairs here in the U.S. Having lived in both the US and Europe for many years, my perception is that Germans, and Europeans in general, are far more politically sophisticated than most Americans.

You can find softer versions of covers like these on the New Yorker. Der Spiegel is a similar type of weekly magazine, like Time or Newsweek. They have excellent articles as well, which anyone can read in their English edition. But only Americans who have realized that the news is very different outside of the US will be checking out their very intelligent and informative articles.

And a big thumbs down to those who criticize it without ever have read it.

When Trump starts interning anyone, or goes after certain demographics of citizens, than maybe the cartoon would be more appropriate.

The guy has been democratically elected, whether anyone likes or not.

As we have seen today, there are checks and balances in place, the rule of law is alive and well.

originally posted by: Noncents
a reply to: Annee
I understand your anti-Trump stance. He can do nothing right by you.


Maybe you should teach Trump about how government is supposed to work.

And that he's no longer a slumlord, corporate raider.

posted on Feb, 4 2017 @ 01:40 PM
link
Every EU country is reporting the same narrative when it comes to Trump. Because every EU country is corrupt to the core. We have ( me to as a Belgian ) encountered enought examples of corruption and bad decision making by our poloticians in our lives.. On the debate dates from past election, when Trump was debating, we had a few live pannels on television, what a suprise they had 4 anti trumps and 1 pro on the table, i saw this on every debate. The fact is that Trump's ideas go direct against the corrupt elites that control Europe's, American and Israelic politician stage.

That's the reason why they are all against Trump, my guess is he isn't a controlled/payed actor on stage and he means bussines.

I'm also sure Trump won't stay president for 4 years. The rulers have a whole bunch of toys in the box to try and manipulate the outcome of our future. Last card they will draw is an assassination, we have seen plenty of those in history !

Let's face it, i was skeptic about Trump, but i almost cry'd of happyness that Hillary lost.. A war was iminent if she got in the office... Trump is actually doing more in a week then Bush and Obama did in the first 3 months... And his methodes and actions seem to counter the corrupted politicians and agreements, wich is the first President to do so right in the open !

posted on Feb, 4 2017 @ 01:44 PM
link
Obama uses executive orders, liberals applaud. Trump uses executive orders, he's destroying the country. That's why you can't take these liberal criticisms seriously, it's nothing more than hysteria and hyperbole.
edit on 4-2-2017 by TruMcCarthy because: (no reason given)

So for us what trump does is not democratic. Do you understand why one of our biggest newspapers chose this cover? If not. Why?

Well first we are not a democracy like Germany, we are a republic. Second, what Trump is doing is well within his legal limits as all Presidents before him have used 100s of times throughout each of their 4 years.


Its like the electoral College that has worked fine since 1787 and fantastic for every Democratic President, but now they want to change it. Same with executive orders, was fantastic when Obama was turning them out all over the place, but now they are so wrong.... lol