posted on Feb, 3 2017 @ 01:36 PM
link
So it's nothing new that the powers that be are employing vast amounts of human and logistical resources to spread disinformation on a myriad of topics, specifically conspiracy theories. However one "strain" in particular is gaining an alarming amount of traction. So much so that this movement is essentially shooting itself in the foot because of how blatantly obvious they are making their attempts to dilute and detract from real issues.

Of course we are talking about the Flat Earth Theory.

There is in fact one topic in particular that is receiving the brunt of this assault but conveniently enough we aren't even allowed to loosely allude to it here...

So with that said, listen to David Seaman's analysis of this trending ploy who is likely the most prominent figure being targeted by this disinformation stunt:

when I see verifiable evidence of one of the many "ends" as a flat Earth would have, I will be it's biggest supporter. Until then, I will remain skeptical and place this theory just below chemtrails on the "possibility list".

The very fact that nobody has evidence of an end, and they get really angry when you ask for proof of such thing, goes a long way to showing what the FE exercise really is. (proof that some can debate better than others)

Generally speaking the big bad government doesn't have to do much work to make CTs, especially ones that push the flat-earth idea, sound like nutjobs.

You folks typically do a fine job of that yourselves.

posted on Feb, 3 2017 @ 02:00 PM
link
The one and only reason I ever wonder for a second if Earth could possibly be flat is because NASA and our government says it is round. I'm being mostly sarcastic but they breed doubt and conspiracy. 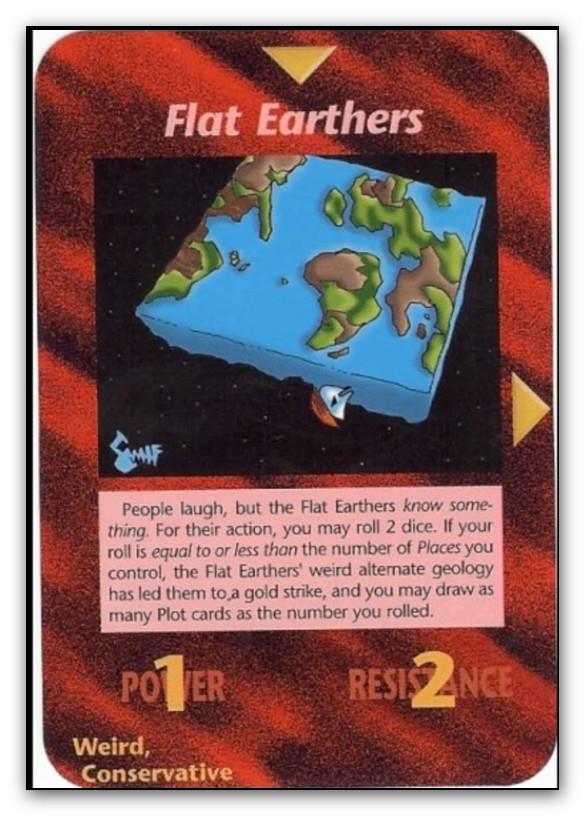 And also if your interested into looking deeper, watch "there are no trees on flat earth" I recommend the English dubbed version.

That video I know is shunned here along with the FE theory.

I have not noticed any flat earthers having any fear of talking about it openly admitting it. In fact i have noticed the exact opposite and even a lot of pride and snobbery about it from them. Them acting like they are better then the rest for "knowing" and feeling "enlightened".

originally posted by: Gh0stwalker
a reply to: Shamrock6

Bub, you set the table up nicely for my comment with your

I won't even humor the idea, as it is quite clear what the agenda is behind it

. That's why you folks come off looking the way you do, because in your OP you've already begun attempting to shut down any kind of dissent whatsoever. That's literally exactly what I was referring to with my comment and true to form, it sailed right over your head.

As for alienating the entire demographic? I've never made any secret of my belief that CTs do a magnificent job making themselves and the entire community look bad. Generally speaking when you call the parents of dead kids and tell them they're liars and their kids aren't really dead, people take a dim view of that specifically and the type of people that do that in general.

The fact that you feel so offended by somebody pointing out that the CT community has an image problem is, again, literally exactly what I'm talking about. The government doesn't have to do anything to make us look bad when there are people calling parents of dead kids and going into pizza joints and shooting randomly. Crap like that paints the entire CT community in a bad light, and your refusal to acknowledge that or discuss it doesn't change it one teeny tiny bit.

"Deny ignorance" is a great slogan. It's just a shame more people here don't practice it.

Well that was a mouthful...

I think you've just got an axe to grind, pal. Your "point", whatever it may be will likely be lost to most of us.


They manage to package it as if they know what they are talking about. But so did anita sarkeesian who popularized the word "Dichotomy". But if you are able to do the math you soon notice they are not even able to recognize that 1+1 equals 2.

And dont get me started on their "perspective" theory with which they explain how the sun and the moon are really within our atmosphere rotating in circles above us and not really around our globe. Its all bunk.


here look at this "irrefutable" proof they have based on a amateur rocket launch of which they claim is proof that it hit some sort of firmament.

Now some people maybe in awe and are immediately convinced because after all you do you the rocket all of a sudden come to a full stop when it comes to its spinning right? and you dont see the earth moving further away right ?

The rocket manages to stop spinning in a heart beat because it uses a "Yo-Yo De-spin" mechanism to instantly stop it from spinning. It did not hit some magical barrier that we cannot cross. Here is one in action in a room under controled conditions:

Just imagine deploying a parachute while a rocket is still spinning like that.
So we got that debunked already. This video and many others like it is/are main points of their arguments btw and used by every single flat earth youtube channel. Still think they are compelling ?

And the illusion that it is not moving up at all anymore from the moment it "mysteriously" stops spinning is simple. The distance to the object in the background. You wont see it getting further away between the moment the rockets engine is cut, the de-spin activated and the point it starts falling back again, its simply to far away to see that.

And how does a rocket going at those speeds come to a full and instant stop without being torn apart into a billion pieces by the kinetic energy released ?

Also their horizon explanation. or lack there of. seeing ships way out in the distance with a telescope and noticing that only the top half is visible is also either again , perspective or ..wait for it .... ...... Waves.........

I will leave you with this ,Here is their hero, the worlds first flat earth engineer


^I feel sorry for anyone thinking this is compelling evidence.

We know the flat earth theory is preposterous. However, disinformation shills are using this to discredit legitimate issues by flooding the comment sections with their nonsense, preventing any meaningful discussion of the topic at hand and disuading further investigation for fear of being lumped in the same category. Did anyone watch the video?...

This is information warfare at its worst. They are playing as dirty as they possibly can and if we do not expose them pretty soon no one will be able to discern fact from fiction...

Ad hominem attacks are not becoming of you.

You've clearly been down the path and done your research, so I'll take your word you know what you're talking about.

Like I said it was only for a moment because once you are exposed to the so called knowledge for the first time it is quite compelling and profound.. But as time went on I totally forgot about it until this thread popped up.

The universe and stars mean too much to me to ignore. But even so I wouldn't dismiss it completely and I'll just leave it as a possibility until there is irrefutable proof either way.

posted on Feb, 3 2017 @ 03:08 PM
link
With gravity being the white elephant in the room, I ask why do we have rain drops then, spherical droplets, not rain discs like pennies from heaven, only water pennies...

Flat Earth always sparks my interest. Not that I believe in it. But some people do..?.....

What attack? I apologized for not making my point in simpler terms that you can understand. That's not an ad hominem.