A Russian UFO website apparently told that in Rostov-on-Don, Russia, on January 14, 1978, at 06:00 a.m., three 18-year old men, Mikhail Babkin, Nikolay Leontyev and Vitaliy Kravchenko were in a room at the local sports complex "Oktyabryonok". They had been celebrating the passing of the old New Year with glasses of champagne and enjoying steam baths in the sauna and swimming pool, also eating mixed with some vodka. At 06:00 a.m., the watchman "proposed" that the young men go home and accompanied them to the rear exit of the building, through a long and very narrow corridor with concrete walls without window located in the basement area near the pool's walls. They were walking along the corridor in the following order, the watchman walking ahead, followed by Leontyev, then Babkin, followed by Kravchenko. Suddenly Mikhail seemed to trip, despite the narrow corridor and the smooth concrete floor deprived of potholes. He screamed and Leontyev turned around in amazement, not believing his eyes as he saw Babkin's shoulder penetrate into the concrete wall and in a moment Babkin's entire body vanishing into the wall. The stunned men began examining the wall with their hands, looking for any doors or openings, but their hands only touched concrete. Mikhail later told his friends that he had suddenly entered a small and dark room. To his left he could see an object like a medical examination chair. Across from him he could see a slightly opened door. There was a narrow window on the right wall of the room through which he saw treetops entirely covered in dense green leaves, moving about in a strong wind. Babkin was amazed as it was in the middle of winter, but outside this "window" it appeared to be summer and broad daylight. He was looking at a view of a fourth story floor whereas he had just been walking in an underground corridor. As if in a trance, Babkin moved towards the slightly opened door and pushed it open. He then entered another room, also shrouded in gloom. There was a round platform on the ceiling gaving off a faint light, and no windows. A similar "medical chair" stood near the wall. He felt very lightheaded and moving like a robot, he walked forward and opened another door, stepping into the strangest room yet. It was absolutely dark, with some bright areas visible in the inky darkness. The lights seemed to hypnotically influence Babkin. He became numb unable to look away from the lights. Suddenly he noticed several black humanoid figures that appeared in front of him, faintly lit by the pulsating patches of light. Their heads appeared rectangular in shape. There were five of them and they stood still in front of him. One of the humanoids, standing in the front, was slightly hunched over and appeared to be working some kind of device that gave off light. The device was not big, resembling a "corncob" with a pointy end; which was pointed directly at Babkin. The object emanated a very bright light but strangely it did not illuminate the surrounding area. Babkin then heard a male voice inside his head, saying "This one?" Another voice, also inside his head answered, "No not him". The first voice then said immediately, "Memory erasure is necessary". This phrase frightened Babkin terribly as he realized that it was his memory that was going to be erased. Horrified, Babkin seemed to snap out of his confused state and ran out the door and suddenly jumped back into the corridor of the sports complex, screaming inarticulate remarks. He heard a door closed behind him with a loud slam, when he turned around the door was gone. His friends had been searching for him for about an hour, running across the complex in complete despair. But Babkin said he had spent only five minutes in "that other strange parallel world."

posted on Feb, 3 2017 @ 01:17 PM
link
I love stories like this. This particular case makes me wonder if their drinks were tampered with. Neat story to ponder though. If it's true I bet it was a horrific and life changing event for those three fellas.
I've had some good Russian Vodka but damn... S&F

edit on 3-2-2017 by Illumimasontruth because: Spelling

posted on Feb, 3 2017 @ 02:12 PM
link
I've heard a couple similar stories in my private life and all I can say is, if true, then ... wtf? I guess it points to being in a simulation or lab with an alien (or future or past human) intelligence hacking reality.

Heck, in the enormity of time and the direction technology is taking us, being under observation in some lab simulation is more likely than not... or being in a future "video game" of sorts ... but that does not change our experiential reality, though it helps explain some of the weirder incidents people report.

And drinking and (most) drugs cannot come close to giving someone such an experience, especially with no fanfare and out of the blue. So... either a strange lie or a real experience.

Pretty weird life we are living ... and indications that reality is far huger and more malleable than the average Earth ape realizes, and that's true even IF such stories are bunk. Thanks for bringing this one to the forum.

thanks! also i find the vodka explanation a bit weird

thanks! also i find the vodka explanation a bit weird

Everything about stories like these are a little weird to me lol. I was being a bit sarcastic but I can't dismiss the possibility of the drinks being laced and/or some type of mind control being implemented. Just one possibility my mind finds.


The device was not big, resembling a "corncob" with a pointy end; which was pointed directly at Babkin


This description reminded me of the things that Annunaki gods hold in their hand, a 'corn cob' or pine-cone type of object.

I'd post a pic but i'm too tired to search for one.

originally posted by: doobydoll
This description reminded me of the things that Annunaki gods hold in their hand, a 'corn cob' or pine-cone type of object. I'd post a pic but i'm too tired to search for one. 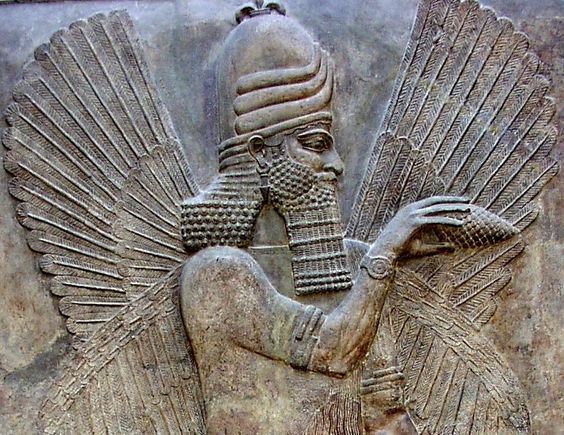 I didn't relate the "similar stories" because they are brief and don't add much.

I had a friend come out of a drug experience as a different individual. He later told us he experienced another full lifetime as a humanoid in another world... from birth to the day he "died" there. Then he awoke back here, with that other life vivid in his mind.

He said it gradually faded from his memory but it was absolutely real to him in every way.

Another related being perfectly sober driving down a highway on the Eastern seaboard (USA) and all of a sudden he was in a different world, with odd buildings and scenery ...and then was right back "here" a few seconds and a few hundred feet later.

Heck, I once saw (with friends) a huge circular array like the London Eye, except bigger (500 to 800 feet high)
with multi colored lights, looming over my city one night while driving. We drove towards it , lost sight of it due to a building, and it was gone a second later when we got back in line-of-sight.

When we drove to the intersection where we thought it was, there was only darkness and a huge empty lot.

And there are more... people winking out on busy streets, doorways in the air at night with sunlight streaming through in the desert, familiar streets changing for a day and then switching back... stuff like that.

posted on Feb, 3 2017 @ 05:25 PM
link
As a teenager, I used to read mystery stories about people disappearing when holes suddenly appeared in the ground. Then we had documented incidents of sinkholes appearing under buildings and people being dragged down. I read about stories of Californian Goldrush miners discovering underground caverns accessible from holes behind rocks.

For every mystery I've read about back then, there's been a documented real world event now. Half the story is quite believable - his friends tried looking around the building and couldn't find him. I've encountered that on a smaller scale when I see an article in a newspaper or magazine, then just can't seem to find it again unless I've written down the page number.

If he had fallen against a door with a latch lock, he might have appeared to disappear into a wall from the viewpoint of his friends, and then found himself in a a dark space. It would have taken him minutes to get used to the darkness. Meanwhile his friends have wandered off.

ooo, spooky!
1978, the light emitting thing must have been a laser pointer of some kind...before there were lasers wide-spread like today.

I thought I was reading a creative writing piece in the sci-fi realm.

Seems if they can just snatch someone so easily, they'd have snatched the lot of 'em so to erase this story from getting told.

Spooky none the less.

WOW im speechless!!!!!! you semns to have amazing experiences
could you do a thread for all THEM?

possible explanation however it still doesnt explain the humanoids

yeah could be lasers!

originally posted by: humanoidlord
interesting im not a buyer of ancient astronauts but still very weird

For about the last 6 months I`ve been trying to find a story about people running some kind of marathon in England, where apparently a runner was seen to trip and heard to cry out when he fell, but he literally fell into the road and disappeared, or so the reports said. It was meant to have happened late 19th early 20th century. We read it in a book with our teacher at primary school but I can`t find it anywhere on the net.

Also, one of my old friends, who was not into anything paranormal at all and had a very "basic" look on life told me and my friends how when he was younger, around 5, he was stood on a main road into Manchester and everyone went into old fashioned clothes and there was horses on the road and the shops were all old fashioned. He said someone rode past him on a bicycle and then next thing everything was back to normal. When me and my friends asked him what happened next he said his mum had took him to the priest and he was told to forget about it and it was stupid?

Like I say, he wasn`t into anything paranormal and had nothing to gain by telling us. It made him look a bit strange tbh, but still weird none the less.