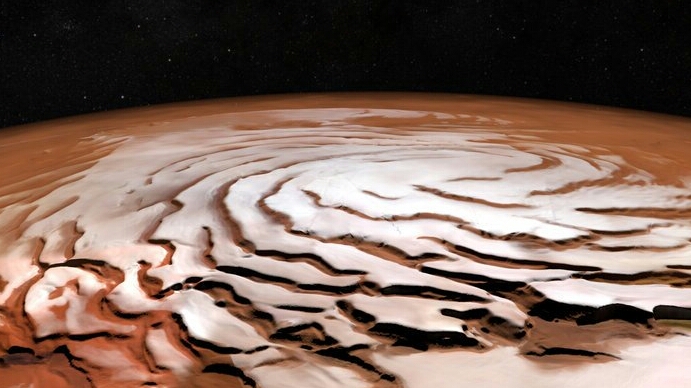 Besides that they really threw all conspiracy theorists a bone with this one: 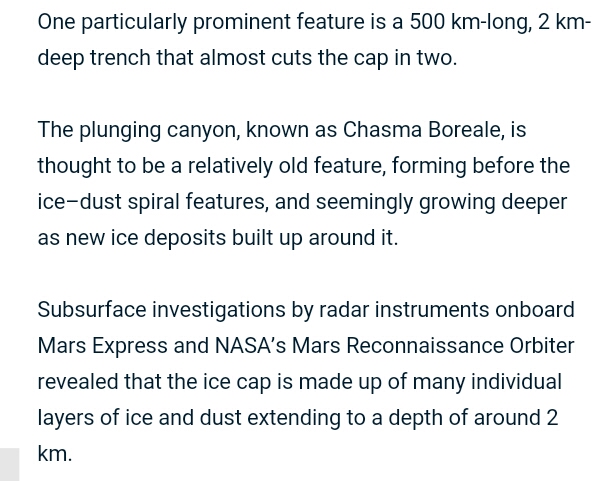 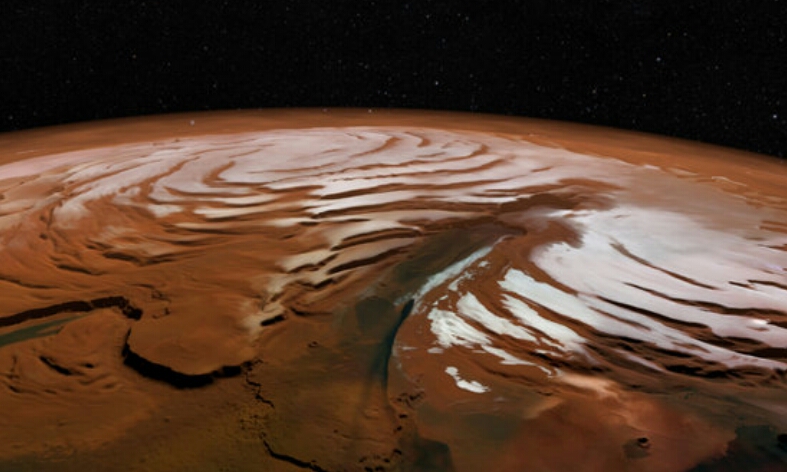 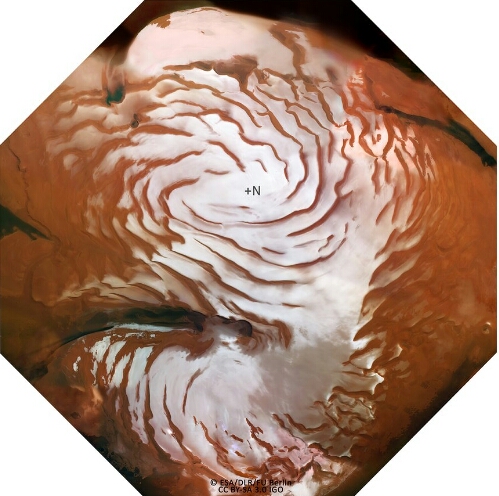 But the South Pole cap looks cool too:

Which is also from ESA's Mars Express imagery.

Still I do believe there is evidence of past life on mars and potentially (definitely in my opinion) also a civilization at some point indicating a past sentience on the planet and the face on mars at Cydonia which I do believe was attacked to try to destroy it with an air burst medium yield tactical device in a swap out probe that replaced NASA's own causing severe damage and one side to slide down in a resultant land slide, a destructive attempt to destroy evidence orchestrated by controlling vandal's who want to maintain there blindfolding of the public on certain matters and that that artefact actually suggested a human like presence so maybe one that actually originated on earth, cue lost civilization or species of human like being's before us and the whole potential for treasure troves of ancient technology's beneath the ground right here on the earth.

But that is all speculative so back to your thread, fantastic image's, hollow mars not withstanding, still it is not impossible just not my particular cup of tea.

I was a bit vociferous in my extremely belated comment on this earlier thread by mikesingh which outlines the possible attack on the face but it stand by my opinion.
www.abovetopsecret.com...

So now that is out of the way, best shot's of mars and truly beautiful view of a now probably dead world but as close as may of us will ever get to seeing it with our own eyes so once again thank you for sharing these.

Mars has no atmosphere. He might have had one, very likely. Even in Earth history at some point something drove people to live underground. Derinkuyu. Hopi legends. Those kind of legends really memorised, where the event has to mean something to be introduced into the cannon. Big flood like events. Like the Aborigines are more and more proven to be correct.
Point is, if life used that moment to develop than the environment changed they were already smart enough to produce O2...
Our plan with these small, igloo things is a really bad idea. Winds throwing around little rocks. Just saying. Thick layers of rock and frozen water, yes. Tents, no.
Here we have a tunnel going under the ice into rock. Downside is the evident strong wind, but if you only go outside with the Shields up, no problem.
So classic hollow planet isn't exactly what I was wondering.

Yes if we ever colonise the planet then likely underground dwelling's and facility's will be the best option, you make an excellent point about the high wind speed's on mars even though the atmosphere is thinner than if you stood on top of Everest and is basically carbon dioxide with a few other trace gas' thrown in to the mix.

They know as you say that Mars had a much thicker atmosphere in the past and probably a much, much stronger magnetosphere which is almost totally dead today and strangely arrayed indicating more than simply the core cooling and suggesting a more cataclysmic event which may have disrupted the Martian core which is only added to as a potential real event in the past when factoring in the massive Martian rift valley and of course the largest know volcano in the entire solar system named after the legendary Olympus, if the core was jolted before it more or less died this would explain the disrupted remaining asymmetric and almost erratic placement of the Martian magnetosphere as it exists today and this impact causing this event which disrupted the core such as a potential impact on one hemisphere of Mars also would explain the vast pressure release event which gave rise to both the Volcano and the Crustal crack which almost splits the planet in two.

Whatever happened if anything was alive on planet's surface when it did I doubt it survived the initial event, if any did though they would have had no choice but to leave mars if they had the means with what little they had and to head to any other habitat that may have offered even distant survivability, so if there had been sentient life there then the only port of call I think they could have made for, these few survivor's would of course have been the earth.

But for us to go back there today would be a potential history changer if we ever found evidence of this event, of course anything that disrupts the status quo and there entrenched belief's would be met with resistance and alternative idea's, the time line may be very long ago before humanity for existence according to cannon evolved and this would be a convenient get out of jail card for them so long as human like remains' stayed at an extreme minimum.

So if we ever to go there those colony's will likely be chosen to avoid certain region's that may, just possibly that is, contain any potential artefacts and the settlers will have to content themselves with normal geological analysis, experimental hydroponics and mineral analysis as well as setting up there primary first base as a hub for future endeavours and potential mining operation's etc, if the Martian core was disrupted in that such an event as outlined above then the are near to Olympus Monze would be a prime target for rare mineral deposits due to the likely extrusion of heavy and valuable minerals in this region but likewise the Valles Marineris region would also provide the option to find deep strata deposit's due to the depth of the rift so both these locations would be potential areas' for rare mineral extraction which may be how such mission's would be financed in the distant future.

As such sub Martian dwelling would indeed by the most logical and indeed likely method of colonization and indeed many of these venture's if they are ever made will actually more and more likely be entirely robotic in nature with no human's present.

Then again Three Dimensional printing, how long before we send out massive three dimensional printers into places like the asteroid belt were resources would be gathered, processed and used to print complex structures mining the asteroid belt in an almost von neuman like method as self replicating mining platform's and three D printing facility's self propagated to take advantage of the available resources as well as moving those resources into orbit around the earth and also potentially mars and constructing vast orbital facility's as well as potentially even habitats for actual people completely off planet.

Even if no sentience every existed there Mars would still remain a potential if we survive as a civilization and a species over the next thousand years and it may one day become a necessary way station for this logical step of mining the asteroid belt.

Of course we may deliberately limit our own numbers and also therefore our potential as a species becoming then an evolutionary dead end race and living in an agrarian society under a totalitarian system of government but if that is the future of humanity it is a grim one indeed so I dearly hope we break these bond's and continue to expand beyond the earth and to adapt to our new environment's as we do so in the coming century's, indeed I regard it as a necessary return to humanity's true potential, sadly there are some extremely self convinced elitist type's whom want the other future, people limited in numbers, a planet left mainly to nature and those few people allowed to live doing so in a tightly controlled society ruled over by an extreme minority.

Which mean's if you think about it the authors of the Florida guide stones are the enemy of Nasa.

Humanity has survived a lot just to get here and now we have people that want to impose limitation's on what we are allowed to become, stop our children from being born and to kill off anyone they don't want to have in there version of an ideal society thus stopping human evolution and adaptation dead and leaving the human race as a living fossil that will then no longer be able to adapt to the coming changes which will then lead to there inevitable demise as a species.

They have to leave the planet to survive as it is there true manifest destiny to do so.