Romania in the forefront for corruption

posted on Feb, 1 2017 @ 07:15 PM
link
Reading the News today, i ventured upon a single article that made my blood boil. Romania one of the most corrupted nations in the EU is looking at ways to decriminalize some official misconduct.
Even though i dont live in Romania, we feel the impact of its misuse and exploitation on other countries. A few try to pickpocket the needs of many.
For me and where i stand, a single misconduct done with "a" intention of exploiting your influence is already a criminal offense, the money is just the motive.
A once ruled nation with a fearful and righteous hand, they sat high up in the Carpathian Mountains and carried the name of Dracul, is this the nation that is left? Vultures feeding on the people, its a really sad scene to watch.

I hope they clean up the mess.. 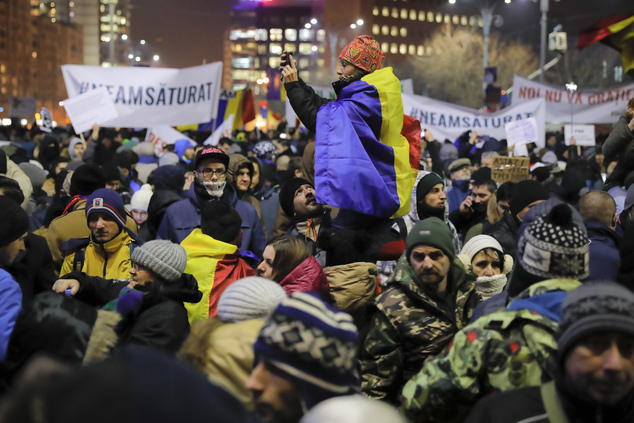 BUCHAREST, Romania (AP) — Protesters and riot police clashed sporadically in Romania's capital late Wednesday as tens of thousands demonstrated against the government for decriminalizing some official misconduct, a move that critics at home and abroad called a major a setback for the anti-corruption fight.

Article
edit on 201721 by tikbalang because: image

Have a little faith in Romanians, remember what happened to Ceausescu?

I have been to Romania... and a short visit has called for it to be called home ever since leaving. There are 2 worlds of Romania... the civil world and nature. There is a clear divide and Romania's nature is some of the most pristine wildernesses in Europe... not many places in the World offer such a still connection in time to the mid-evil times. Castles from the 1300's still stand strong as ever... on mountain tops no less... it's incredible!

The civil world offers little value to me anymore... geographic regions all have their ups and downs. As corrupt as the policy makers are, the people are strong, and the public opinion in Romania commonly steers judicial precedence in cases. It's almost like their news just repeats crimes over and over, until uproar turns into convictions... it's actually quite powerful to witness. I wish the public would pull together that well in the U.S.!

It's a tough hurdle to jump over when the currency is quite devalued as compared to the Euro. It's easy to manipulate terrain when there are no defenses afforded. 1 Lei there is equivalent to about $4 USD. My friend works 6 days a week for 60 to 90 Lei. They are all pulled together and have nowhere but to burst that built up energy out towards policy makers.

posted on Feb, 1 2017 @ 08:05 PM
link
I hope there is MORE effort and not just TALK, rumors say there are two officials that did something illegal, but never were prosecuted until this year.

Remember early in the year when that horrible night club fire happened in Bucharest? Well, it got some people up the chain a bit in some heat I remember... they apparently allowed previously shot down permits to be obtained anyway, and the scene was operating far past capacity.

For all I know, it's been steam rolling from that ever since?

When you hear what its all about, you get a headache... I consider when you offer a loophole, it will be exploited sooner or later.. Better not leave a loophole so a few gets off the hook, make an example.

Let's hope they can make an example! Tough one to swallow the dramas of since the just went through a revolution in 1989... scars are still fresh from that.

posted on Jul, 28 2017 @ 01:57 PM
link
Watch out for those "ABM" missiles there in Romania. You never know when those missiles will be the demise of the same people who have fun closing airspace for fun.