posted on Jan, 29 2017 @ 11:19 AM
link
With all the talk about the travel ban and protest at airports, this one may have been missed. The immigration executive order signed this week expands the power of individual immigration offers.

The immigration executive orders signed by President Donald Trump this week could amount to a vast expansion of authority for individual immigration officers and a dramatic increase in efforts to detain and deport undocumented immigrants.

But experts say the descriptions include virtually every person in the country illegally and give broad latitude to individual immigration officers to decide who should be detained for deportation.

Is anyone surprised by this? This is exactly what the man has been saying for over a year now.

In addition to a strain on resources, critics worry the orders could cause legal concerns.

Trump's order goes far beyond that, using a sweeping definition of "criminal" and giving a single immigration officer the ability to make judgments on threats to public safety.

As they should be able to do, who know's better then the boots on the ground?

The order says the priority will be removing deportable immigrants who "have been convicted of any criminal offense; have been charged with any criminal offense, where such charge has not been resolved; have committed acts that constitute a chargeable criminal offense; have engaged in fraud or willful misrepresentation in connection with any official matter or application before a governmental agency; have abused any program related to receipt of public benefits; are subject to a final order of removal, but who have not complied with their legal obligation to depart the United States; or in the judgment of an immigration officer, otherwise pose a risk to public safety or national security."

Experts say the order would seemingly include all undocumented immigrants -- a departure from Obama administration policies that extended some protections to those that have lived in the US for potentially decades and have otherwise been contributing members of society. The Obama administration offered formal protection to a group under the Deferred Action for Childhood Arrivals program, geared toward undocumented immigrants brought to the US as children who grew up here and were pursuing education or jobs.

Trump has said that such individuals are not his priority, that he wants to focus on removing "bad dudes." Nevertheless, his sweeping executive order would seemingly allow for anyone to be detained for removal proceedings, even if they have only been suspected of committing a crime, including misdemeanors, or of being a threat.

"I think it covers just about every illegal alien in the country," said Hans von Spakovsky, a legal expert at the conservative Heritage Foundation, which has been strongly influential on Trump's policy. "It's also very clear that the No. 1 priority is people who have been charged and convicted with criminal offenses, and that's the kind of violent criminals who should be out of the country."

Still, there's nothing in the current order that makes that clear. It places a violent criminal at the same level as a parent of US citizen children who works and contributes to their community, said Washington University law professor Stephen Legomsky.

"That strikes me as crazy," said Legomsky, who has served as a consultant to Obama, former President Bill Clinton and the George H.W. Bush administration.

I like crazy. How well did those last 3 administrations do as far as curbing illegal immigration? Legomsky sounds like someone who spent 24 years consulting Presidents and obviously wasn't very good at it. 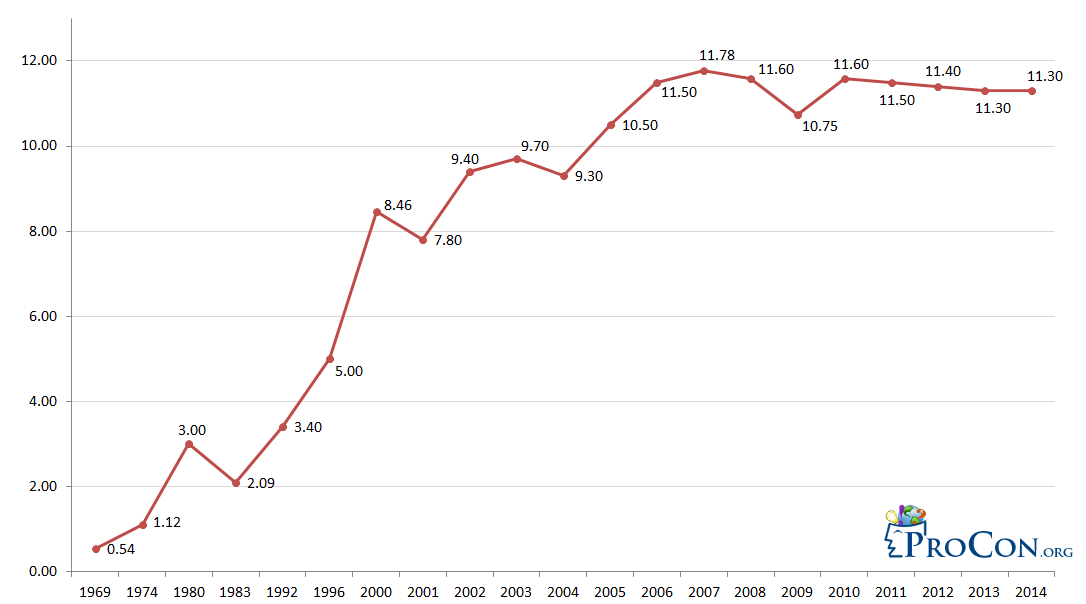 Notice on the graph that it fell off during the recession.

posted on Jan, 29 2017 @ 11:29 AM
link
Since the courts are shooting down some of his EOs I think it is best to take a wait and see about them. If he could just find some of those "best people" he talked about to advise him before having them written up and signing them I think it would save him and US a lot of hassle and taxpayer money. Couts are costly.

Yea, one thing we know for sure about Trump, he loves him some litigation.

Obama did the same thing though. Just go ahead and do stuff and then let the courts decide later. He lost supreme court battles more than any other president. We'll just have to wait and see if Trump can top him.
edit on 29-1-2017 by FauxMulder because: (no reason given)

have committed acts that constitute a chargeable criminal offense;

That would be all of them, being in the country illegally is an act that constitutes a crime.
edit on 29-1-2017 by Tardacus because: (no reason given)

have committed acts that constitute a chargeable criminal offense; have engaged in fraud or willful misrepresentation in connection with any official matter or application before a governmental agency; have abused any program related to receipt of public benefits; are subject to a final order of removal, but who have not complied with their legal obligation to depart the United States; or in the judgment of an immigration officer, otherwise pose a risk to public safety or national security."

Fraud or will misrepresentation in and official matter or before a governmental industry= SS worker and welfare fraud.

posted on Jan, 29 2017 @ 11:45 AM
link
I am just spit balling here but when new powers are given to people within enforcement it goes without saying that to make the role more dynamic they will give a "broad" outline of what can and cannot be carried out.

The situation I believe that has happened within the US is that for many years immigration policy has been one of turn a blind eye that opens up the issue of actually not knowing how many people are illegally within the US and as such just how big of a task it would be to remove said people that have gained access illegally..

Gaining access to a country via illegal means is a very serious offence, in many places around the world you will be put in jail just for overstaying a Visa let alone if you are there with zero documents, and who knows where you will end up if you have commited a criminal act on top of all that.

I keep saying it time and time again, all the previous stance has done is to "encourage" illegal entry and in turn that has made a total mockery of going through the correct channels to gain your access the right way.

President Trump is necessary. He is a bitter medicine for a West that has lost the plot and thinks it is beyond the target range of being totally sabotaged and subdued.

France and Germany are delusional. I don't like what was emerging from liberal politics. It looked and spoke more like fascism than anything I have heard President Trump say.

I wish the world could be all daisies and frolics in the meadows, but when horrific organizations like BDS (my nickname for them is IBS, lol) start growing like knotweed through the cracks of naivety in the same places that Hitler grew his nasty little triffids then it is time for a little rebalancing of the equation. The whole of the Muslim world would have supported BDS and convinced the West that Jews are evil, just like before, but NEVER AGAIN.

God Bless America, God Bless The Free World. Always keep a watchful eye on those who would destroy you from both within and without. Many fodder for a cause have been amassed through their own naivety and used as pawns in a game.

US Federal District Judge Edward Korman, has reaffirmed an Obama admin policy that grants officials the authority to search Americans’ laptops and other electronics without a warrant, citing a controversial premise that makes citizens within 100 miles of the border eligible for a warrantless police search.

I think many of Obama's policies are going to come back and bite the left in the arse now that the other party is in power. They never seem to think of these things.

That's what we're are seeing right now. Alot of these things that "Trump is doing" are actually policies and laws that his predecessors inacted. I remember the rights outrage when these things happened and the left said nothing...but now... "OMG, literally shaking and Trumps new policies!" lol.. where were they when they became law?!

posted on Jan, 29 2017 @ 12:46 PM
link
has anyone assembled a list of executive power created or used under Obama that the Left said nothing about that Trump is now using and they are crowing about?

I would love to see a meme that contained a list of those things.

This is what America needs to help get back on the right track.

i know.....so whos gonna do it? I'm too damn tired and mentally spent or else i would. Whoever does it should watermark it so they can claim firsties.

I'll do it but we only have a week to compare to the last 8 years. Maybe give it a little more time, collect some more info.
edit on 29-1-2017 by FauxMulder because: (no reason given)