The act of voting in America

posted on Jan, 28 2017 @ 12:21 PM
link
*My apologies for original post information. I'm not after an open system where everyone has knowledge of who each other voted for but I just want the individual voter to have a means to verify their vote*

Why aren't our *secret* ballot images accessible by an after vote confirmation for each individual voter possibly on the internet or through another viewing process?

Would that not promote integrity and decrease election fraud? If it's true that our machines we use to vote on can be hacked without a trace what can we do to make the ballot images accessible to the American citizen?

Is everything else not just a potential sham and pointless if we don't do something about the very act of voting in America? Isn't that priority number one for democracy?

Where do we start? Who do we petition? What will it take? Has this been attempted before? What were the roadblocks?

Please, share your thoughts and potential fixes for this so we can take action.
edit on 28-1-2017 by Gumerk because: Clarification

Why aren't our ballot images made public record and accessible on the internet?

Because it is none of anyone's goddamn business for who and what I vote for.

originally posted by: Gumerk
Why aren't our ballot images made public record and accessible on the internet?

Please, share your thoughts and potential fixes for this so we can take action.


Do you want people to look at A M's picture for instance?
However the machines should be kicked in to touch anyway. I have to ask though, why would you not know if the machines can be hacked or not?

A 2016 sample, even easier if you have intent, multiple times at the point of entry,

Anonymous voting is one of the bedrock principles of a modern democracy.

posted on Jan, 28 2017 @ 01:06 PM
link
a reply to: Gumerk
Secret ballots were invented to overcome the problem of intimidation.
Once your vote is made public, EITHER the KKK OR the BLM will be at your door before the next election to make you an offer you can't refuse. That's what you want?

originally posted by: DISRAELI
a reply to: Gumerk
Secret ballots were invented to overcome the problem of intimidation.
Once your vote is made public, EITHER the KKK OR the BLM will be at your door before the next election to make you an offer you can't refuse. That's what you want?


Or in the UK something far worse... Liberal Democrats!

What about the individual's right to view his/her ballot image through some kind of after vote confirmation?
edit on 28-1-2017 by Gumerk because: Clarification

And I FULLY agree.

Anyone who had their ballot fed into an electronic voting machine could very well get a quick receipt printout with a random number printed on it. It wouldn't even be hard to make sure there were no duplicates- simply use the MAC address model and have a portion of that random number be the UID for the machine.

Then all electronic votes would simply be loaded into a database (A few hundred million records isn't a big database) and you'd be able to go to a website and download the table, or query it for YOUR receipt #, and see YOUR vote.
Nobody would be able to identify it as YOUR vote, unless they managed to get YOUR receipt. Don't want one? Decline to have it printed, or toss it out. There's no personally identifiable information on it- just a number that references the votes that were just counted, and a time/date/location at most.

I've been making this argument for years, but nobody seems interested.

The best counter argument I've heard against it is that people would then try to use it to claim their vote was counted wrong, when in fact they just wanted to change their vote- so there would be an involved and expensive process of having the ballots tagged with that same UID as what's on the receipt, and being able to pull it out and deal with these people.
Which is a valid argument, to be fair.
The second best argument I heard against it was that people who did write-ins would have to be manually entered.
I disagree- they have to check the box for write-in, so the table could simply read "write-in". Unless there's more than a few percent of people voting for a write in, it quite literally doesn't matter what they wrote. OCR Could probably even identify a lot of the people who voted for Mickey Mouse.

This sort of system would give me a lot more faith in our voting system. I'd be able to confirm my own vote, and download the entire database to do my own count. It would keep the government, and employees, honest on their counts.
edit on 28-1-2017 by lordcomac because: clarification

The OP was edited (as confirmed now in the OP). Originally worded as wanting a public register.

Indeed, I edited the original post. My first wording was far off in terms of what I was after. I DO NOT want an open public registry but I do want a way for each individual to verify their vote afterwards.

Why aren't our ballot images made public record and accessible on the internet?

It's a matter of integrity...
You're own personal integrity doesn't matter.

Only the guy you voted for.

But if your neighbor found out you voted for someone other than who you said you did,
he might smash a watermelon in your driveway, or paint your car for ya', who know's why?

Why videograph an event unless it is used to convey/deny an exhibition of integrity?
Why is video considered evidence in a court of law?

Integrity should be exhibited by the governing body.
Otherwise any psycho could run for office...

Sounds interesting, thanks. How the heck do we go about making something like this actually happen?

posted on Jan, 28 2017 @ 03:40 PM
link
There is a lot of ongoing discussion about Trump calling for an investigation of voter fraud, so I think this OP is pretty interesting and topical.

I am wondering whether anyone here in the USA would consider something such as dipping their finger in indelible ink as part of the election process, to identify that they voted? It sounds pretty intrusive to me actually. (For example it would easily identify people who voted and who abstained from voting.)

A lot of other countries do that. There is even a Wikipedia article on this:

HOWEVER - I am not sure that the actual problem here would be addressed by such a system (or a system of receipts.) There might be a lot of hidden problems with tallying votes (not double voting.) The whole "chain of custody" seems doubtful to me.

Specifically, when I think about this, I think about a skilled magic trick. Somehow the coin disappears. How? It seems impossible but obviously there is just a lot of skill taking place to amuse you in making something disappear here and perhaps reappear there -- that is entertainment magic! A clever trick to amuse you!

What worries me -- How do we know that same "magic" and trickery isn't being applied to our election process, except happening on a hidden stage and not for simple entertainment purposes? Not in front of us and not for our entertainment?

I am never surprised to learn how clever hackers are, what amazing tricks they deploy, how skillfully someone can be deceived. There are a lot of victims in this world that don't even know they are being victimized. And there is a lot of fraud that nobody ever learns about.

Let's go ahead and have Trump verify things. It won't hurt, I don't think.

edit on 28-1-2017 by PassiveInductor because: Not so clear. Better now perhaps. 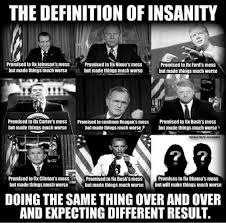 But I always go vote because it's a great place to pick up chicks!

Can't read the individual captions in your image. Tried to save it and zoom in but it's too blurry.

originally posted by: Gumerk
a reply to: olaru12

Can't read the individual captions in your image. Tried to save it and zoom in but it's too blurry.

Maybe that's the point- doesn't matter, each president we elect turns out to be against us

What do their quotes matter when it's always lies?

posted on Feb, 13 2017 @ 06:42 AM
link
From my understanding of the voting system. Not all voting machines are tied to a network. Therefore standalone machines cannot be hacked. The best way to prevent fraud, IMO is to provide a government approved ID. Have your name on the county roll is the way to confirm the person has the right to vote in the correct precinct.