posted on Jan, 20 2017 @ 01:20 PM
link
I've seen a bunch of these videos showing masked protesters spray painting things like "Revolution or Death" and "F*** Trump", smashing windows at Starbucks, McDonalds, and Banks, and even trying to break what look like digital parking meters.

Curiously, watching HLN News right now, they are saying "not all of the protesters are "anti-Trump", some are simply "anti-police", and that there seems to be a somewhat messy amalgamation of various different groups who have now blended into an indistinct larger group...


In the beginning of this first video they are chanting "Black Lives Matter", which isn't all that surprising since George Soros helped spend half a billion dollars on Black Lives Matter and wants to widen he divide between the masses.

In these videos you can see "protesters" vandalizing public and private property, and dragging newspaper dispensers into the street for more senseless destruction.

What is wrong with these people? Are they genuinely upset and this is how they are handling it, or are there paid agent provocateurs riling other stupid people up to follow suit?

It's not a good look for whatever "cause" they are trying to represent..

Some comments I've seen are claiming these are "anarchists" and "antifa" (anti-fascists). Whoever they are, it's not a good look... (maybe it's excelllent for whoever may be cutting the checks though)

The very last video is a live feed of the rioting

Go thru, zip tie their arms and legs and leave them for the paddy wagon...

Not to mention the signal it would send that we will no longer allow violent bullies to terrorize our citizenry...

Hog tie them all and broadcast it...

This is absolutely disgusting. America as I know it has turned into a sh*t hole.

posted on Jan, 20 2017 @ 01:25 PM
link
In the second video, what is the guy in the fluorescent jacket doing spraying a water pistol? Is he a police officer? Seems he was assaulted by these 'protestors'.

Well the ones with goggles on , faces covered and flags or stales want picking off for a start.
edit on 20 1 2017 by skywatcher44 because: s

posted on Jan, 20 2017 @ 01:27 PM
link
a reply to: underwerks
I believe these are the people who disagree with the slogan "make America great again".

originally posted by: underwerks
Is this the part where America gets great again?

Sometimes you need to flush the toilet to cleanse the bowl...

posted on Jan, 20 2017 @ 02:01 PM
link
a reply to: FamCore
Certainly the main group of Vandalizers all seemed to have matching new outfits for the most part...hmmmm.

originally posted by: underwerks
Is this the part where America gets great again?

Democracy means that not all of the people are pleased all of the time.

But every one gets a fair chance

And the turds are certainly rising to the top, aren't they? 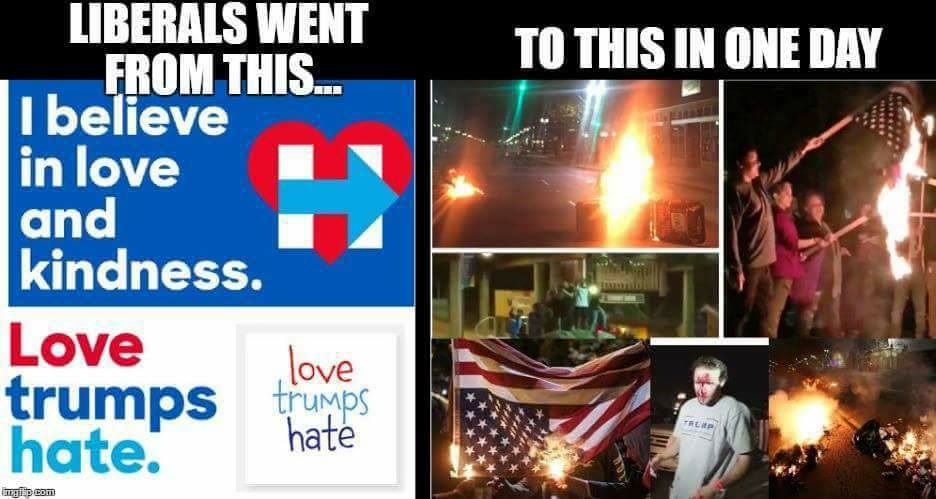 And they can't get over it.

And the turds are certainly rising to the top, aren't they?

which is a good thing, it makes it easier to scoop them out of the punch bowl.

Because these are the most loving, tolerant, and inclusive people EVAR.

Cops just have to Shoot Just ONE of these A Holes and the Rest will Flee like Lemmings over a Cliff . Some of these People Need to be Shot IMO ........

You are responsible for your own posts.

posted on Jan, 20 2017 @ 06:43 PM
link
Its been the same 500-600 with the basically matching outfits all day (Black clothing, black masks). They deemed themself an anarchist group against Trump, Hillary, and all from the start. The cops pushed all the groups together earlier, so now they're more dispersed. The vast majority of protestors there have done exactly as they should, but these guys have caused almost all the problems all day.