It could be a well known thing, I don't know.
As I was browsing a little true the CIA released dbase. I came across a reference to a German U-boot, salvaged by the Russians.
The strange thing is.. I can not find anything else on that submarine or the entire class.
The article states only 4 were ever build. And the one the Sovjets salvaged and rebuild in 1956, was the only one left of the 4.

So i did some searching, but i can not find anything about the U-boats they mention.

From the CIA artikel:
Only 4 ever constructed
Constructed at the Neptunewerft in 1944
Salvaged in the Baltic Sea

I looked here: uboat.net... But i could not find a boot according to the info in the article.

Here is the document: 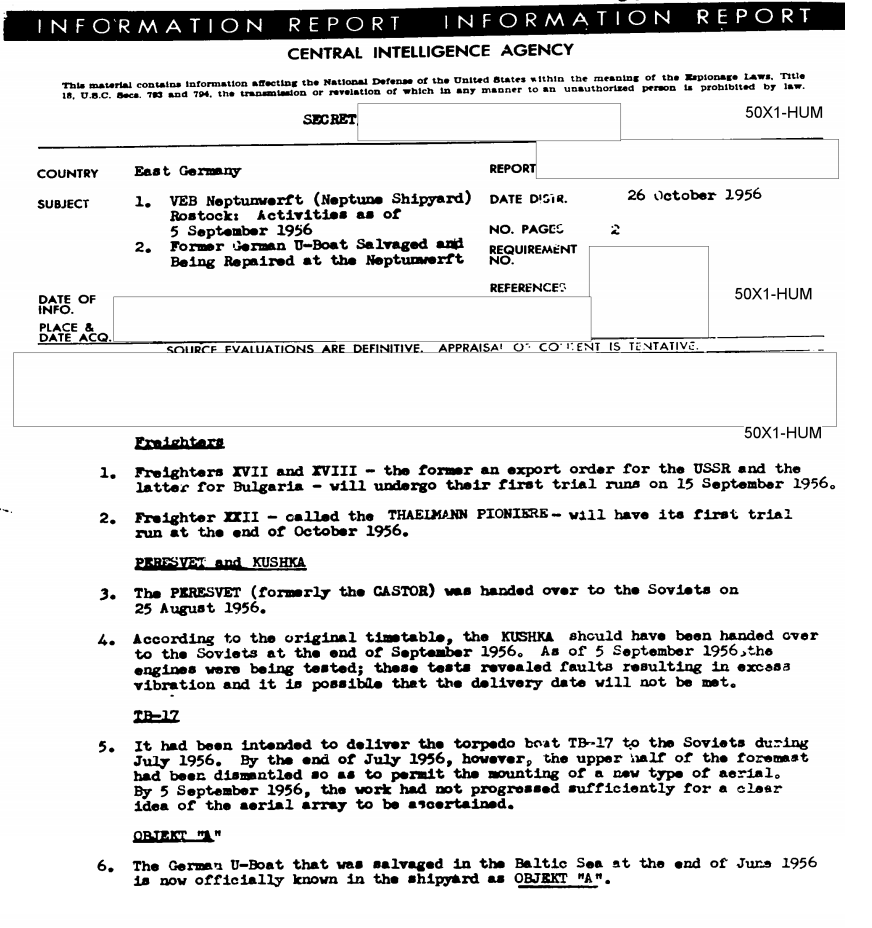 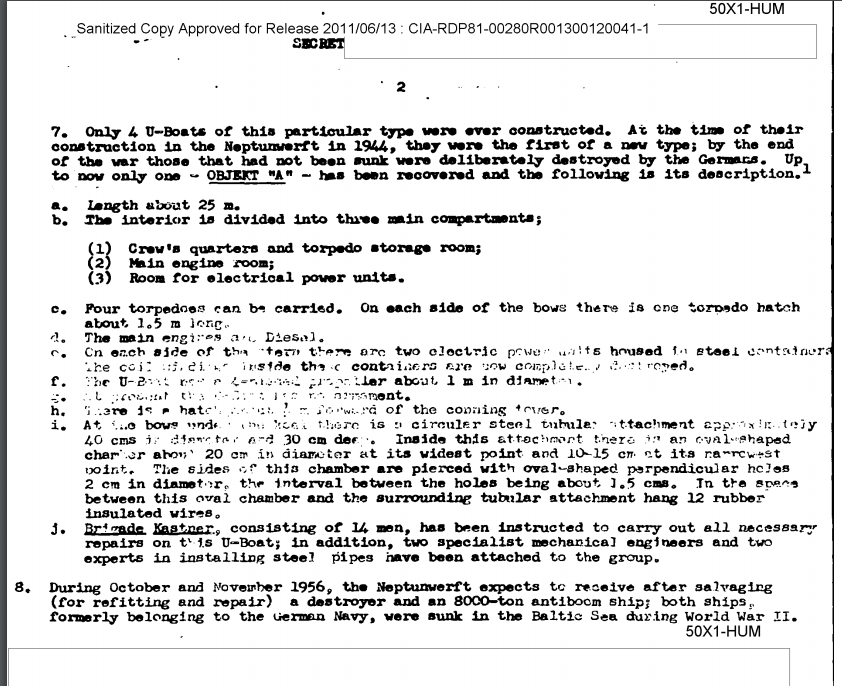 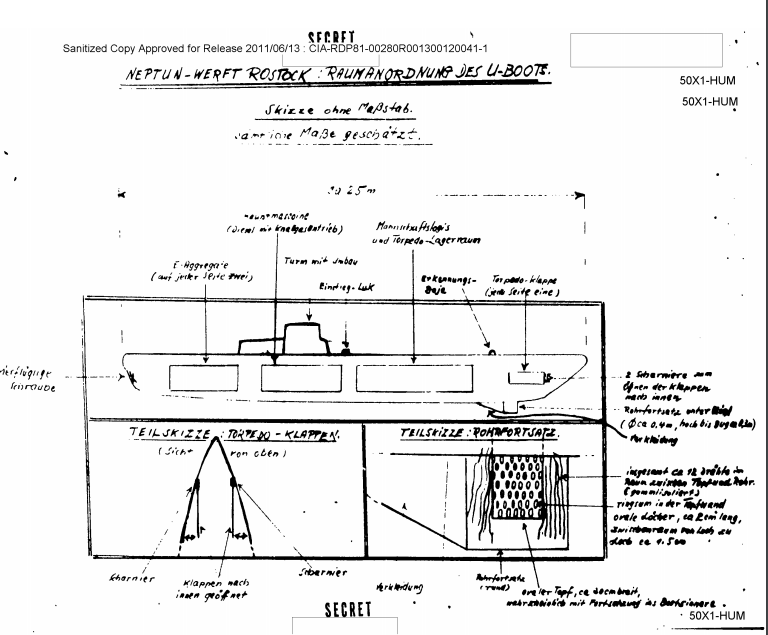 I looked for possibilities. Starting with only four built.

Type VIIF, this was a Type VII u-boat built as a torpedo transport ship, not even close to the description.

Type XVIIA - This seems the closest matching description. However the sketches of the Type XVIIA don't match up with the one in the CIA papers, nor were they all built in 1944. The first one was built in 1942 I believe. One was raised by the British after the war but no one knows what happened to it after that.

Tnx,
Did you also notice the "Rohrfortsatz" ?

That bulge under the front. Thats not common is it ?


It could be the first Magnetohydrodynamic drive

Don't underestimate the Germans
edit on 18-1-2017 by EartOccupant because: (no reason given)


It must be something special.

WHY would they dig up and RESTORE a submarine laying on the seafloor for 12 years ?

posted on Jan, 18 2017 @ 12:39 PM
link
Shhhhh! That's the super secret U-boat with the Zero Point energy motors that the Nazis used to get everybody to their secret base inside the Moon.

I try to write the hard to read part here:

e. On each side of the stern there are two electric power units housed in steel containers, The coils ..... inside the containers are now complete... ( Destroyed ? or ... roped ?)


Intrestring puzzel
edit on 18-1-2017 by EartOccupant because: made some mistakes.

They probably were thinking of small attack subs and this is the CIA after all so they'd just want something for a few operatives to get in and sink a ship and get out, they knew the Germans had worked on one and decided even if it was a bit rusty it could possibly be restored or at least give their tech guys enough info so they could build their own.

There was plenty of German brains from WW2 living in the US to help them along as well I'd bet.

You confuse me a little, It looks like you think this was an US restoration, that's not the case. This was a SOVJET operation and the CIA report above was the result of "spying".
And I highly doubt that they would spent that much resources to dive up, and restore a "simpel" submarine.

Something makes this sub seem special.

G. Hmm Armament, that could be..
H. I think the word were are looking for is "Keel" that makes sense, because it is the bottom of a boat.

G-"At present the U-Boat has no armament." I'm fairly confident in this one.
H-"There is a hatch (door/level) 1m forward of the conning tower"

All just guess work at this point really!
Good find though and an interesting read
edit on 18/1/2017 by constant_thought because: (no reason given)

Tnx for participating, but i think It's not a "seehund"

Seehund has 2 torpedo's strapped on the outside.

This one has internal storage of 4 torpedo's.

Ok lets fill that in:

e. On each side of the stern there are two electric power units housed in steel containers, The coils ..... inside the containers are now complete... ( Destroyed ? or ... roped ?)

g. At present the U-Boat has no armament. ( suggestion of constant _thought )

h. There is a hatch (door/level) 1m forward of the conning tower ( suggestion of constant _thought )

e. On each side of the stern there are two electric power units housed in steel containers, The coil (of each? too difficult to analyse the lettering, but one looks similar to the capital B in U-Boat below) inside their containers are now completely destroyed

g. At present the U-Boat has no armament. ( suggestion of constant _thought )

h. There is a hatch (door/level?) 1m forward of the conning tower ( suggestion of constant _thought )

Forgot about this thread and decided to give it another read. I'm not versed in the wording relating to u-boats or submarines in general, so others with more knowledge might be able to fill in the blanks better than I can pull from analysing the character formations.

They were larger - 39 meters than other min type submarines

Armed with 2 bow tubes and 4 torpedoes

Here is description of Type XV11

I asked on the U-Boat forum, but not find them very enthusiastic... or clear.
He starts with a type VIIC/41
Then changes to maybe a XXIII

I would think those sub guys would be more interested in something not on their record yet.

Unknown U-Boat Posted by: RK () Date: January 19, 2017 07:33AM Hello, I was browsing some old CIA files and maybe i have found a "new" old german U-boat. I put the information together here: [www.abovetopsecret.com] Is this a known sub?

Re: Unknown U-Boat Posted by: Rainer () Date: January 19, 2017 10:22PM There was indeed a U-boat recovered and taken to Neptun Werft at Rostock in 1956, but this was U-929 that had been scuttled off Warnemünde at the end of the war and was subsequently broken up. It had been the first of four of the improved type VIIC/41 that were built by the Neptun Werft, but only the first two were finished. So there seems to be some truth in this released CIA report, but most of it is inaccurate or simply wrong - "appraisal of content is tentative". Best regards Rainer Crew member of uboat.net

Re: Unknown U-Boat Posted by: Rainer () Date: January 20, 2017 07:14PM I studied the report more closely, for those interested it is available here: [www.cia.gov] In my opinion the report describes a type XXIII submarine, the "thing" under the bow is a Balkon-GHG (hydrophone). In fact one U-boat of this type (U-2344) was stored at the Neptunwerft in Rostock from its salvage in January 1955 until being broken up in 1958. However, the other information provided in the report resembles the story of U-929 which had been built by the Neptunwerft in 1944 and was one of only four U-boats of the new type VIIC/41 built there. Best regards Rainer Crew member of uboat.net

I found the lack of enthusiasm and the answer a bit disappointing.
Because before and after his answering i browset his site, and did not find the same facts as he stated.