Next Door to Mars is Psyche - An Asteroid Worth Quadrillions

posted on Jan, 17 2017 @ 02:52 AM
link
The price of any commodity is based on its demand vs rarity. if we landed that much iron then the price of iron would crash and be worth almost nothing.

Mining an asteroid being feasible will probably coincide with the feasibility of building space factories that process these minerals and make spaceships out of them.

Basically, what we've all been doing in computer games like EVE Online.

That much of such a dense material in one place...it would be fascinating to study it in more detail.

It would also be pretty damned cool, if in time we could hollow that thing out, and create some kind of spacecraft out of it, or at least a really well shielded space station.

originally posted by: Phage
a reply to: charlyv

Right now, the cost effectiveness of mining any of those is questionable. To say the least. It's going to take a whole hell of a lot of R&D before it's feasible. At some point it could well be.

But capitalism will do it's thing as it always does.

A good example is the oil industry.

20 or 30 years ago, oil companies found vast reserves of oil that they didn't try and drill/pump because the cost to do so at the time was prohibitive. As technology and techniques improved over time, it crossed the threshold on the cost/benefit analysis curve, and voila - those companies are now actively working those areas and making a ton of money in the process.

The same will happen in space. As soon as it becomes economically sound to do so - someone will do it.

You gotta love greed/capitalism. It really does drive innovation even if it also brings a lot of bad baggage along with it.

originally posted by: LumenImagoDei
I say we round up some oil rig workers, teach them how to drill and fly them to this asteroid to blow it up and collect the pieces afterward. Fool-proof plan.

You might be right that an oil rig would not be ideal, but a drilling apparatus could be rigged up on a body like that without having to resort to Star Trek physics in order to make it work. Its probable that the site would have to be prepared first, but if the body is mostly metal, they could probably weld some sort of rig to the body itself, anchoring it very well indeed, allowing a sturdy platform from which to drill.

originally posted by: TheConstruKctionofLight
a reply to: schuyler

"replicators" You had to go and use obcsenity...
why oh why...

They want to shut down talking heads...you think you'll buy replicators at the 711's? Or that us plebs wouldn't have been exterminated by then?

Obscenity? I was thinking more along the lines of "Tea. Earl Gray. Hot."

originally posted by: LookingAtMars
Psyche is a metal asteroid thought to be the naked core of a planetoid. The metal it contains is worth quadrillions of dollars. 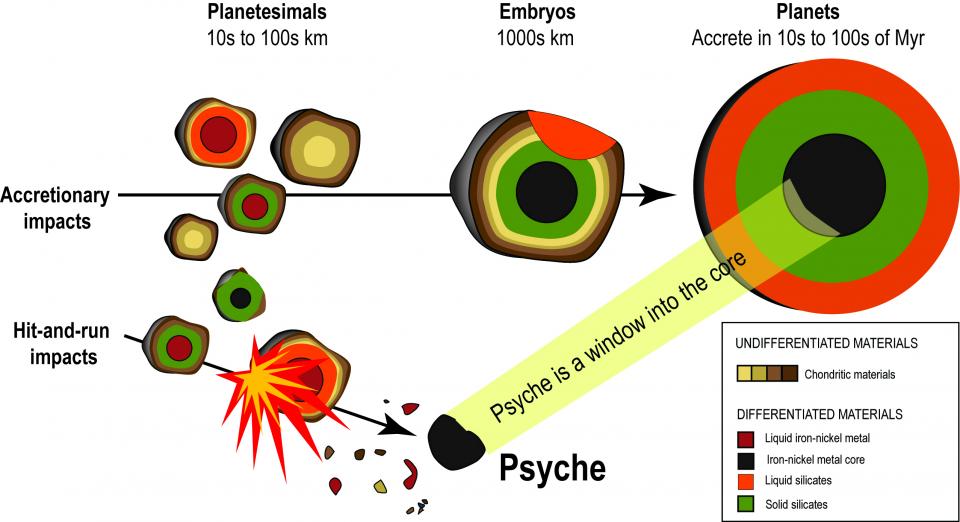 "You thought it was Mars we were interested in? Psyche!"

Seriously though, in all honesty we're probably way off.acomplishing something like this.just now, until.we.can find a cheaper way of getting into.apace...

I wonder if others may try to beat NASA. Space X or others.. I would love to see a full detailed analysis of what metals/elements are in this thing

My replicator would be producing Gelato or cannolli's non stop, and the occasional green sex star trek alien woman

Psyche: Journey to a Metal Wordl

The Psyche spacecraft is targeted to launch in October 2023 and travel to the asteroid using solar-electric (low-thrust) propulsion, arriving in 2030, following an Earth gravity assist spacecraft maneuver in 2024 and a Mars flyby in 2025. After a six-year cruise, the mission plan calls for 20 months spent in orbit around the asteroid, mapping it and studying its properties.

Ah, another sit back and wait mission announcement. 2030? That is like a long time from now! Even the current fusion devices will be done by then (2020 - 2025, up, performing plasma experiments). At least it is a "metal world" instead of "Easy Listening 70's gold"!

Maybe by then they can use a small version as a propellant source. Especially if the EMdrive thing works out. There needs to a shorter version of getting there than 7 years for any squadrillions to be made in pure profit

Look how long it took to assemble the ISS in low Earth orbit mine asteroids, ask us all again in about 250-500 years.

study & catalog the metal chunk of space junk, as per current plan of record...