for entertainment purposes to see what new insane stuff they came up with (Secureteam10).

Interesting timestamps to check out if you dont feel like watching the whole thing.

what kind of logic is that??

I think Secureteam10 gets an unfair bad wrap. Sure, Tyler goes a little too far sometimes in his assessments, but he's just presenting his take on submitted information and footage.

watch the footage dammit! who cares who is presenting it. watch the damn footage.
i have no clue how this went into HOAX after 2 minutes.

did the mods even watch the footage? do they have information regarding the footage? i.e has it been debunked somewhere?

you cant just move a thread into HOAX based on WHICH CHANNEL the footage is presented ffs.


is this the fuking twilight zone. by that logic youtube IN ITS ENTIRETY should be >> HOAX.
CNN. Infowars. MSNBC.

THESE ARE VIDEO PRESENTERS. _ITS THE FOOTAGE THAT MATTERS_

jesus christ almight what is happening to this site
edit on 16-1-2017 by SwagLord because: (no reason given)

originally posted by: Dr UAE
its because of this guy Secureteam10 i stopped believing in UFOs

Geez..if that's all it took I'm surprised you believed in the first place.


originally posted by: stosh64
a reply to: SwagLord

It has been talked about so many times most members dont bother anymore.

I'll check them out, thank you

ETA:
I found this post from Springer, an ATS owner.

We (ATS Staffers) have been struggling with the "YouTube hoax channels set up as click bait for ad revenue" issue for years...

I'd love to expose them all in a huge way but the old saying "there is no bad PR" keeps popping into my mind when I consider how to go about doing that.

When we find or are made aware of a thread on ATS that has one of these hoaxer's videos as the main topic we send them to the HOAX Forum. We publicly announce, from time to time, which channels have been proven themselves worthy of this distinction as a heads up to our membership.

The kind of people who create hoax UFO videos for no other purpose than to rake in some easy YT ad revenue are going to continue to do so as long as YT makes it a viable business. I'm happy to see our members don't want to help them.

ETA: It occurs to me that these hoaxers aren't just making money from lying and cheating, they're doing the dirty work for any organization that may want to make sure the topic never gets taken too seriously. edit on 1-10-2015 by Springer because: (no reason given)

originally posted by: SwagLord
i have no clue how this went into HOAX after 2 minutes.

Where else should footage go from hoax sites?

ITS THE FOOTAGE THAT MATTERS_

So why not just link to the NASA footage, why edit it and add music.... what is the point of the music?

The one great failing I find with ATS is that they love to kick the efforts of known bad guys into the hoax bin without a qualm. I know, I know, SecureTeam 10 has done/passed along a ton of hoaxes in the past. How many they are directly responsible for and how many they have simply past on. I doubt that the mod's finger on the hoax button doesn't really know the answer either. So cut it out and change the "Hoax" label to a question mark or something indicative of question, but a flat out "Hoax" tag is a shotgun overkill. After all, nobody can count the times that obvious hoaxes have graced the pages of ATS in other forms from individual, private hoaxers or from links to hoaxes in other media.

ATS may not like SecureTeam 10 and BTW, I have no love for them, but don't do our thinking for us with labels.

You need to calm your #SWAG down.

This is You right now... 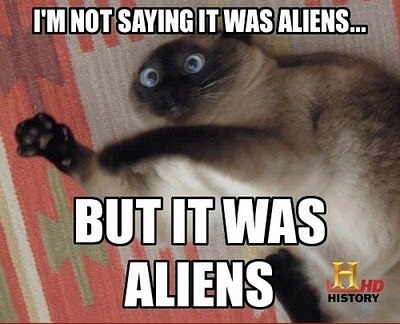 posted on Jan, 16 2017 @ 09:18 AM
link
so everyone is disregarding the footage cause it is presented by clickbait hoaxer?
i dont give any credence to secureteam10 and time and time again ive seen his videos and the way theyre put together are laughable and i wonder if he got the IQ of a deflated football.

BUT this footage still strike me as intriguing.

if anyone can find the original nasa footage then maybe we could have a proper discussion about it, and not focusing on the presenter of the footage

posted on Jan, 16 2017 @ 09:23 AM
link
While others and I are highly sceptical of this channel (and a few others) I gave it the benefit of the doubt as it is supposedly user submitted content.

The first main point in the video is just ridiculous, the others are a little more interesting however and there are a few ISS/shuttle clips that I hadn't seen before.

So, throwing it into the hoax bin doesn't really seem like the appropriate course of action. This isn't a hoaxed video as far as I am aware (although the "boomerang" ufo around halfway through is new to me, but I suspect stray hair), it hasn't been edited and it isn't a cgi ufo swooping around some guys back yard. It's just one guys interpretation of what these particles are. If that classifies the video as a hoax, then 99% of the posted ufo videos (and many other conspiracies posted here) should be moved to the hoax bin too.

The Hoax sub should be reserved for verified hoaxes, not just content providers we don't like. We're all too quick to yell hoax these days with no analysis. I am not seeing any cgi or misleading footage.

It's been explained that ATS would really rather not help out and give money to those who use videos that are not real or are hoaxes, because they are not actually interested in serious research in this area, but are out to make money instead, no mater what they have to do to make it, and no mater how much they damage the rep of this field.

For example: You have this guy that sells bottles of medicine, but you don't know what is in them. To find out what is in them, you must buy a bottle. So you do buy the bottle and open it up to find: Either sugar water or cough syrup.

The problem is: would it not be much better to know that every bottle you buy does indeed contain medicine every time?

By buying the bottles from the person that sells fake medicine, your are enabling that person to stay in business and to continue selling their fake bottles.

IF any of you that are griping about the video in the OP causing the thread to be here in the Hoax bin, here's a message from me (as a member, not a mod) to you:

Get off your rear end and do real research. You do not have to depend on some YouTuber that has edited the video.

Go to the SOURCE of the video and look at it RAW. That's what any good researcher, or someone that takes this field of research seriously would (and should) do: go to the source.

Once that video or film or picture passes through 3rd party hands, it has to be considered tainted at that point. Get the original.

So quit whining about who's YouTube channel is allowed and who's not. sercureteam10 most certainly did not go up to the ISS and created that video. Go to the source of who did instead.

All secureteam10 (and others like ADG(UK), etc) are doing is trying to make a quick buck. The more sensationalized the video and video title that they make, the more clicks they get, the more money they make.

Did y'all seriously think they wanted to know the truth about things?? HA......there's no money to be made that way.
edit on 1/16/2017 by eriktheawful because: (no reason given)