IF true, its disturbing how quickly events can be swept under the rug and forgotten. Also, if true, then like the video states.. there is no point in trying to predict any sort of astronomical relation, since its all been removed and re-positioned...

This is an original photo of Stonehenge in 1877 before it was dismantled / removed / and rebuilt with concrete 3 times between 1901 and 1958.

This is nuts - but where did he find those photos and that information? How did they "cover it up" from the public?

The excavating and re-digging etc. is not a 1-day project, and apparently this happened 3 separate times. I'm going to try to dig up some other sources on this.

Thank you for embedding it

posted on Jan, 15 2017 @ 11:50 AM
link
I don't see where you think the hoax is. It's pretty common knowledge that a large portion of Stonehenge has been rebuilt/repaired.

This has been known for years.

Stonhenge was becoming unstable ( well it is thousands of yaers old )

English Heriage decided to re-enforce and re-contrsuct the site for future posterity.

It was a case of either re-construck or loose it.

Which decision would you have taken ?

Not really a new story, I'm sure I've read threads on this before...


This is an original photo of Stonehenge in 1877 before it was dismantled / removed / and rebuilt with concrete 3 times between 1901 and 1958.


This is a picture of it today , compare the two.. 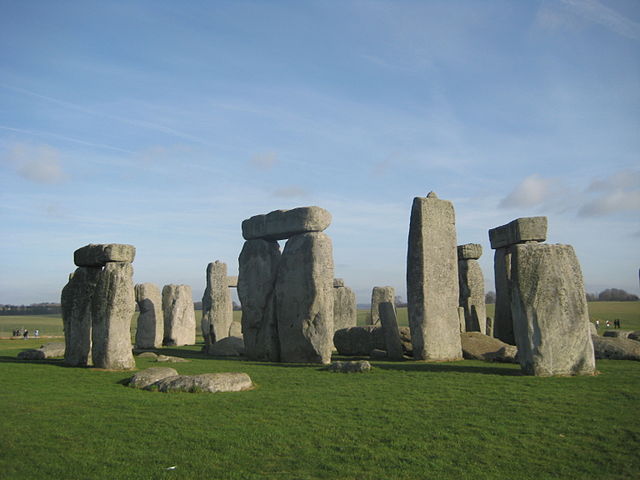 It was documented an archway fell and needed to be repaired in 1958.

NOT that the entire site was removed.. excavated, new holes dug, and concrete poured in. . .

Its a copy, a rebuild, a mimic.. and who's to know when the stones were placed in their original location.

Knowing that this is possibly true, pretty much removed all the mystery from the site for myself. The hands that placed it were no longer ancient pagans, mythical giants.. but cranes and heavy lift operators..


Im more so upset that it wasn't restoration, or a re-enforcement. It was a complete removal and rebuild to the specs of whom ever was hired to do the job at the time.

Well, its well known they did repairs, however the authors purpose is Christian young earth theory. Ya notice he has a "dinosaurs never existed" video right after this one?

Inconvenient things found un the dirt are muckin up his god story
edit on 15-1-2017 by BlueJacket because: Um


A little reaserch would have given you THE REAL STORY behind it's reconstruction.


_javascript:quote()
Since 1897, when the Ministry of Defence bought a vast tract of land on Salisbury Plain for army training exercises, the activities of the military have had an impact on the area. Barracks, firing ranges, field hospitals, airfields and light railways were established.[17] Some of these, such as the Stonehenge airfield, have long since been demolished, but others, such as the Larkhill airfield sheds, still stand and are important in the history of early military aviation.[18] Meanwhile, the introduction of turnpike roads and the railway to Salisbury brought many more visitors to Stonehenge. From the 1880s, various stones had been propped up with timber poles, but concern for the safety of visitors grew when an outer sarsen upright and its lintel fell in 1900. The then owner, Sir Edmund Antrobus, with the help of the Society of Antiquaries, organised the re-erection of the leaning tallest trilithon in 1901.


This was the start of a sequence of campaigns to conserve and restore Stonehenge – the last stones were consolidated in 1964.[19] The monument remained in private ownership until 1918 when Cecil Chubb, a local man who had purchased Stonehenge from the Atrobus family at an auction three years previously, gave it to the nation.[20] Thereafter, the duty to conserve the monument fell to the state, today a role performed on its behalf by English Heritage. From 1927, the National Trust began to acquire the land around Stonehenge to preserve it and restore it to grassland. Large areas of the Stonehenge landscape are now in their ownership. More recent improvements to the landscape – including the removal of the old visitor facilities and the closure of the section of the old A344 that ran close to the stones – have begun the process of returning Stonehenge to an open grassland setting, but there is more that can be done. English Heritage welcomes government plans to invest in a tunnel, which would remove much of the busy A303 and help reconnect the monument to its ancient landscape

I only saw this one video posted by him. I was more taken back seeing the entire site void of the stones, and then the machinery being used to place it all back with concrete.

so you pretty much believe that video.
the careful editing to fit what he is saying, showing the same pics, and showing 'reinforcement foundation for the stones to stand, and the fact that its all documented .. or the fact that this isnt uncommon with most ancient relics [pyramids extensive preservation efforts, machu pichu, chichen itza etc], otherwise would be just place holders of what was once there for generations to come

gotta love youtube and its endless users who now know the truth on every conspiracy ever.
edit on 15-1-2017 by odzeandennz because: (no reason given)

Yes the images of restoration work on Stonehenge are genuine.

This non-sense first appeared on ATS back in 2013. The claim then was that the images were from the KGB archives. I kid you not.

The You Tuber is telling you lies the same as the person that first started the KGB file website.

The image at 1:59 in the video doesn't show the Stonehenge site cleared.

View to the south showing a section of the circular bank which encloses Stonehenge. Constructed from chalk around 3000 - 2920BC, the bank would have originally have been gleaming white, and visible across the surrounding countryside.

The restoration images are not secret and are on the Historic England website. Read the captions.

edit on 15/1/2017 by tommyjo because: Malformed link corrected

Meanwhile over in Egypt.


What is being swept under the rug and forgotten?
If what is true? That it has been restorated?

There is no "if" about the restoration(s). Stonehenge was very publically restorated - it was even filmed, clips are on YouTube - it was never a secret, I even think there is a nearby plate or sign of some sorts commemorating the restoration work. It may not be common knowledge all around the world, but it is a safe bet that anyone occupied with Stonehenge to more than a just casual degree would know about it.

You are right, there is no point in trying to predict any sort of astronomical relation - but what we can do and do do is to come up with theories about and educated guesses on what Stonehenge was used for. We do not need the stones exact original position for that.

I had no idea the magnitude of the restoration. AS I'm sure many others did not either.

That's all. Regardless of what the author in the video is trying to push. I simply was only looking at the photographs.

I was never taught about the extensive restoration in school, or any field I ever studied. Nor any reference to it until today. I knew however, that certain users would chime in and spout their all knowing knowledge. I'm actually just waiting for Harte to show up next. But for the other 99.2% of users on this site. Its a good eye opener to the degree of tampering that could have, and has been done at this site.. and other sites around the world.