If they had more crazy # they would have put it out already.

Why do you think they're tweeting 5x a day "IF YOU HAVE SECRET DOCUMENTS, SEND THEM TO US AT THIS LINK!!"

I hope and PRAY they have more bombshells, but I think that last Podesta leak was the end of it.

The Podesta leaks abruptly stopped, at the same time that Wikileaks & KimDotCom who knows what goes on behind the scenes with them, were both acting like they were saving the biggest bombshell for last.

Unless that bomb shell is coming AFTER the inauguration, in order for Trump to be able to properly act on it, then I think they are just making this statement in case one of them gets killed.


I thought linking El Chapo to the Clinton foundation was the Bombshell. times.com.mx... 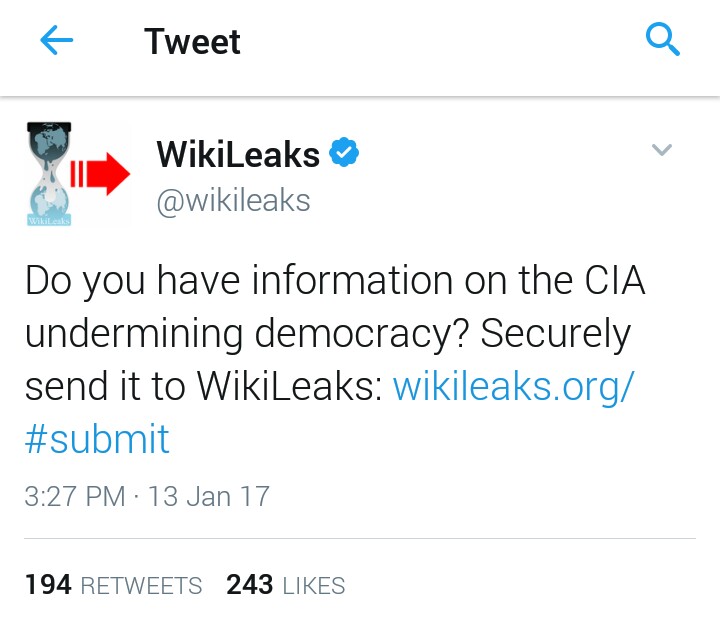 Watch and see the FDA™ or some other Alpha Bet Agency™ place EVERY WikiLeaks™ employee, and I mean EVERY ONE from Assange to the janitor, under arrest for violating HIPPA™ Laws...

This allows "Them" to defend their healthcare plan AND detain EACH employee until "They" get what 'They' want...

You can't violate HIPPA™ laws and live to type about it...

WHAT IF Wikileaks isn't in control of their organization, what if the new overlords want to keep the honey pot going, find all the nasty leakers and bring them to "justice"? Wouldn't a tweet like this be just the type of disinfo piece to keep up interest in the organization, and its followers?

It just raises public awareness and heightens already intense feelings and assumptions about a certain person's safety - and the safety of others.

i would like to see the evidence to support that claim


That just sounds like they are alluding to the idea that the CIA was their source and not Russia.

posted on Jan, 13 2017 @ 10:03 PM
link
While I am thankful for Wikileaks, their recent past behavior suggests this is just drumming up attention for continued donations and to stay relevant.

Yes, that makes sense now.
They put out the notice regarding no health conditions in advance of taking on the CIA.
That is indeed seriously a dangerous/brave/crazy move.

The health conditions notice is not going to help.
The DC Madam told people that she would never commit suicide because she feared for her life, then she was found hanging in a shed.
What WL said does not cover accidents with barbells falling on your neck, getting shot in a robbery where nothing is taken, brain aneurysm, and tons of other potentially fatal conditions.

posted on Jan, 14 2017 @ 12:11 AM
link
I still can't help but think they have been compromised. These tweets asking for info to be sent to them feel like a trap to me. The way they say "securely send it" just seems...I don't know... like they're the stranger trying get entice a kid to get in the car with them. Feels like someone who is no longer wikileaks is trying to find out who the leakers are.

If we're found dead from any issues related to these you will know it was foul play.

Bit dangerous though, what if one of them does die of natural causes or an actual accident?

posted on Jan, 14 2017 @ 01:21 AM
link
Lesson 1 about Wikileaks: you will learn nothing useful from it regarding the conspiracy or deception (including self-deception) plaguing mankind (including topics such as the NWO and the so-called "elite" or just political corruption and deception in general).

Tip 1: Avoid it like the plague and ask yourself: Why are the topics discussed by Wikileaks so popular in what the bible would refer to as "this system of things"? (Some people here might be more familiar with the concept of "the Matrix")

Lesson 2: Wikileaks will tell you what you want to hear, that which tickles your ears, captivates your attention or interest. They also like to overload you with useless details (thousands of mails to pretend that they've got all this interesting stuff for you to waste your time on, usually stuff people already know or have a pretty good feeling about that that is the case (nothing really new to them) as people remain ignorant of the real conspiracy or important deceptions and ringleader of that conspiracy and those deceptions (the one pulling the strings).

Tip 2: read my thread "One Myth Leads to Another" for actual information about what's going on, or you can choose "Guard against being deceived" (but that one is a bit more general, it does however address the one pulling the strings though and some methodology to look out for; it also tries to make people a bit less naive regarding their own trait involving the self-deception that they're not easily deceived, they're awake after all and not as naive or not as gullible as the so-called "sheeple", or those who are asleep to deception in their view, like religious deception).

Examples of misinformation and distracting stuff:

Clues as to why the people above have so many differing views about what's going on (the cause most people won't even consider, and those who do, are taught misleading things about it):

Who really rules the world?
What the h*ll is HELL anyway? Are you going there?
As the man in the video below more or less says, how long are you going to keep studying the symptoms and not look at the cause (I think he says "root")? Warning, this is Michael Tsarion who says this at the end of the video, but he's one of the ones who doesn't know anything useful about this, he just likes to make some money on this niche of telling conspiracy theories (usually with some book-selling to go along with it). It's a market, and they're selling a product (if you want to really learn something about propaganda, check my signature and the article link there).
Propaganda - Words Are Weapons!
And here are some things that wikileaks and the rest of the supposed truth seeker crowd will never mention anything about unless it's in error, misleading:
"you can't use his name!" (they treat it like it's the name Voldemort or something)
First Amendment Champions - Alex Jones Glenn Beck Ron Paul NWO End Times New World Order
A Unique Bible Exhibit
edit on 14-1-2017 by whereislogic because: (no reason given)

Think about it this way:

Julian's lawyer died by apparent "suicide" by train. Let that one sink in a moment. Add Hilary's rumored desire to drone him (plus a few other people who want to hang him; which builds up more reason to state what he did. (Those comments/reports can be found on you-tube un-edited, though the ones that say it; usually accompanies the words with "traitor".)


originally posted by: xuenchen
Could be an application to a life insurance company.


This was my thought's as well. It is insurance in case something happens. But it can also be insurance for the possible release of new info. I read somewhere that Wikileaks was ready to release a new batch. But it is mostly from unconfirmed sources so I won't link to them here. ( but it is worth mentioning the thought as a possible outcome/ reason.)

Looking forward to the next Wikileaks batch, hopefully it will be the death nail to the coffin of the MSM. Since ...they seem to have 9 lives.

posted on Jan, 14 2017 @ 06:17 AM
link
Perhaps Wikileaks call for people to leak the documents that Obama is allegedly destroying before he leaves office has been successful...

If Wikileaks are going to be targetted by the CIA, they are protecting themselves.

But equally if Wikileaks are now being run by the FSB, the FSB are perfectly capable of assassinating one of their own and blaming it on the CIA.


Believe nothing any of them say.

originally posted by: UKTruth
Perhaps Wikileaks call for people to leak the documents that Obama is allegedly destroying before he leaves office has been successful...

In your mind. Making up stories now? Adorable. The conspiracy theory community is falling apart. Hahahahahaha!


Assange, turn yourself in. The police have your dna sample. You raped two women. Time for justice to be served.

originally posted by: awhispersecho
I still can't help but think they have been compromised. These tweets asking for info to be sent to them feel like a trap to me. The way they say "securely send it" just seems...I don't know... like they're the stranger trying get entice a kid to get in the car with them. Feels like someone who is no longer wikileaks is trying to find out who the leakers are.


Wikileaks is an international organization with many members. If it was compromised one of them would say something. They are computer experts and would know if they are compromised and how to tell the world about it. Just to many people for nothing to be said.